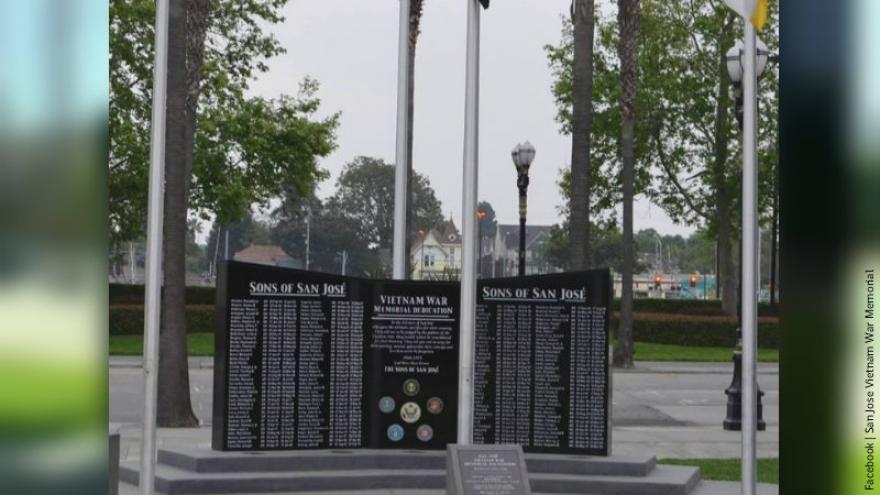 SAN FRANCISCO, Calif. (KPIX-TV) -- The “Sons of San Jose” Vietnam War memorial was vandalized with graffiti two weeks ago, and Google is picking up the tab to repair it.

The marble monument, which is located nearby SAP center, bore the names of 142 soldiers from San Jose who were killed in the war. Dennis Fernandez is one of the soldiers who served in the war along with classmates from his high school.

“The paint was an acid, so it burned through the granite and it left an etching,” said Fernandez. The tagging’s effect on the marble made it especially difficult and costly to fix.

“It’s crazy for someone to do something like that on a memorial,” Fernandez said.

On Thursday, Google announced that it’s making a $5,000 donation to restore the monument and pay for future maintenance.

“It was great news and we were very happy to receive their donation,” said Sandra Fernandez, a board member of the San Jose Vietnam War Memorial Foundation.

The memorial is on West Santa Clara Street, not far from the site where Google hopes to build a massive office, big enough to hold 20,000 workers.

When asked if this was a case of Google attempting to buy its way into the good graces of the community, most didn’t think so.

“I don’t think so, because it’s a war memorial and everybody honors and reveres veterans,” said Dennis Fernandez. He also said his main concerns are repairing the memorial and finding whoever is responsible for the graffiti.

“They hurt the families, you know the loved ones of those names that are on the wall. You hope they get better educated about the war and the sacrifices these men made.”

Repairs to the memorial should be completed by the end of the week.

The next step will be to use some of the money donated by Google to install security cameras at the memorial to make sure that any future vandalism is prevented.