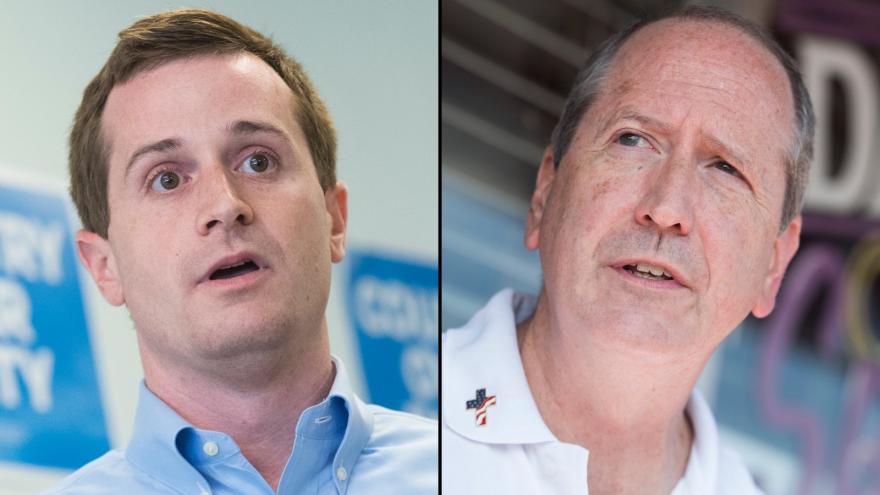 The result in the heavily Republican district comes as votes are still coming in from North Carolina's 9th District, where a much tighter race is playing out in the last undecided race from the 2018 midterm elections. The seat is currently vacant after the state's Board of Elections refused to certify results earlier this year after credible allegations of ballot fraud in the 2018 midterm election, causing the board to order a new election.

Now, nearly 10 months after Election Day, voters are choosing between Democrat Dan McCready, a Marine Corps veteran, and conservative state Sen. Dan Bishop. President Donald Trump is not on the ballot, but the results will be viewed largely as a referendum on the White House, and could offer clues for how the 2020 presidential election will play out.

McCready appeared to suffer a narrow defeat to Republican Mark Harris last November, but evidence of ballot fraud by a GOP operative connected to Harris surfaced before the results could be certified. Harris decided not to run again in the special election.

Bishop is best known for his lead role in passing North Carolina's "bathroom bill," legislation widely denounced as discriminatory and subsequently scaled back with the approval of Democratic Gov. Roy Cooper, who had campaigned against it.

Republicans should be dominating the district that Trump won by 12 points in 2016, but data that has been released to the public shows a close race.

Voters in the state's 3rd Congressional District chose Murphy, a Republican state lawmaker, over Democratic former Greenville Mayor Allen Thomas. The special election in the Republican-leaning district was called after Jones, who had represented the district since 1995, died in February.

Trump, who has sent several tweets in support of Bishop and Murphy, held a rally in Fayetteville on Monday night in an attempt to push them over the finish line. Trump cast the special election, and the 2020 presidential election, as a fight for the status quo, describing Democrats as the "America-hating left." Tuesday's results could show whether Trump's repeated attacks and attempts to paint progressive congresswomen like Reps. Alexandria Ocasio-Cortez of New York and Ilhan Omar of Minnesota as the face of the Democratic Party have swayed voters to the right.

The President had also held a rally earlier this summer in North Carolina, where the crowd in Greenville chanted, "Send her back!" as he railed against Omar, who was born in Somalia.

They added extra early voting hours in several counties over the weekend. Additionally, election officials extended the date by which absentee ballots could be received by 3rd Congressional District counties, as long as the ballots were postmarked by Tuesday.