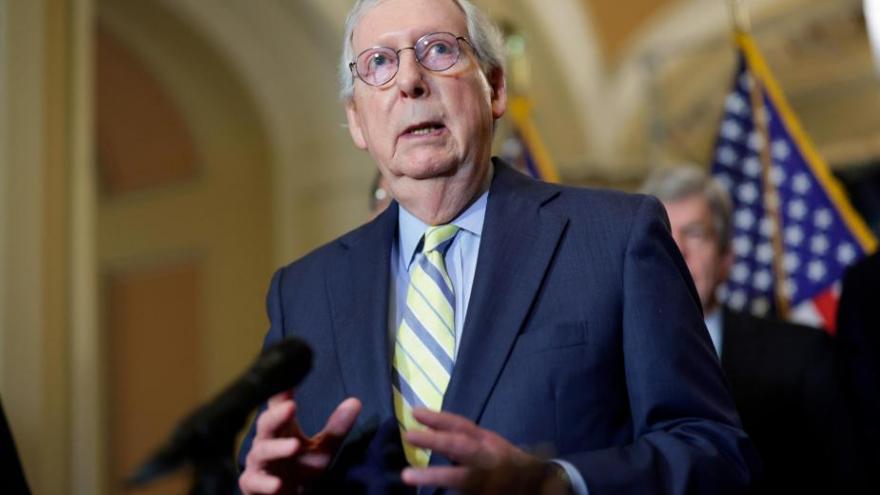 Republicans on Monday quickly shut it.

"I don't think it's really an appropriate topic for Congress to be passing a national law on," said Sen. John Cornyn of Texas, a member of McConnell's leadership team.

"That wouldn't be my priority out of the gate," said Sen. Josh Hawley, Republican of Missouri. "I think it would be better for states to debate this, allow it to breathe and for Congress to act where there's national consensus."

"I want to see the states have that opportunity and the authority to do so," Barrasso said when asked about legislating on the federal level.

The reaction of the Republicans -- pouring cold water on legislative action on abortion -- underscores the GOP's heightened sensitivity on the issue in the week after Politico obtained a leaked court draft and reported that a majority of conservative justices apparently were preparing to overturn the landmark Roe v. Wade ruling. Democrats, on the defensive ahead of the midterm elections, have seized on the issue in a bid to galvanize their base and rally around women's rights in a push to save their imperiled congressional majorities.

But Republicans are eager to keep the midterm debate focused on the economy, crime and border security, while recognizing that polls show a clear majority of Americans support keeping Roe even as their party may be on the cusp of securing a landmark victory on abortion decades in the making.

McConnell, last week, was keen to avoid getting drawn into a debate over abortion, instead training his fire on the unprecedented leak and calling for criminal prosecution of the leaker. But in an interview with USA Today, the Kentucky Republican mentioned generally that it's "possible" Congress could act to restrict abortion in the future. Yet he also promised he would not gut the Senate's filibuster rules to allow such a ban to pass with a simple majority, meaning 60 votes would be needed to act -- an extremely high bar to clear.

"If the leaked opinion became the final opinion, legislative bodies -- not only at the state level but at the federal level -- certainly could legislate in that area," McConnell told the newspaper. "And if this were the final decision, that was the point that it should be resolved one way or another in the legislative process. So yeah, it's possible."

Asked on Monday if he would put an abortion bill on the Senate floor in a GOP majority next Congress, McConnell didn't directly answer, instead pointing to his floor remarks where he said he would "never support smashing the legislative filibuster on this issue or any other."

"I addressed that earlier today," he told CNN.

Yet his comments suggesting action is "possible" quickly became Democratic fodder, as Republicans on Monday either signaled little interest in going that route or said simply there wouldn't be the votes to make that happen.

"It's about as possible as this vote we will take on Wednesday," said GOP Sen. Lindsey Graham of South Carolina, referring to the Democratic push to codify Roe, an effort that is certain to be blocked by a GOP-led filibuster.

Several other Republicans were noncommittal.

"We're still debating that," said Iowa Sen. Joni Ernst, a member of McConnell's leadership team. "I always believed the states should maintain that right, but we will see."

Sen. Shelley Moore Capito of West Virginia added: "Let's see what happens. I'm not going to get into what ifs."

Senate GOP Whip John Thune of South Dakota said he backs a ban on abortion with certain exceptions. But he quickly added that position may not be a consensus within the GOP and would not entertain the possibility that Republicans may seek action at the federal level.

"That's my personal position," Thune said. "That's certainly not a caucus position. I don't think we have any idea at this point about any of that."

Several House Republicans hailing from states that have already passed or introduced anti-abortion bills said they think the issue should be left to the states.

Rep. Jodey Arrington of Texas, speaking to CNN before the draft ruling was leaked, said that he supports "defining life at conception, but ... I think it's the proper constitutional view to let the states decide what their values are in the decision on abortion." Arrington said he supports a Texas law that bans abortions after about six weeks of pregnancy and only includes exceptions for medical emergencies.

Meanwhile, when asked whether he thinks a GOP-led House would vote on a federal abortion ban, Rep. David Schweikert of Arizona told CNN: "I don't think so, actually, because it would undermine the argument that this should be done at the state level." Schweikert said he supports a newly signed Arizona law that prohibits abortions after 15 weeks of pregnancy and includes no exceptions for cases of rape or incest.

And freshman Rep. Ashley Hinson of Iowa, who said she supports legislation in her state to ban abortions once fetal cardiac activity is detected that includes exceptions for rape, incest and to protect the life of the woman, said during a Washington Post live event on Monday that "ultimately, our states are prepared to make those decisions" on abortion.

"Obviously, every state is going to have a different outcome in terms of whatever that policy could be," she said.

Another reason why Republicans may be wary of trying to pass a federal abortion ban: They would have to come to a consensus on whether to include any exceptions. It's an issue that has previously tripped up Republicans, with House GOP leaders forced to pull a 20-week abortion ban from the floor in 2015 because of the provision related to exceptions for rape.

House Minority Leader Kevin McCarthy of California, who is in line to claim the speaker's gavel if his party recaptures the House, has previously said he supports exceptions for rape, incest and protecting the woman's life. But not everyone in his conference, which has grown increasingly conservative, agrees.

"I think within the pro-life community, there are people that think there should be exceptions for rape and incest, for example, and in the life of the mother when that's in peril," Arrington said. "I understand the sensitivity about the exceptions, and I respect that. But to me, the only exception is if the mother's life is in danger."

Arrington said there is far more agreement in the GOP on other anti-abortion bills that fall short of a nationwide ban, from seeking to permanently prohibit federal funds for abortio??n?? to banning the procedure after the 20th week of pregnancy. There is also a stricter measure that would prohibit abortions once cardiac activity is detected has more than 100 Republican co-sponsors in the House.?

However, those measures would surely be vetoed under the Biden administration. And, as Arrington acknowledged: "You still gotta get it through the Senate, which means 60 votes."