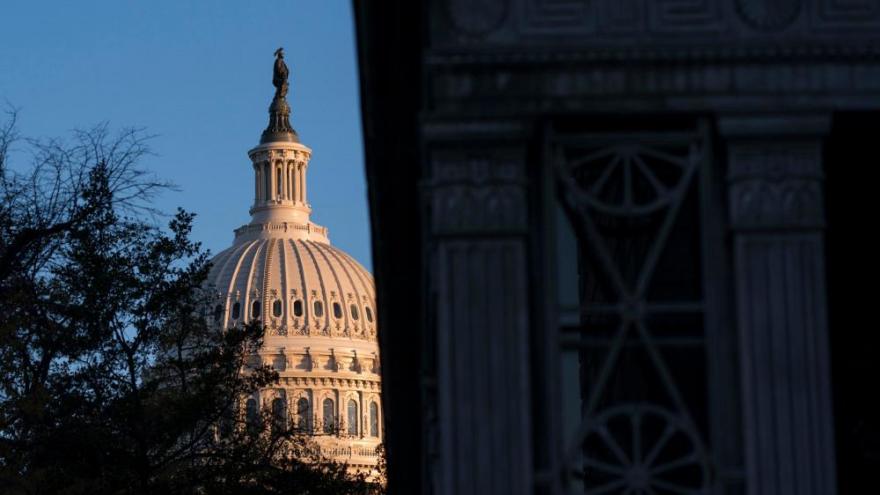 The Republican-led Senate Armed Services Committee adopted an amendment behind closed doors for the Pentagon to remove the names of Confederate generals from military assets within three years, according to a source familiar with the proceedings, just as President Donald Trump vowed to fight any such effort. The Capitol dome is pictured on November 13, 2019 in Washington, DC.

(CNN) -- A Senate plan to remove names of Confederate leaders on military assets has sharply divided Republicans -- and has now put a GOP-led panel at odds with the White House at a time of deep racial unrest in the United States.

The amendment, offered by Democratic Sen. Elizabeth Warren, calls for the removal of names of Confederate leaders from all military assets -- whether it's a base, installation, facility, aircraft, ship, plane or type of equipment -- within three years. The plan was adopted behind closed doors with the support of some Republicans, even as President Donald Trump condemned any action to remove Confederate leaders' names from military bases -- and the White House vowed to veto any such legislative effort.

"There is always a history that we don't want to forget," Sen. Mike Rounds, a South Dakota Republican who sits on the Senate Armed Services Committee, said when asked about the plan, which he supports. "With regard to that I agree with the President that we don't want to forget our history. ... But at the same time that doesn't mean that we should continue with those bases with the names of individuals who fought against our country."

The amendment comes at a precarious time for Trump, who has struggled to win support within the black community and has seen his poll numbers drop sharply amid his handling of both the coronavirus pandemic and the deep racial unrest caused by the death of George Floyd, an unarmed black man killed while in Minneapolis police custody.

The amendment put GOP leaders in an awkward spot -- stuck between their efforts to court black voters in a high-stakes election year and a President who demanded that Republicans tow the line and fight back on the amendment.

On Thursday, Senate Majority Leader Mitch McConnell declined to say whether he would support the plan, telling CNN: "That'll be up to the committee to decide."

The amendment was added to the annual defense authorization bill, and it could still be stripped out as it makes its way through the legislative process. If Trump were to veto such a bill, it would be a big risk given the popular defense measure sets policy for the Pentagon.

Asked if taking out the Confederate amendment would be politically problematic from a PR-standpoint, Senate Majority Whip John Thune acknowledged Thursday that it would be difficult.

"Well I mean if it's in the base bill coming out of the committee then, yeah," the South Dakota Republican told reporters. "It's obviously a heavy lift if we take anything out of the bil l... so, we'll see where that discussion goes. Like I said, I've seen what the President had said. I was not aware of that in there."

What adds more complication for Republicans is the fact that the defense authorization bill has been approved by Congress each year for the past 59 years -- so it will undoubtedly put pressure on lawmakers to resolve the sticking point in order to pass the sweeping policy bill for the 60th straight year.

Trump over the past two days has expressed his opposition to any such effort, citing America's heritage, while adding on Twitter on Thursday: "Hopefully, our great Republican Senators won't fall for this."

Some Republican senators were in line with Trump, including Sen. Josh Hawley of Missouri, who opposed the Warren plan.

"I just don't think that Congress mandating that these be renamed and attempting to erase that part of our history is a way you deal with that history," Hawley said. "I don't think turning your back on it's how you deal with it, confront it, and then move on."

Hawley added: "I've heard from a lot of soldiers who've come through those bases and they've said that those bases mean something to me I have my own history with those, please don't rename those."

Arkansas Sen. Tom Cotton also opposed the amendment, with an aide saying the GOP senator unsuccessfully sought a change to the plan to carve out an exception for memorials in military cemeteries for Confederate soldiers.

But it was clear the amendment had put some Republicans in an uncomfortable spot.

Sen. Marsha Blackburn of Tennessee, who also sits on the Armed Services Committee, wouldn't say if she backed the amendment in committee. "It's an issue that we're reviewing," she said.

Sen. Deb Fischer of Nebraska wouldn't discuss her view on the matter, while Sen. Roger Wicker of Mississippi said: "I think the commission idea has merit."

Wicker did not answer if he had voted for it in committee, but the amendment would create an independent commission to review and develop a detailed plan for removing the names.

Other Republican senators didn't want to weigh in publicly on the issue. GOP Sen. John Kennedy of Louisiana, whose home state has military installations with Confederate names, responded to questions about the amendment with, "I don't have anything for you on that."

And the lone black Senate Republican, Tim Scott, told CNN that he hasn't "given it much thought," when asked if he supports removal of Confederate leader names from military bases. Scott added that he's been "focusing on police reform."

Pressed further if he's open to keeping the Confederate names, Scott said he needs to "spend time thinking about the issue first."

Army installations named after Confederate leaders include Fort Bragg in North Carolina, Fort Hood in Texas and Fort A.P. Hill in Virginia. Army bases across the country have continued to bear the names of Confederate military commanders even amid intense external pressure to rename them.

CNN reported earlier this week that US Army Secretary Ryan McCarthy and Secretary of Defense Mark Esper are said to be open to holding a "bipartisan conversation" about renaming nearly a dozen major bases and installations that bear the names of Confederate military commanders, according to an Army official.

Peaceful protests calling for justice and a reckoning with racial inequality have dominated the US in the wake of Floyd's death at the hands of a Minneapolis police officer, prompting many to reconsider the status quo, including the widespread use of Confederate military leader names and symbols.

Yet some top Republicans expressed resistance to any changes.

Senate Armed Services Chairman Jim Inhofe, a Republican from Oklahoma, told reporters on a conference call Thursday that he had differences with the Democrats on the issue and that he wanted "local communities, cities, the towns, the states, to participate in whether or not they want to do this," and that the inclusion of the amendment was "the first step."

"We've got a long ways to go on that issue," Inhofe said.

The ranking Democrat on the committee, Sen. Jack Reed of Rhode Island, who was on the same conference call as Inhofe, agreed that the amendment was a "first step."

"I think what we saw yesterday was a very thoughtful process and a bipartisan process of taking a very complicated and difficult issue and putting in place a commission that will have a three year period of operation," Reed said. "That will carefully look at all the aspects of this issue, and will also be able to engage local communities who have an interest in the names of these facilities and conclude after that process a way to rename these facilities in a such a fashion that we do our best to maintain, I think, our fidelity to the Constitution and to the principles that govern the country."