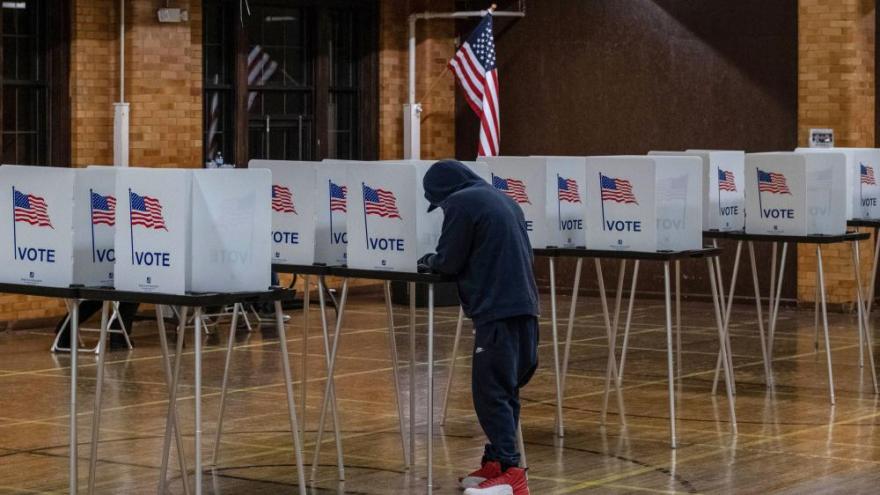 A resident casts his vote on November 3, 2020 in Flint, Michigan. Michigan Republicans' effort to get around Gov. Gretchen Whitmer's vetoes and implement new voting restrictions via a petition drive is set to ramp up this weekend, with a new push to gather signatures in time to meet a late-spring deadline and make the changes ahead of November's midterm election.

(CNN) -- Michigan Republicans' effort to get around Gov. Gretchen Whitmer's vetoes and implement new voting restrictions via a petition drive is set to ramp up this weekend, with a new push to gather signatures in time to meet a late-spring deadline and make the changes ahead of November's midterm election.

As warmer weather arrives in the Upper Midwest, "Secure MI Vote," the group behind the petition drive, is starting to dispatch hundreds of signature-gatherers across the state to festivals, parades, farmer's markets and outdoor sporting events.

It's the beginning of a sprint to a June 1 deadline. And "Secure MI Vote" is the highest-profile petition out of several being circulated head of summer deadlines -- including one backed by progressive groups and dubbed "Promote the Vote" that effectively seeks to undo the Republican effort.

The petition drive is the latest in a years-long effort by Michigan Republicans, seizing on former President Donald Trump's lies about widespread election fraud being responsible for his 2020 election loss, to halt what had been a Democratic-led march toward more expansive mail-in voting, early voting and more there.

"This is an easy sell," said Fred Wszolek, a veteran Republican operative who is working on the petition drive. "There are some folks out there circulating really complicated proposals that need explanation. If you tell folks that this is a proposal to require photo ID to vote, it's super simple."

Republicans in Michigan have been eager since early last year to implement new voter identification requirements and restrictions on mail-in ballots -- steps that other GOP-led states, including Florida, Georgia and Texas, have taken.

However, in Michigan -- a state more favorable to Democrats in recent elections -- they face two obstacles: Whitmer, the Democratic governor who vetoed a raft of GOP voting bills in 2021, and a constitutional amendment approved by voters in 2018 that guarantees everyone in the state the right to vote by mail.

Those hurdles have led Republicans to pursue an unusual quirk in Michigan law: If a petition for changes to the law is signed by 340,047 people, all that's required to implement those changes is the state legislature's approval -- effectively sidelining Whitmer and her veto pen.

Republican Party officials and right-leaning organizations across the state have broadly coalesced behind the "Secure MI Vote" petition. It would require voters to present their IDs to vote in person and to request absentee ballots, and remove an exemption that allows those without IDs to submit affidavits. It would also require partial Social Security numbers for voter registration, prohibit clerks from taking money from groups such as grants funded by Facebook CEO Mark Zuckerberg, and prohibit the Michigan secretary of state or local elections clerks from "sending or providing access to" mail-in ballots unless they are specifically requested by voters.

The petition comes after Michigan Secretary of State Jocelyn Benson, a Democrat, mailed absentee ballot request forms to all Michigan voters in 2020 -- a decision she said was fueled by the coronavirus pandemic.

Wszolek would not disclose how many signatures the group has gathered to date, but said that due to the number of different petition drives taking place at the same time in Michigan this spring and summer and the possibility of confusion among residents who might be asked to sign the same petition twice, organizers are aiming higher than the minimum number of signatures.

Majority Republicans in the Michigan House and Senate last year passed a series of bills that would have implemented new restrictions that largely mirror what other GOP-led states have done, but those bills were vetoed by Whitmer. Before the first-term Democratic governor who is up for reelection in November had even rejected the bills, though, Republicans were eyeing the petition process as a way to circumvent her veto.

Democrats say the changes Republicans want to make would impose unnecessary burdens in an effort to appease Trump and the former President's supporters.

"Their plan is to take away people's access to voting, in particular the rights of women and people of color," said Lavora Barnes, the chairwoman of the Michigan Democratic Party. "Their obsession with the former president is clouding their judgment when it comes to ensuring that our elections in Michigan remain fair and transparent."

The Michigan House last week again passed bills that Whitmer had already vetoed in 2021. It was a show of force, underscoring the reality that the GOP has the votes to green-light the changes to state law contained in the "Secure MI Vote" petition if organizers collect the necessary signatures.

"Michigan elections are vulnerable," Republican state Rep. Andrew Beeler said during the House's floor debate, the Detroit Free Press reported. "Now we're all here to vote yes on good policy. What we're not here to do is to vote on supposed motivations of bill sponsors. Yet whenever an election bill is brought before this House, it's been decried as racist or voter suppressionist."

Earlier this month, two Republicans who had embraced Trump's lies about the 2020 election won surprising victories in the primaries in special elections for state House seats. Robert "RJ" Regan, an entrepreneur who has backed Trump's lies and made troubling comparisons that led to his daughters urging people not to vote for him, won one primary. Terence Mekoski, a retired law enforcement officer who has said that auditing the 2020 election should be a top priority, won another.

"It's always been my message from Day One to give the government back to 'We The People,'" Mekoski told Bridge Michigan. "A forensic audit is nothing more than a full criminal investigation."

Democrats, meanwhile, are countering the "Secure MI Vote" petition drive with one of their own: "Promote the Vote."

Because Democrats don't have the votes in the state legislature to enact a new law using the same process as Republicans, they are instead using a different petition process -- attempting to gather 425,059 signatures ahead of a July 11 deadline in order to place a referendum on the ballot that would amend Michigan's constitution.

That amendment would guarantee a series of voting rights, including allowing voters to join a permanent absentee voting list and mandating nine consecutive days of early voting. It would effectively undo the GOP "Secure MI Vote" measure.

Other petitions being circulated by progressive groups include two from "MI Right to Vote," an Ypsilanti-based group that is seeking constitutional amendments to effectively bar new restrictions on voting and halt the use of petitions to change voting laws.