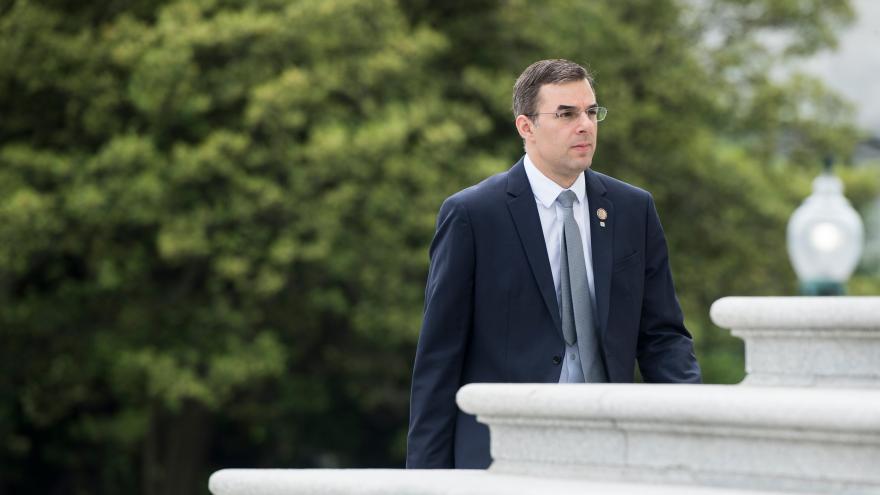 Amash's comments recommending Congress pursue obstruction of justice charges against Trump were the first instance of a sitting Republican in Congress saying the President's conduct meets the "threshold for impeachment."

Amash is a rare GOP critic of Trump and previously said Trump's conduct in pressuring then-FBI Director James Comey could merit impeachment. In a Twitter thread on Saturday, Amash said he believed "few members of Congress even read" special counsel Robert Mueller's report and that the report itself established "multiple examples" of Trump committing obstruction of justice.

"Contrary to Barr's portrayal, Mueller's report reveals that President Trump engaged in specific actions and a pattern of behavior that meet the threshold for impeachment," Amash said in a string of messages on Twitter.

While many Democrats have called for impeachment proceedings against Trump, many members of the GOP have agreed with Trump's assertions about the Mueller report and defended his conduct. For his part, Barr said the report established no conspiracy between Trump and Russia and that he and then-Deputy Attorney General Rod Rosenstein did not believe its findings sufficient to charge Trump with obstruction of justice.

Amash's comments on Saturday with regard to impeachment went further than even many members of House Democratic leadership. House Speaker Nancy Pelosi said last Thursday that "every day gives grounds for impeachment," while at the same time arguing that she doesn't want to impeach, though she did not rule out the possibility.

"[email protected] come find me in 1628 Longworth. I've got an impeachment investigation resolution you're going to want to cosponsor," Tlaib tweeted.

Amash -- a libertarian conservative elected during the Tea Party wave of 2010 -- was a founding member of the House Freedom Caucus, a key bloc of Republicans who worked to shift the GOP caucus to the right on many issues, but in the Trump era, he has found himself breaking with his conservative allies who have embraced the President.

Amash said on Saturday that he made his conclusions "only after having read Mueller's redacted report carefully and completely, having read or watched pertinent statements and testimony, and having discussed this matter with my staff, who thoroughly reviewed materials and provided me with further analysis."

He said Barr misled the public in a range of venues regarding the Mueller report, a charge Democrats and others have made repeatedly that the attorney general has disputed.

"Barr's misrepresentations are significant but often subtle, frequently taking the form of sleight-of-hand qualifications or logical fallacies, which he hopes people will not notice," Amash said.

Amash said "contrary to Barr's portrayal," Trump's actions "meet the threshold for impeachment" and that anyone without the unique legal protections of the presidency would be facing an indictment.

He argued that it was Congress' role to move forward with impeachment and accused people on both sides of the aisle of political motives, saying they had shifted "their views 180 degrees ... depending on whether they're discussing (former President) Bill Clinton or Donald Trump."

"Our system of checks and balances relies on each branch's jealously guarding its powers and upholding its duties under our Constitution," Amash tweeted. "When loyalty to a political party or to an individual trumps loyalty to the Constitution, the Rule of Law -- the foundation of liberty -- crumbles."

"It's sad to see Congressman Amash parroting the Democrats' talking points on Russia," McDaniel said in a statement.

"The only people still fixated on the Russia collusion hoax are political foes of President Trump hoping to defeat him in 2020 by any desperate means possible. Voters in Amash's district strongly support this President, and would rather their Congressman work to support the President's policies that have brought jobs, increased wages and made life better for Americans."