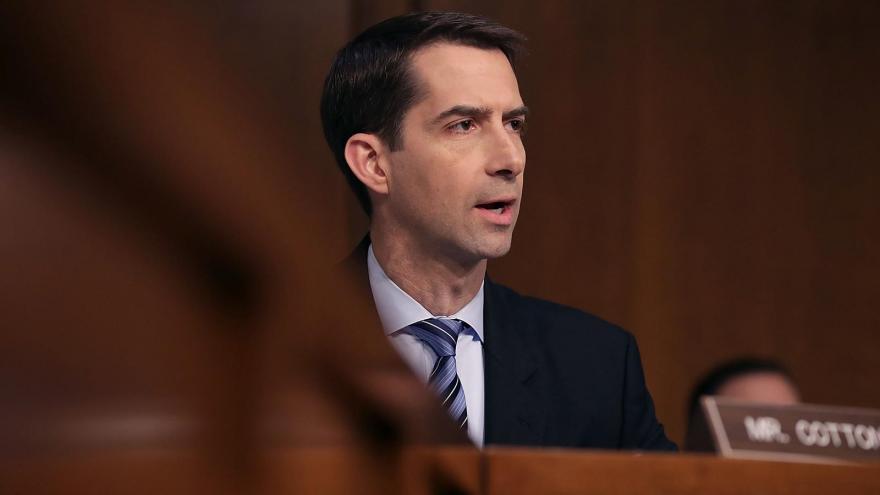 Republican Sen. Tom Cotton of Arkansas has introduced legislation that takes aim at the teaching of the 1619 Project, an initiative from The New York Times that reframes American history around the date of August 1619 when the first slave ship arrived on America's shores.

(CNN) -- Republican Sen. Tom Cotton of Arkansas has introduced legislation that takes aim at the teaching of the 1619 Project, an initiative from The New York Times that reframes American history around the date of August 1619 when the first slave ship arrived on America's shores.

A statement from the senator's office announcing the bill introduction states that the legislation will be titled the Saving American History Act of 2020 and "would prohibit the use of federal funds to teach the 1619 Project by K-12 schools or school districts. Schools that teach the 1619 Project would also be ineligible for federal professional-development grants."

The legislation appears unlikely to gain any significant traction in the Senate, but still stands as a way for the Republican senator from Arkansas to send a message.

Cotton's release states that "under the bill, the Secretaries of Education, Health and Human Services, and Agriculture would be required to prorate federal funding to schools that decide to teach the 1619 Project -- determined by how much it costs to plan and teach that curriculum."

The 1619 Project was launched by The New York Times Magazine last year. Following the launch, the Pulitzer Center was named an education partner for the project and announced that its education team would develop educational resources and curricula for use by teachers. The 1619 Project curriculum is available online for free through the center.

Editor in chief of The New York Times Magazine Jake Silverstein wrote last year in a piece titled "Why We Published The 1619 Project," that the aim of the project "is to reframe American history by considering what it would mean to regard 1619 as our nation's birth year. Doing so requires us to place the consequences of slavery and the contributions of black Americans at the very center of the story we tell ourselves about who we are as a country."

The idea was pitched by staff writer Nikole Hannah-Jones, who has spent her career writing about modern racial inequities and segregation and won a MacArthur Grant -- also known as a "genius grant" -- for her work in 2017. She won a Pulitzer Prize for commentary this year as a result of the project.

Hannah-Jones has responded to the bill introduction on Twitter, saying, in one tweet that, "This bill speaks to the power of journalism more than anything I've ever done in my career," and directing readers to the curriculum for the project.

"Would love if someone could surface the memo that has gone out to make the 1619 Project a right-wing talking point. Last two weeks been mentioned by Pompeo, Cotton, Trump and Cruz. The project published in August of *2019.*," she said in another tweet.

The President was recently asked in an interview on "Fox News Sunday" why he has claimed that children are taught in schools to hate their country.

Trump responded, according to a transcript of the interview by saying, "I just look at -- I look at school. I watch, I read, look at the stuff. Now they want to change -- 1492, Columbus discovered America. You know, we grew up, you grew up, we all did, that's what we learned. Now they want to make it the 1619 project. Where did that come from? What does it represent? I don't even know."