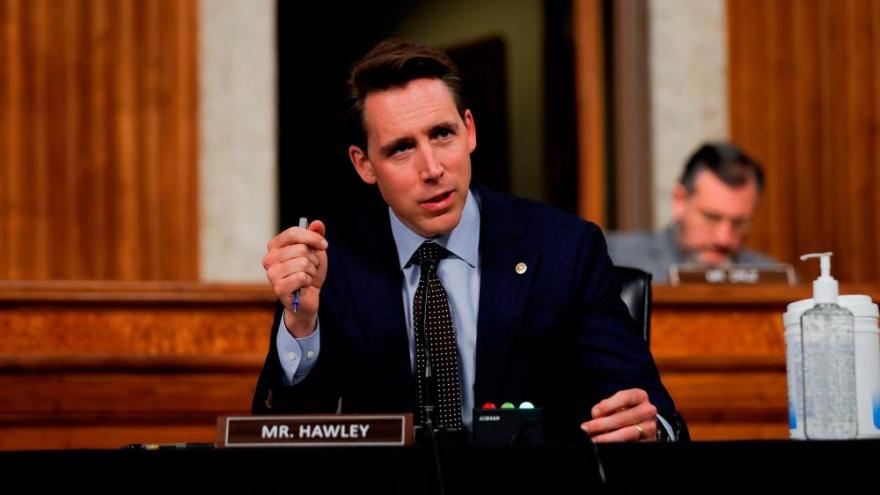 Missouri Republican Sen. Josh Hawley said he will object when Congress counts the Electoral College votes next week, which will force lawmakers in both the House and Senate to vote on whether to accept the results of President-elect Joe Biden's victory.

(CNN) -- Missouri Republican Sen. Josh Hawley said Wednesday he will object when Congress counts the Electoral College votes next week, which will force lawmakers in both the House and Senate to vote on whether to accept the results of President-elect Joe Biden's victory.

Hawley is the first senator to announce plans to object to the results, which is significant because both a House member and senator are required to mount an objection when Congress counts the Electoral College votes on January 6.

The objection will not change the outcome of the election, only delaying the inevitable affirmation of Biden's victory in November over President Donald Trump. Democrats will reject any objections in the House, and multiple Republican senators have argued against an objection that will provide a platform for Trump's baseless conspiracy theories claiming the election was stolen from him.

Hawley's objection, which other senators may still join, will also put many of his Senate Republican colleagues in a difficult political position, forcing them to vote on whether to side with Trump or with the popular will of the voters.

Senate Majority Leader Mitch McConnell has privately urged Senate Republicans not to join the group of House members who are planning to object. Senate Majority Whip John Thune argued against it publicly, prompting a rebuke from Trump on Twitter and the threat of a primary challenge.

McConnell has made clear to his conference that objecting is a fruitless endeavor that will not only prolong the process, but would force many Republicans to vote against Trump once that process is complete. McConnell's top deputies have shared similar views with members of the Senate GOP, aides say.

But that hasn't kept several Republican senators from keeping the option open. It's a spot that places them in between McConnell, who will continue to serve as the party's Senate leader and highest-ranking Republican in the country, and Trump, who will soon be out of office but whose power within the party, particularly with its base, remains unquestioned.

There's no evidence of widespread fraud in the election, and in a statement explaining his decision to object, Hawley did not raise allegations of widespread fraud. He claimed that some states, such as Pennsylvania, failed to follow their own laws, though the issues surrounding Pennsylvania's mail-in voting rules were litigated before the election. Hawley also complained about the way that social media companies like Facebook and Twitter handled content surrounding the election.

"I cannot vote to certify the electoral college results on January 6 without raising the fact that some states, particularly Pennsylvania, failed to follow their own state election laws," Hawley said. "At the very least, Congress should investigate allegations of voter fraud and adopt measures to secure the integrity of our elections. But Congress has so far failed to act."

Hawley also cited previous Democratic objections during the counting of Electoral College votes, saying just as Democrats were "entitled to do so," that "now those of us concerned about the integrity of this election are entitled to do the same."

If an objection is raised from one lawmaker in both the House and Senate during the joint session of Congress, the two chambers separate and debate the matter for two hours, before voting with whether to sustain the objection.

Rep. Mo Brooks, the Alabama Republican spearheading the effort to object in the House, said earlier this month Republicans were considering objecting to six states that Biden won, meaning as much as 12 hours of debate that would turn the process into a political circus and could spill into a second day of debate.

House Democrats objected to Trump's victory in several states in 2017, and also President George W. Bush's razor-thin Florida win in 2001, but no senator joined them and the protest died.

The last time the chambers voted on an objection was in 2005, when then-Sen. Barbara Boxer, a California Democrat, joined with then-Rep. Stephanie Tubbs Jones, an Ohio Democrat, to object to Bush's Ohio win. Hawley cited the objection in his statement Wednesday.

But Boxer told CNN earlier this month the circumstances of the objection were starkly different to the GOP efforts to overturn Biden's election win.

"Our intent was not to overturn the election in any way. Our intent was to focus on voter suppression in Ohio," said Boxer, who has retired from the Senate. "They're talking about the vote that the presidency was stolen from Donald Trump. It's not even a close comparison."