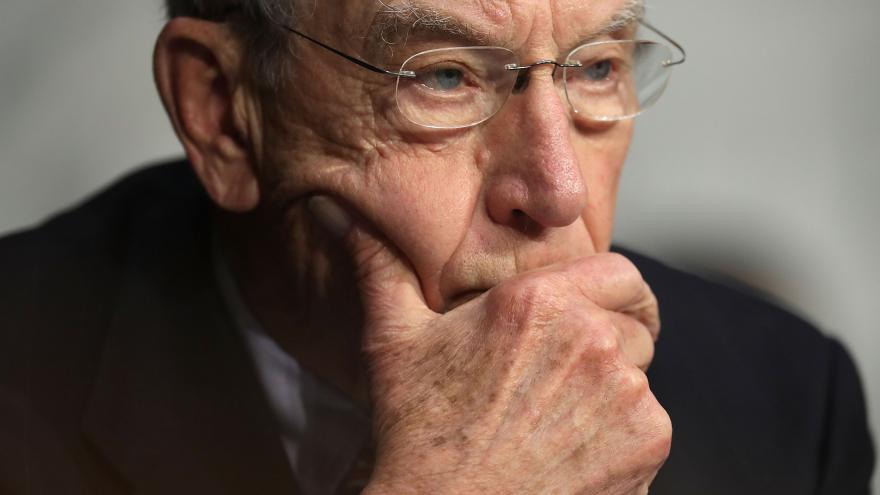 (CNN) -- Two Republican senators who traveled to Iowa Friday with Vice President Mike Pence -- just after it was discovered Pence's press secretary had coronavirus -- said Monday they have not been tested for the deadly virus and don't plan to get tested now.

Sen. Chuck Grassley of Iowa, who is 86, said he is relying on the public comments from Pence's doctor that the vice president does not have the virus as the reason he is not being tested and is not self-quarantining.

Grassley was asked why he hadn't sought out testing to ensure he is healthy, something that could protect his staff and other people near him.

"All I can do is take the advice of doctors," Grassley said, adding later, "I'm talking about the advice that the (vice president's) physician has made public just through his public comments."

A Grassley aide, standing with the senator, further explained that if Pence -- who is tested regularly -- had the virus, the vice president's doctor would follow procedures and contact the senator and that hasn't happened.

GOP Sen. Joni Ernst of Iowa also said she didn't plan to be tested, "because I haven't been with anybody who has it," she said.

Asked if she has any concerns the virus could spread from Pence's press secretary to the vice president to her, she replied, "No, I don't."

The senators spent a long day with Pence flying on Air Force II to Iowa for coronavirus-related events. Their flight was delayed for more than an hour as news spread of press secretary Katie Miller's positive coronavirus test and then several Pence aides who had been in contact other Miller disembarked and did not travel to Iowa.

The situation for Grassley and Ernst comes as lawmakers are debating whether to institute instant testing on Capitol Hill so members who travel all over the country every week can be sure they are not exposing the traveling public nor their constituents back home. House Speaker Nancy Pelosi and Senate Majority Leader Mitch McConnell turned down an offer from the White House to provide instant testing for members, saying the tests should be made available to frontline health care workers and others before lawmakers.

Sen. John Thune of South Dakota, the second-ranking Republican leader, said "it would be a fair expectation" that Grassley and Ernst could be tested right away, but didn't know when or if the testing issue for members would be resolved.

Thune said Ernst told him she had not had contact with the people who were pulled off of Pence's plane "with the exception of the vice president."

Thune added: "I do think from a testing standpoint, there is a good rationale that if somebody's been exposed in some ways to somebody who has it, yeah, you got to test them."

Senate Rules Committee Chairman Roy Blunt, a Republican from Missouri, said he supports testing for members but said the leadership had not come to any conclusions about whether to institute it.