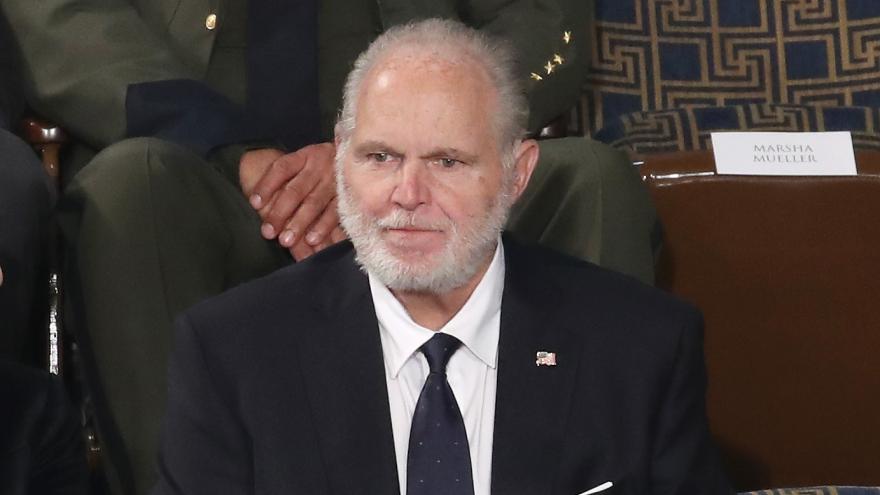 (CNN) -- Florida's governor announced he'll order flags in the state flown at half-staff to honor the late conservative radio host Rush Limbaugh, whom he called "an absolute legend" and "a great person."

"Once the date of interment for Rush is announced, we're going to be lowering the flags to half-staff," Gov. Ron DeSantis said Friday at a news conference in West Palm Beach.

The governor said the honor is "what we do when there's things of this magnitude."

The move doesn't seem to fit the state's flag protocol, which calls for flags to be flown at half-staff "in the event of the death of a present or former official of the Florida State government or the death of a member of the Armed Forces from Florida who dies while serving on active duty."

DeSantis said Limbaugh, a Palm Beach resident who died Wednesday at 70, "was an absolute legend, he was a friend of mine and just a great person."

"Rush Limbaugh weaponized his platform to spread racism, xenophobia and homophobia across the nation," she said in a tweet. "His constant hateful rhetoric caused untold damage to our political landscape."

Florida Senate Democratic leader Gary Farmer issued a statement Friday calling DeSantis' flag order "a partisan political tool to salute a man who served no other interests than his own and did his best to deeply divide a country along political fault lines.

"I condemn the governor's decision in no uncertain terms. Any move to lower our flag in deference to a man who helped drive the hatred and inflame the prejudices against marginalized groups, people of color, women, and anyone who did not look like him or think like him is wrong, and should be rescinded," Farmer said.

Announcement made at mostly maskless event

Palm Beach County officials are now investigating the Hilton Palm Beach Airport Hotel after receiving reports that many of the more than 100 people who attended the indoor event there were not wearing masks, Palm Beach County Deputy Director of Public Affairs John Jamason told CNN in a statement.

A mask mandate aimed at slowing the spread of Covid-19 is in effect in the county until March 19. Facial coverings must be worn by anyone obtaining any goods or services, or otherwise visiting or working in any business or establishment in the county.

"We have spoken to Hilton management and will be following up with them and event organizers in accordance with our normal compliance procedures," Jamason said.

A Hilton Palm Beach Airport spokesperson said in an email to CNN that, in part, "We have been made aware of video that appears to show a group of individuals within close proximity of one another and not wearing masks. We are disappointed in their apparent failure to comply with our mask regulations which are prominently displayed throughout the hotel. Moving forward, we will continue to do our best to monitor and enforce these guidelines as long as they remain in place."

The Palm Beach Code Enforcement and Compliance Team is investigating the incident and will determine if the hotel faces fines or penalties, Jamason said.