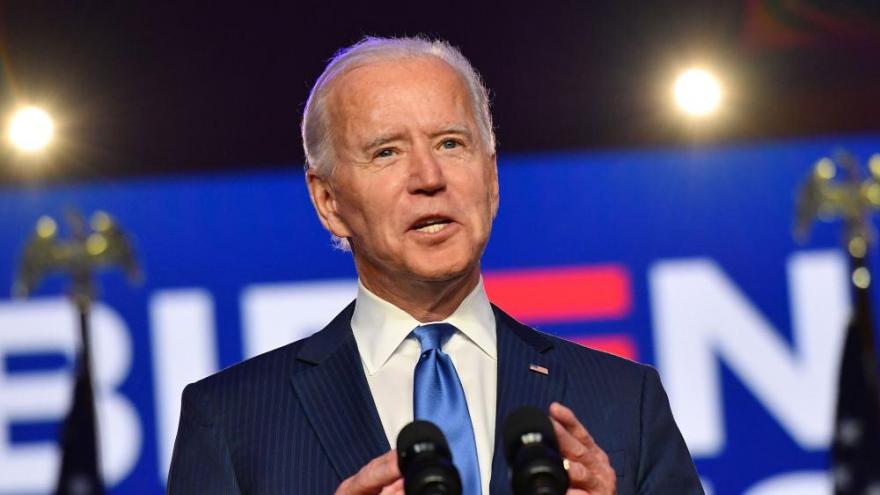 The Trump administration also has yet to sign off on a key document needed to formally begin the transition process.

(CNN) -- President Donald Trump's administration is so far refusing to sign off on a key document needed to formally begin the transition process while he continues to baselessly claim election fraud and refuses to concede the race.

This week, all eyes are on the Trump-appointed General Services Administration administrator, Emily W. Murphy, to recognize Joe Biden as the winner of the election and president-elect. Murphy isn't a household name, but she's the person tasked with officially affirming Biden has won the election on behalf of the Trump administration -- something Trump hasn't done himself.

She needs to sign a letter to release funds to the Biden transition team through a process called ascertainment. This would mark the first formal acknowledgment from the Trump administration that Biden has in fact won the election, but it would also unlock access to national security tools to streamline background checks and additional funds to pay for training and incoming staff.

Yet more than 48 hours after the race was called by numerous news organizations, Murphy has not yet signed off. A GSA spokesperson declined to provide a specific timeline for when ascertainment would take place, a clear signal the agency won't get ahead of the President, who has yet to admit he lost.

"An ascertainment has not yet been made," GSA spokesperson Pamela Pennington told CNN in a statement Monday afternoon.

The statement also inaccurately compared the current situation, in which all of the major news networks who scrutinize vote totals have projected Biden the winner, to Bush v. Gore in the 2000 election where the outcome was in doubt.

"There are no updates at this time and GSA's position remains the same. An ascertainment has not yet been made. GSA and its administrator will continue to abide by, and fulfill, all requirements under the law and adhere to prior precedent established by the Clinton Administration in 2000," Pennington said.

Pennington said in Sunday statement that the General Services Administration doesn't pick who wins the election, but instead "ascertains the apparent successful candidate once a winner is clear based on the process laid out in the Constitution."

She declined to respond to CNN's request for details on the threshold for an "apparent successful candidate."

The delay has set off alarm bells for Biden allies, who are beginning to realize the transition may be more difficult than many inside the President-elect's world assumed, two officials told CNN.

Biden had told his allies over the weekend that he wanted to give Republicans -- and Trump -- a little time to accept the results of the election, according to the officials. They say there is an increasing sense they will have to fight more to preserve the legitimacy of the election outcome and Biden allies may start escalating their rhetoric on this and looking for more people to start making the case on TV and beyond, the officials said.

At the same time, Trump is beginning to come to grips with the reality that he will lose the election, a Trump adviser said, based on conversations inside the campaign and with the President, who now sees a "path to losing." Still, Trump has already begun to discuss with aides the prospect of running in 2024.

Prior administrations from both parties have typically issued the letter within hours of the networks projecting a winner in the presidential race.

A transition expert familiar with the GSA told CNN that it has "always been a quick decision."

Yet President George W. Bush said in a statement Sunday that the November 3 election "was fundamentally fair, its integrity will be upheld, and its outcome is clear." And multiple Republican officials have issued statements calling Biden the "President-elect."

David Barram, who served as the GSA administrator during the Clinton administration, and who ascertained Bush as the winner of the 2000 election, said Monday that this year's election is "dramatically different."

"First off, all these media outlets who call the election have called it for Joe Biden, I think the winner is pretty clear," Barram said on the Transition Lab podcast.

Back in early September, the Trump administration agreed to three documents, memoranda of understanding, with the Biden transition team, as laid out by the Presidential Transition Act. They were signed by the General Services Administration, the Department of Justice, and White House chief of staff Mark Meadows. At the time, $9.62 million was allocated to the Biden transition team for pre-election services, which the team continues to receive.

Once Murphy makes the decision on a successful election winner, that would trigger the release of an additional $9.9 million in funds for post-election services, which includes $6.3 million for the incoming administration, $1 million for appointee orientation and training, and $2.6 million for outgoing services.

Among the items outlined in those MOUs, a transition official told CNN, were an agreement for the Trump administration to provide the Biden transition with office space, communications services, payment or reimbursement for certain activities, staff payroll, travel for the President-elect, expedited security clearance processes for national security nominees, and secure, compartmented national security briefings.

The Office of Director of National Intelligence confirmed in a statement Monday evening that Biden and his senior advisers are not yet receiving the Presidential Daily Brief, as it's known.

"ODNI follows the statutory direction provided in the Presidential Transition Act, which requires ascertainment of the candidate by the administrator of GSA prior to supporting a potential presidential transition," the office said.

"ODNI would not have contact with any transition team until notified by the GSA Administrator."

Murphy was nominated by Trump in 2017 and unanimously confirmed.

Former Obama White House communications director Jen Psaki, who is working with the Biden transition on nominations, called on the GSA to "quickly" ascertain Biden on Sunday.

"Now that the election has been independently called for Joe Biden, we look forward to the GSA Administrator quickly ascertaining Joe Biden and Kamala Harris as the President-elect and Vice President-elect," Psaki tweeted Sunday afternoon.

Psaki added, "America's national security and economic interests depend on the federal government signaling clearly and swiftly that the United States government will respect the will of the American people and engage in a smooth and peaceful transfer of power."

Additionally, the Center for Presidential Transition's advisory board, a nonpartisan group, issued a statement Sunday evening, also calling on the Trump administration to "immediately" ascertain.

In the meantime, there are informal ways to continue the transition process, said Clay Johnson III, who ran George W. Bush's transition in 2000 at a time when the election's outcome was delayed by more than a month over the disputed results in Florida.

"(Dick) Cheney said, 'We can't wait to see who wins this thing, we have to assume we win it. Full speed ahead,' " Johnson recalled, adding that the Bush transition team was unsure if they would get government support and resources and when it would come. Instead, they raised private money and rented their own office space.

"Money to support a privately funded transition is easy to raise. (The Biden team) can raise millions of dollars in half a day," Johnson said.

Trump has made no public indication that he plans to concede or recognize the legitimacy of Biden's victory, and CNN has reported that his campaign is planning a messaging blitz to fuel its argument -- unsupported by any evidence to date -- that the President's second term is being stolen from him through corrupt vote counts in battleground states.

The transition expert observed that Murphy is in a tough position.

"Emily Murphy is a person of high integrity and goodwill. She's an expert. I'm sure she's wondering, 'How the hell did I get here in this position?' " the expert said. "It's her decision under law, it's only her decision."

"The GSA is an administrative agency in charge of procurement and she's a serious person and a person of high integrity," the source added.