Governments are asking residents to wear face coverings in public 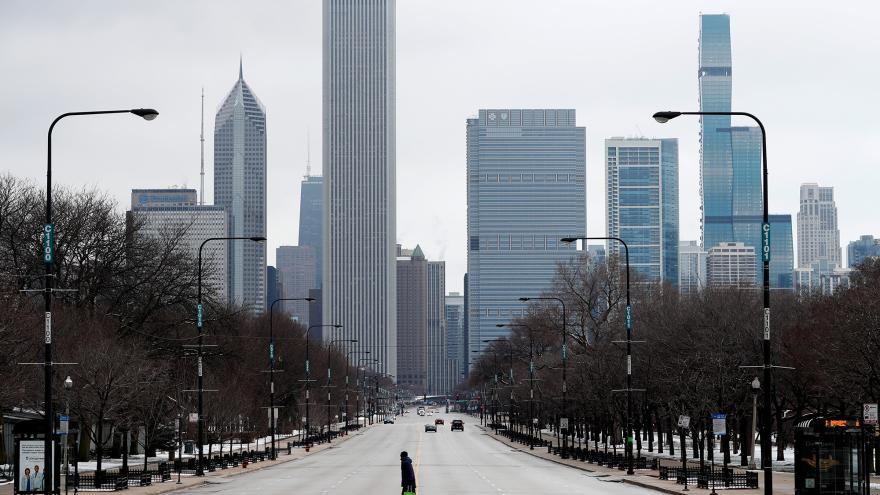 By Nicole Chavez, Jason Hanna and Christina Maxouris, CNN
(CNN) -- After nearly all Americans went under orders to stay at home due to the coronavirus pandemic, some cities are asking people to wear face coverings if they need to go out.

"It could be a scarf. It could be something you create at home, like a bandana," de Blasio said.

Los Angeles Mayor Eric Garcetti made a similar recommendation Wednesday, though he asked people not to wear medical or surgical masks.

In Laredo, Texas, residents will receive fines of up to $1,000 if they don't cover their noses and mouths with "some form of covering" when entering a building open to the public, using public transportation or pumping gas.

A city order that went into effect Thursday says all residents older than 5 should wear face coverings, including homemade masks, scarfs and bandanas.

President Donald Trump said his administration will soon release nationwide recommendations on wearing face masks but a top health adviser on his team has strongly cautioned that masks should not lull Americans into a false sense of security.

"It is not a substitute for the presidential guidelines (on social distancing) that have already gone out," Dr. Deborah Birx, coordinator of the White House coronavirus task force, told reporters. "Don't get a false sense of security that that mask is protecting you exclusively from getting infected."

Local officials are recommending stricter measures to slow down the spread of the virus as the number of cases surpassed 1 million worldwide.

As of Thursday evening, at least 1,011,490 people have been infected globally and 52,863 people have died from the virus, according to Johns Hopkins University statistics. The total includes confirmed cases from 180 countries and regions.

In the United States -- now the country hardest-hit by the pandemic -- the virus has already infected more than 242,000 people from coast to coast.

'It's within our power to modify those numbers'

Dr. Anthony Fauci, the top US infectious disease expert, said Thursday the country can still defy alarming projections of coronavirus deaths with aggressive measures -- even as scientists warn the White House that simply exhaling may be enough to spread the virus.

Models had showed that the US death toll could be at least 100,000 with aggressive social distancing, White House experts said earlier, and as high as 2.2 million without them.

But, "it's within our power to modify those numbers," Fauci, director of the National Institute of Allergy and Infectious Diseases, told "CBS This Morning" on Thursday.

"If you really push hard on mitigation ... you can modify the model," Fauci said. "We need to push and push with the mitigation to try and get that number lower than the projected number."

As of Thursday evening, at least 242,095 people in the United States have been infected and at least 5,831 have died, according to Johns Hopkins University statistics. More than 920 of those deaths were reported Wednesday -- the highest number reported in the country since the beginning of the outbreak.

Fauci's comments come after a prestigious scientific panel told the White House on Wednesday night that coronavirus can be spread not just by sneezes and coughs, but also by talking or maybe even just breathing.

"While the current (coronavirus) specific research is limited, the results of available studies are consistent with aerosolization of virus from normal breathing," according to a letter written by Dr. Harvey Fineberg, chairman of a committee with the National Academy of Sciences.

With the US Centers for Disease Control and Prevention estimating 25% of coronavirus carriers have no symptoms, health officials such as Fauci have said they're considering whether to recommend the general public wear non-hospital-grade masks to prevent the virus's spread.

• Louisiana's coronavirus cases jumped by more than 2,700 in 24 hours, bringing its total to more than 9,000, the state health department said Thursday.

• The US Food and Drug Administration has authorized a coronavirus test that looks for antibodies in the blood. The FDA says it is reasonable that it "may be effective in diagnosing Covid-19." The CDC also has said it is trying to develop a similar antibody test to identify people who had been previously infected but showed little or no symptoms.

• More than 2,000 ventilators in the federal stockpile are unavailable for deployment because they weren't maintained while in storage, according to The New York Times.

• More than 110 sailors from USS Theodore Roosevelt, now at port in Guam, have tested positive for coronavirus, according to a US defense official. Some of the sailors from the Roosevelt will be quarantined in hotel rooms in Guam.

Doctors and nurses across the country have spoken out about the difficulty of helping an increasing number of Covid-19 patients with dwindling amounts of protective equipment, ventilators and beds.

A third-year resident there said she goes to work feeling "like a sheep going to slaughter."

"My colleagues and I are writing our last will and testament. I'm 28 years old," Dr. Laura Ucik said.

Thursday, New York Gov. Andrew Cuomo estimated that his state had "about six days" before its stockpile of ventilators, which he is sending to hospitals in need, runs out.

A day earlier, he cited a model that showed as many as 16,000 New Yorkers could die from the virus.

New York, now the epicenter of the outbreak, has reported more than 92,000 cases and 2,317 deaths. More than 51,000 of those infections have been in New York City, Cuomo said Thursday.

Emergency medical services received a record number of emergencies each day, with a 50% increase over normal daily call volume, the New York City Fire Department said in a news release.

'What are you waiting for?' California governor says to states without stay-at-home orders

Nearly 92% of the US population lives in jurisdictions with general "stay-at-home" or "shelter-in-place" orders. Most governors issued them statewide, and many counties and cities have issued orders where statewide orders aren't in place.

California Gov. Gavin Newsom, who in March became the first governor to issue a statewide order, argued that every state needed one.

"What are you waiting for? What more evidence do you need?" he said Wednesday "If you think it's not going to happen to you, there are proof points all over the United States, all over the world."

President Donald Trump said Wednesday he would not issue a national stay-at-home order because different states have different infection rates.

"You have to look -- you have to give a little flexibility. If you have a state in the Midwest, or if Alaska for example doesn't have a problem, it's awfully tough to say close it down. We have to have a little bit of flexibility," he said.

Some new data from researchers in Wuhan, China, suggests the malaria drug hydroxychloroquine could significantly shorten the time it takes for Covid-19 patients to recover from illness.

In this early research, posted to the online health sciences server medRxiv on Tuesday, the researchers wrote that "the body temperature recovery time and the cough remission time were significantly shortened" among patients treated with hydroxychloroquine compared with a control group not treated with the drug.

The research has limitations, including that it was conducted in a very small group of patients with mild illness and has not been published yet in a peer-reviewed journal.

The FDA has yet to approve a treatment for Covid-19. However, this week it granted emergency authorization for doctors to use hydroxychloroquine and chloroquine to treat hospitalized patients for a limited set of cases, and clinical trials are pending.

But, she cautioned, "we're not sure this can be generalized to all patients," she said.

"They gave it to people who didn't have (other chronic conditions), like cardiovascular comorbidity and liver disease and renal disease," Walensky said.

CORRECTION: This story has been updated to give the correct estimate for how many Americans live in states where they've been ordered to stay at home.