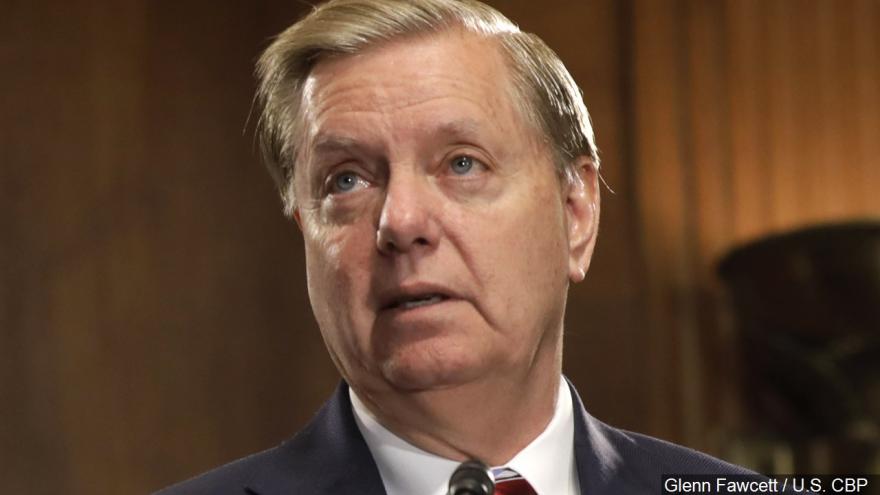 (CNN) -- Iran's decision to launch more than a dozen missiles at two Iraqi bases that hold US troops sparked immediate but mixed congressional reaction, with one of President Donald Trump's top Senate allies calling the attack an "act of war" and some other lawmakers urging restraint.

"The missiles were launched from Iran at targets inside of Iraq housing US military personnel. The President has all the authority he needs under Article II (of the Constitution) to respond, and how he responds is yet to be determined, but he has that authority to respond," Sen. Lindsey Graham, a South Carolina Republican who is considered hawkish on foreign policy, said on Fox News Tuesday night. "It was an act of war by a regime that for the last 40 years has been a cancer in the Mideast."

Graham later added: "Let me say tonight, if you are watching television in Iran, I just got off the phone to the President: Your fate is in your own hands in terms of the regime's economic viability. You continue this crap, you're going to wake up one day out of the oil business."

"The time will come to debate U.S. policy. Tonight American & allied troops have come under direct attack by a nation-state & Americans must come together to support & protect them & respond appropriately," Rubio tweeted.

Iran has said the attack was "hard revenge" for the American airstrike that killed Iranian commander Qasem Soleimani last week. An initial assessment is the Iranian missiles struck areas of the al-Asad base that are not populated by Americans, according to a US military official and a senior administration official, though a full assessment is underway.

Trump could offer additional information when he addresses the nation Wednesday morning. Some Senate Democrats, led by Minority Leader Chuck Schumer, are calling on Defense Secretary Mark Esper and Chairman of the Joint Chiefs of Staff Mark Milley to provide regular briefings and documents to Congress about troop deployments related to how the US is responding to the escalating tensions.

"We write to express our deep concern over the lack of information from the Department of Defense as it concerns the potential threat from Iran and what the Department is doing in response," the senators wrote.

Several notable lawmakers urged restraint in the immediate wake of the attack while expressing concern for US service members.

"We are at a critical juncture where we still have an opportunity to be responsible and pursue diplomatic channels; our nation has friends and allies who will stand with us. The American people are not interested in getting involved in yet another endless war in the Middle East with no clear goal or strategy," he said in a news release.

"Now is the time to shore up our alliances. We must focus on protecting Americans, our assets, our allies and those innocent civilians who bear the burden of conflict."

Menendez's comments were echoed by House Speaker Nancy Pelosi, a California Democrat, who tweeted Tuesday, "We must ensure the safety of our service members, including ending needless provocations from the Administration and demanding that Iran cease its violence. America & world cannot afford war."

Sen. Amy Klobuchar, a Minnesota Democrat running for president, said it was "vital that we take this moment to consider any response" and that "a full-blown war with Iran is not in the national security interest of the U.S. or allies in the region."

And Sen. Rand Paul of Kentucky, a Republican who has been critical of the escalating tensions with Iran, tweeted Tuesday that "while I would have preferred they come home long ago, there is also no excuse for this action by Iran."

"We need to stop the escalation before it leads to another endless war in the Middle East," he said.