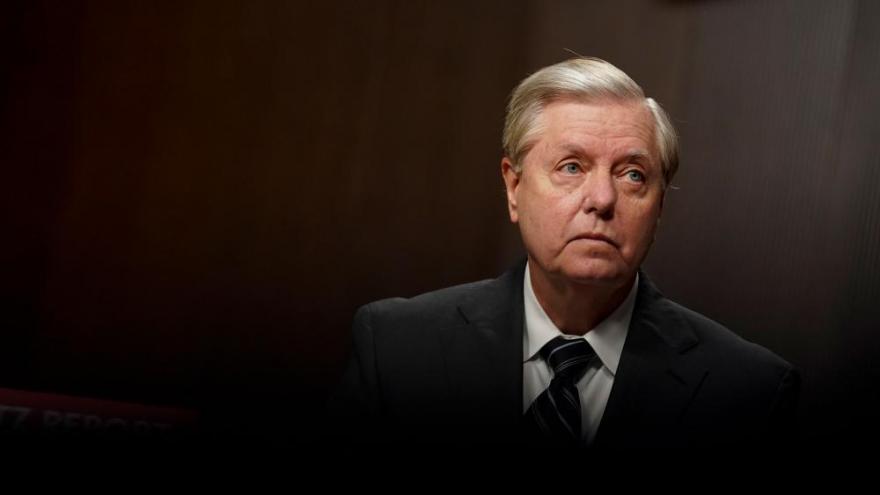 Republican Sen. Lindsey Graham of South Carolina acknowledged on Tuesday that his efforts to probe state officials went beyond Georgia into two other states where Democratic President-elect Joe Biden also won. In this image, Graham attends a hearing on September 30 on Capitol Hill in Washington, DC.

(CNN) -- Republican Sen. Lindsey Graham of South Carolina acknowledged on Tuesday that his efforts to probe state officials went beyond Georgia into two other states where Democratic President-elect Joe Biden also won, while President Donald Trump sought to discredit the result of the election.

Graham, a top Trump ally, defended his outreach to officials in Arizona, Nevada and Georgia as an attempt to learn how these states validate signatures on mail-in ballots, arguing it was part of his effort to determine whether any changes needed to be made. But the senator revealed to CNN that he had privately pushed Georgia Secretary of State Brad Raffensperger for tougher mail-in voting rules in the Peach State ahead of two crucial runoff elections on January 5 that will determine the next Senate majority.

"If we're going to expand voting by mail, which we probably will, I want to make sure that we're taking the precautions necessary to validate signatures like we do if you show up on Election Day," Graham told CNN.

Graham, the chairman of the Senate Judiciary Committee, has no oversight over election matters, which falls under the jurisdiction of the Senate Rules Committee, and has faced a barrage of criticism for his interventions in the democratic process.

Asked why it was appropriate for him to probe state officials who are responsible for setting their own rules, Graham said he was well within his rights to do so, and defended his call to Raffensperger on Friday.

"What I'm very concerned about is that if you're going to continue to vote by mail that we need to know what systems work and what don't," Graham said. "It's up to the people of Georgia. I think I have every right in the world to reach out and say how does it work? And that's what I did."

But Raffensperger, a Republican, has argued that Graham sought to get him to discard legally cast ballots that came by mail as the state conducts a hand recount of the presidential race, a stunning allegation that Graham denied.

Raffensperger said on CNN's "The Situation Room" on Monday that Graham had hinted that he should try to discard some ballots in Georgia.

"He asked if the ballots could be matched back to the voters," said Raffensperger. "I got the sense it implied that then you could throw those out for any, if you look at the counties with the highest frequent error of signatures. So that's the impression that I got."

"It was just an implication of, 'Look hard and see how many ballots you could throw out,'" Raffensperger added.

Georgia election implementation manager Gabriel Sterling, who works for Raffensperger, told CNN on Tuesday that he had participated in the call with Graham. Sterling said he had heard the senator ask if state officials could throw out all of the absentee ballots where a "percentage" of signatures did not "truly" match.

Graham's comments "might have gone a little to the edge of" what people deem acceptable, said Sterling. But he added that he understood why Raffensperger and Graham interpreted the conversation differently.

Senate Majority Leader Mitch McConnell declined to comment on Graham's actions on Tuesday, but maintained that state rather than federal officials should handle voting issues.

"What I've emphasized is that one of the beauties of the American election system is we have 50 separate ways to conduct them," McConnell said. "Every state is different. It ought to stay that way."