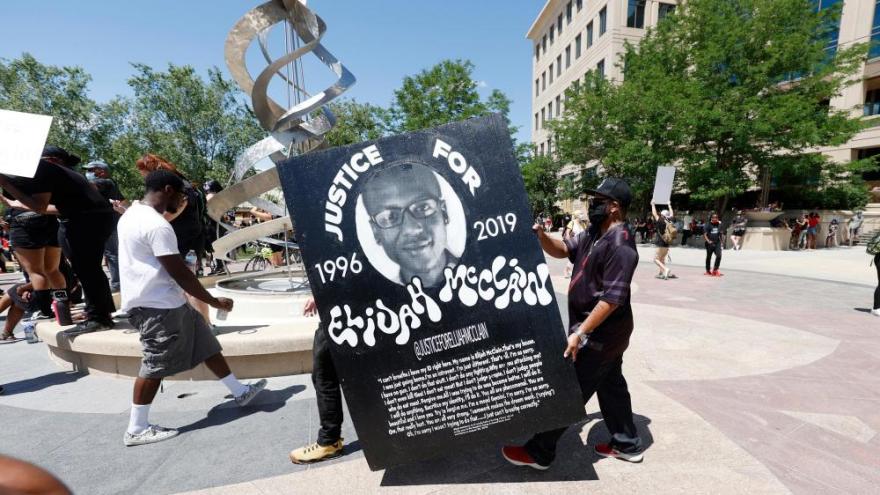 A photo of Elijah McClain who died in a hospital after an August 24 incident involving Aurora police.

(CNN) -- A Colorado grand jury indicted three police officers and two paramedics involved in the August 2019 death of Elijah McClain, a 23-year-old Black man who was stopped by police while walking home from a store, placed in a carotid hold and then injected with ketamine, Colorado Attorney General Phil Weiser announced Wednesday.

"We're here today because Elijah McClain is not here and he should be," Weiser said. "When he died he was only 23 years old. He had his whole life ahead of him and his family and his friends must now go on and must live without him."

The grand jury returned the results of the investigation on Thursday, nearly two years since McClain's death.

The indictment is in sharp contrast to prosecutors' initial conclusions in the case. In 2019, Adams County District Attorney Dave Young declined to bring criminal charges because he said prosecutors lacked evidence to prove the officers caused McClain's death or that their force was unjustified.

But McClain's story gained renewed attention last June after the police killings of George Floyd and Breonna Taylor and the rise of the Black Lives Matter movement. Spurred by protests in Aurora and a viral online petition, Gov. Jared Polis announced a re-examination of the case last year. Weiser was appointed as special prosecutor and opened a grand jury investigation into the case in January.

In general, police officers rarely face criminal charges for the in-custody deaths of Black people, and convictions in such cases are even rarer. In his news conference Wednesday, Weiser acknowledged the challenge ahead for prosecutors.

"Make no mistake, we recognize that this case will be difficult to prosecute. These types of cases always are," he said. "Our goal is to seek justice for Elijah McClain, for his family and friends and for our state. In so doing, we advance the rule of law and our commitment that everyone is accountable and equal under the law."

McClain's mother, Sheneen McClain, told CNN in a phone interview that she was excited by the news of the indictments and thanked Weiser, his team and the grand jury.

"I started crying because it's been two years," she said. "It's been a long journey, you know, and it's overwhelming. I'm still processing it, you know, because this is one of those things that has never really been done and is being done right here because of my son, so it's overwhelming."

McClain's father, LaWayne Mosely, wept tears of joy at the news, according to a statement from his attorney.

"Nothing will bring back my son, but I am thankful that his killers will finally be held accountable," Mosely said in the statement.

The Aurora Police Department, Aurora Fire Rescue and the defendants did not immediately respond to a request for comment.

Aurora Police Chief Vanessa Wilson and Fire Rescue Chief Fernando Gray both offered their condolences to the McClain family and said they will cooperate with the judicial process.

A civil investigation into the APD and AFD patterns and practices of civil rights violations is ongoing, Weiser said.

McClain stopped while walking home from a store

McClain's final moments have previously been described in the form of police body-camera footage and a 157-page independent investigative report funded by the Aurora City Council.

Like those documents, the 24-page indictment details the events of August 24, 2019, when officers received a call about a person wearing a ski mask. The officers confronted McClain, a massage therapist, musician and animal lover, who was walking home from a convenience store carrying a plastic bag of iced teas.

The officers tried to physically restrain him, leading to a struggle, the indictment states.

"I'm an introvert," McClain said in video recorded by body-worn cameras after officers confronted him. "Please respect the boundaries that I am speaking."

"Relax," an officer said at one point, "or I'm going to have to change this situation."

McClain, who had earbuds in his ears, told the officers he was trying to stop his music so that he could listen to them. During the struggle, one officer said, "He just grabbed your gun, dude." One officer told McClain that he will "bring my dog out and he's going to bite you" if McClain kept "messing around."

During the struggle, officers twice placed McClain in a carotid control hold, in which an officer uses their biceps and forearm to cut off blood flow to a subject's brain, the indictment says. McClain briefly lost consciousness, the indictment states, but continued to struggle with officers after waking up.

They also put him in handcuffs and held him on the ground despite repeated pleas that he could not breathe, the document states.

Cooper and Cichuniec, Aurora Fire paramedics, then arrived at the scene and diagnosed McClain with "excited delirium," a controversial diagnosis that describes violent agitation. Neither paramedic checked his vital signs, talked to McClain or touched him before making the diagnosis, the indictment states.

They then injected McClain with a dose of the sedative drug ketamine based on an estimate that he was 200 pounds; he in fact weighed 143 pounds, according to the indictment.

"By the time he was placed on the gurney, Mr. McClain appeared unconscious, had no muscle tone, was limp, and had visible vomit coming from his nose and mouth," the indictment says. "(Officer) Roedema said he heard Mr. McClain snoring, which can be a sign of a ketamine overdose."

The paramedics found he had no pulse and was not breathing and performed CPR. He never regained consciousness and was declared brain-dead on August 27, the indictment states. His life support was then removed and he became an organ donor.

Indictment differs on cause of death

The indictment differs most clearly from prior documents in regards to the officers' and paramedics' actions as having possibly caused his death.

An initial autopsy conducted by the county coroner did not determine the cause of death but noted "intense physical exertion and a narrow left coronary artery" were contributing factors. The coroner found the amount of ketamine in his system to be a therapeutic amount.

There was no official determination as to how McClain died -- a point the District Attorney noted in his explanation of why he decided not to prosecute. "I cannot take a case to the jury where I don't know what the cause of death is on a homicide case," Dave Young told CNN last year.

However, the indictment notes the officers' physical restraints and the paramedics' ketamine administration, and cites a clear cause of death.

"Mr. McClain was a normal healthy 23-year-old man prior to encountering law enforcement and medical response personnel," the indictment states.

"A forensic pathologist opined that the cause of death for Mr. McClain was complications following acute ketamine administration during violent subdual and restraint by law enforcement and emergency response personnel, and the manner of death was homicide."