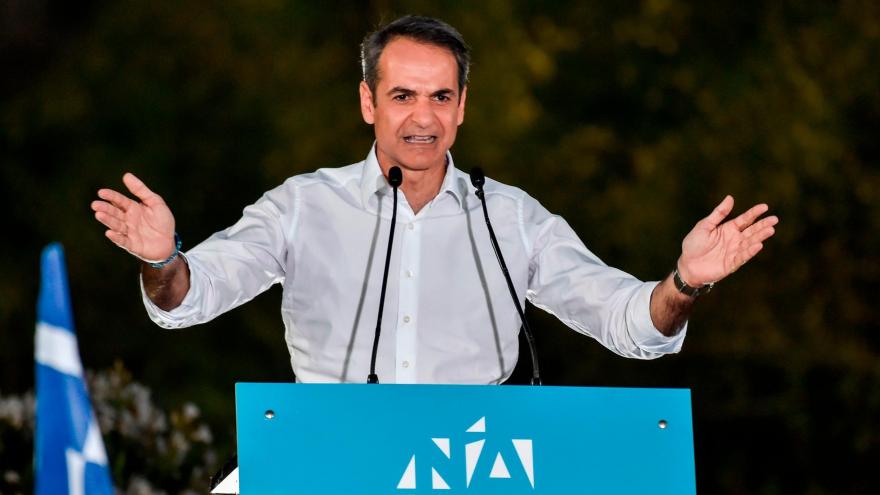 (CNN) -- With 75% of the vote counted, the center-right New Democracy party was on track to win the first national elections since Greece exited a bailout regime a year ago, signaling a clean break with years of firebrand populism and a return to mainstream politics.

Initial results give New Democracy 39.6% of the vote, a strong mandate in a country governed for a decade by fragile coalitions.

Prime Minister Alexis Tsipras conceded defeat in a live TV broadcast, saying, "The result has been determined ... but we will be back."

Kyriakos Mitsotakis of New Democracy thanked the Greek people in a victory speech, saying, "I know the difficulties lying ahead. ... I don't request a grace period because we don't have time for it." He added, "Transparency and meritocracy will return to Greece and our country's voice will be heard in Europe."

The results suggest a complete reversal of fortunes in Greece, with a return to a party that has been a pillar of Greece's pre-bailout establishment. Initial projections for the ruling Syriza, Coalition of the Radical Left party, give it 31.6% of the vote. In May, Syriza called a snap election after suffering a major blow in European Parliament elections.

Mitsotakis is the scion of a Greek political dynasty whose father also served as leader under the same party.

After studying at Harvard and Stanford, Mitsotakis worked in the banking sector before launching his political career, which saw him serve as minister of administrative reform between 2013 and 2015.

A liberal reformist, Mitsotakis promises to rebrand the country and change its image as Europe's problem child in the wake of an eight-year depression that saw its economy slashed by 25% -- the worst contraction in a developed economy since the end of World War II.

Mitsotakis says his priority is to reignite the economy by slashing taxes and regulations, while attracting investment.

Greece's economic recovery is underway, although still weak and only forecast to grow by about 2% annually for the next three years. Mitsotakis' plan is to implement rapid changes, such as privatization, and transform Greece into a more business-friendly country.

He will then go to the country's lenders in a bid to negotiate a new deal. "I believe I can negotiate with the Europeans more fiscal space and the markets are showing that they are quite excited about us coming into power," he has said. Much of his success depends on clinching this deal.

But for all his reform plans, Mitsotakis comes from the same political establishment that plunged Greece into the crisis in the first place, and which voters rejected in 2015. The vote for the markets-friendly old guard is equally a protest vote against a government that over-promised and failed to deliver; a message to populists worldwide that things can change and then change back.

In hindsight, Mitsotakis' strategy now feels like a winning recipe to Greeks.

In January 2015, after two bailout programs and years of cuts and violent protests, Greece sailed into uncharted waters, rejecting old-style politics and a tough belt-tightening course under the then center-right New Democracy government.

People voted for radical change promised by Syriza and its leader Tsipras, a charismatic speaker. The little-known party was elected on an anti-bailout platform promising to confront the country's lenders and put an end to austerity, but without much success.

Greece's populism odyssey resulted in bank runs and talk of Grexit, the country's exit from Europe's monetary union. Negotiations went to the brink. Banks shut for days and capital controls were imposed.

At the last minute, facing chaos after a referendum that could have led Greece out of the EU, Syriza made a U-turn and signed a third bailout agreement followed by a snap election. A tamer second Syriza government was re-elected in September 2015, bringing in further austerity and tax hikes in order to meet fiscal targets.

The events of summer 2015 signified for many Greeks the end to the illusion that it would be possible to resist change. Like Tsipras then, Greeks are now making a U-turn.

"Greece already has first-hand experience of economic populism and is now rejecting it, making a turn towards pragmatism," says George Pagoulatos, a professor at the Athens University of Economics. "The vote in 2015 was one of hope, of desperation. Then the idealism collapsed. Now people are focusing on who they believe can deliver."

In other parts of Europe that watched Greece's downfall from what may have seemed like a safe distance, the legacy of the "Greek tragedy" continues to serve as a rallying cry for Brexiteers and a cautionary tale for right-wing populists. It has also exposed some of the deepest rifts in the European Union, with far-right nationalists making big gains in May's European Parliament elections.

In Greece itself, support for extremism is declining. Greece was one of the first European countries to bring an extreme right, anti-migrant party into parliament in 2012. Support for the Golden Dawn party was fueled by desperate economic conditions and a refugee crisis that in 2015-2016 saw around 1 million refugees enter Europe through Greece's shores.

Election results show a big drop for Golden Dawn, and although nationalism has played a determining role in this election, it has carried a softer tone. Tsipras nevertheless ignited strong national sentiment within Greece and bore a heavy political cost for his hugely unpopular decision to ratify an accord to end a decades-long name dispute with its neighbor, the newly renamed Republic of North Macedonia.

Nepotism, corruption scandals, and accusations of interference in the justice system have also taken their their toll. And Tsipras' anticipated moment of glory, when Greece exited its final bailout program in summer 2018, was drastically overshadowed by the deadly wildfires which left over a hundred people dead in Greater Athens. Instead of planned fireworks, Tsipras was left to deal with a huge public outcry over his handling of the tragedy.

Populism coming to an end?

Greece was the first country in the last decade to bring grand scale populism to the mainstream European arena. Now it is the first to firmly reject it, in an election result that may signal the beginning of the end for extreme populism in Europe.

"Greece's first-hand experience of populism and the extreme right has enabled the country to exit from the biggest crisis in the eurozone with greater maturity," says Nick Malkoutzis, the political editor of MacroPolis. "It feels like a cycle is ending and the country is returning to political normality."

What Greeks crave more than anything after so many years of living in constant crisis is stability, he adds.

In Greece's new age of pragmatism, Mitsotakis personifies the country's proactive, comprehensive reform plan that will lead the country out of the economic labyrinth. He will be judged, however, by a country no longer easily wooed by empty promises.