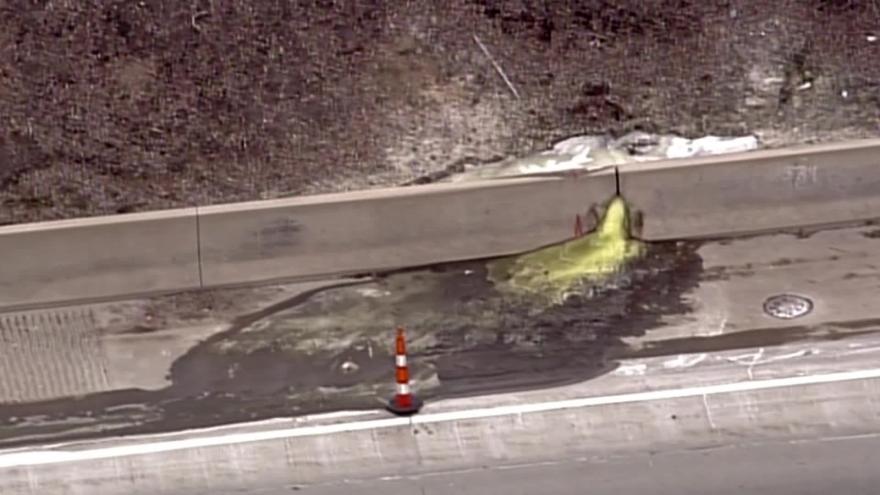 (CNN) -- A green liquid was found oozing onto Interstate 696 in the Detroit suburb of Madison Heights Friday, causing authorities to block off portions of the highway and call in federal agencies to investigate.

By Saturday, it was discovered that the mysterious liquid was the chemical hexavalent chromium and was leaking from a local business, Michigan State Police said on Twitter.

Hexavalent chromium is usually produced during industrial processes like plating and is known to cause cancer, according to the Occupational Safety and Health Administration. The chemical is harmful to the respiratory system, kidneys, liver, skin and eyes.

The chemical was leaking from the basement of the local business, down into the ground and went into a drain that emptied out onto eastbound I-696, police tweeted. Had the liquid not been discovered, it could have ended up in Lake St. Clair, said Candice Miller, Macomb County public works commissioner.

"The Environmental Protection Agency (EPA) indicated that once the chemical came up thru the drain, it froze into a yellow blob," police tweeted. "The plan to dispose of the chemical is to bring in a type of excavator, scoop up the frozen waste, and place it into a safe container."

"We have cleaned out the sewers and the clean out drains between the facility and 696," said Jill Greenberg, a spokeswoman for the Michigan Department of Environment, Great Lakes and Energy. "We're also in the process of cleaning up the basement of the facility."

Tricia Edwards with the EPA said the cleanup is going to take time because there is a lot of clay in the area, and the substance was traveling onto the clay.

Hexavalent chromium, also known as chromium-6, is the chemical that was featured in the popular 2000 movie "Erin Brockovich," starring Julia Roberts as the activist who helped sue a California utility over the chemical leaching into water.