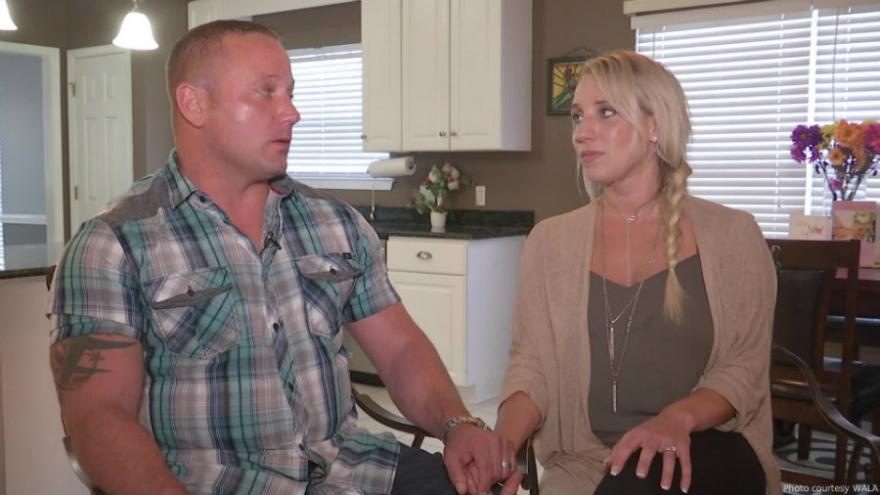 While taking wedding pictures, the groom ran out into the Gulf to save a drowning swimmer.

"We planned it in a week," said Cindy Edwards, the bride.

These weren't your average nuptials. Just after the ceremony while taking pictures, things got scary.

"A lady had come up to us and said that guy is out there struggling. He can't get back, he's having a hard time," she said.

Remembering her new husband is a former lifeguard and a coast guardsman, Cindy told him he had to go.

"She said don't worry about your pants, just go. See you've got to listen to your wife because otherwise, you're in trouble," said Zac Edwards, the groom.

There were red flags up but some people didn't heed the warning. First responders on duty were away saving someone else. So Zac swam out into the gulf.

"And he goes to start taking his shirt off and he went off to take off his bottoms and I was like 'you don't have time' the guy kept drifting further and further out and he was struggling," she said.

For a moment, they say, Edwards and the young man were stuck.

"It's scary. You don't wanna lose a loved one, unfortunately, living here, we hear about it way too often. Just be mindful of those flags and knowing to be cautious," Cindy added.

First responders showed up shortly after and brought them both to safety. Zac says all he could think about was his bride.

"It beat us up pretty hard getting in and we pulled up on the beach everybody grabs him. I got up and she's running out in her wedding dress. I'm bleeding from the nose and trying to tell her get away because I know how important that dress was and I didn't want to ruin that," he said.

It's an unusual wedding story, you can certainly tell that by the pictures, a day they wouldn't trade for the world.

In fact, the new Mrs. Edwards says she got a package deal.

"Hero and hubby in the same day," she said.

The Edwards say they spoke to the family of the young man from Mississippi. He's doing fine, a little sore but back to work and started his first day of senior year today.