Growing fires in US West put damper on holiday festivities 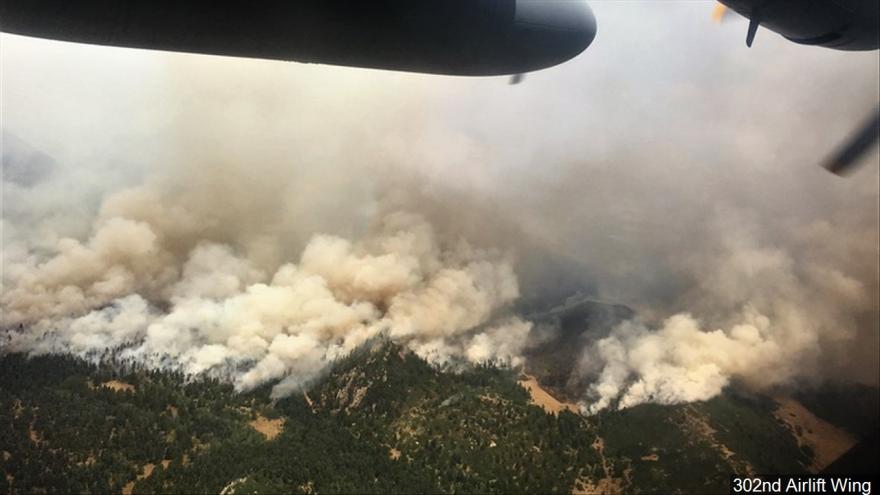 DENVER (AP) — Large wildfires grew across the American West on Wednesday, keeping thousands of people out of their homes for the July 4 holiday and forcing some strict bans on fireworks to prevent new fires from igniting in the hot, dry region.

The National Interagency Fire Center on Wednesday reported more than 60 large, active blazes across the country, most in the drought-stricken West where holiday festivities could lead to increased fire danger.

The Spring Fire has destroyed more than 100 homes, and over 2,000 have been evacuated. Officials said preventing the flames from spreading toward the small mountain town of Cuchara is a priority.

Nearly 1,000 firefighters were working to gain control of the fire in unpredictable winds, but it was only slightly contained since sparking June 27.

"We're holding our own," Shane Greer, an incident commander with the Rocky Mountain Incident Management Team told residents. "There's some good firefighting going on out there."

In Eagle County, authorities urged residents in a mobile home park to evacuate Wednesday night after the Lake Christine quickly grew in size due to erratic winds.

Elsewhere, on the holiday, fireworks displays were scheduled to go on in Denver and other large cities, but several mountain communities called off their festivities to avoid any risk of flames.

In the southwestern mountain town of Silverton, a fireworks display was canceled in favor of live music and a parade. Aspen officials planned a fire-proof display using drone lights in place of fireworks.

Parts of Colorado and other Western states have been grappling with severe drought that's made wildfires explosive so far this season.

It wasn't clear how many more people were told to flee, but several hundred homes and cabins have been evacuated and the orders were extended to a 20-mile (32-kilometer) area dotted with trees and cabins.

The growing fire forced authorities to shut down high-tension power lines in the area Wednesday evening.

The fire roughly two hours southeast of Salt Lake City has destroyed about 30 structures. Officials in Utah closed a portion of Strawberry Reservoir so planes could scoop water and drop it onto the flames, but people could still boat and fish on other parts of the water Wednesday.

On Wednesday afternoon, authorities also ordered evacuations of a campground and nearby subdivisions after flames moved closer to the reservoir.

Darren Lewis and his extended family planned to spend the Fourth of July at a cabin built nearly 50 years ago by his father and uncle. Instead, Lewis and his family would have to spend the holiday nervously waiting to hear if a half-century of family memories go up in smoke.

"There's a lot of history and memories that go into this cabin," said Lewis, 44, of Magna, Utah. "The cabin we could rebuild, but the trees that we love would be gone. We're just hoping that the wind blows the other way."

Officials believe the fire was human-caused, but they are still investigating how it started Sunday.

In Northern California, officials reported some progress against a wildfire threatening hundreds of buildings but cautioned that wind and dry conditions could keep fueling the flames.

Weather could help Wednesday, which was expected to be the coolest day of the week, fire spokesman Israel Pinzon said. Temperatures were forecast to be 10 to 15 degrees lower than the triple digits that firefighters have faced.

Roughly 2,500 people had been forced from their homes. Pinzon said officials lifted some mandatory evacuations Tuesday night, though he didn't know how many people were allowed to return home.

No structures have been damaged or destroyed.