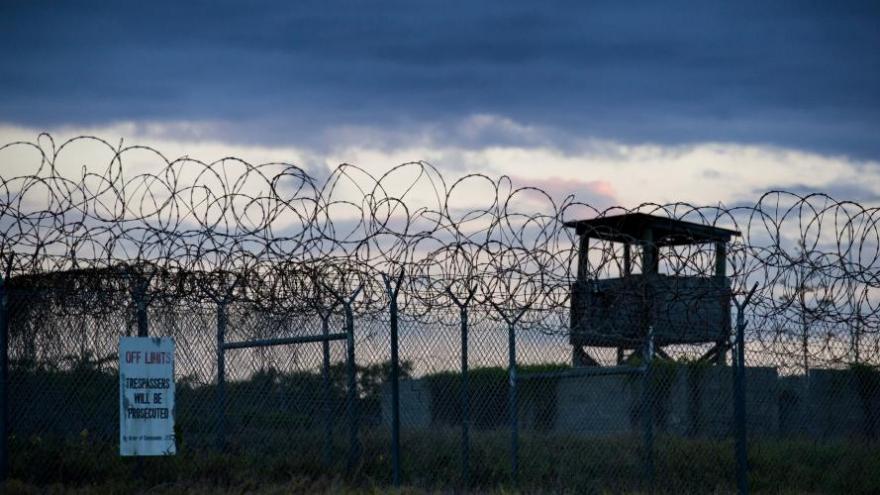 In this photo reviewed by US military officials, the sun sets behind the closed Camp X-Ray detention facility, on April 17, 2019, in Guantanamo Bay Naval Base, Cuba.

(CNN) -- A Saudi detainee at the detention facility in Guantanamo Bay, Cuba, was sent back to his home country for mental health treatment after being detained by the US government for more than 20 years, the Defense Department announced Monday.

Authorities once alleged that the detainee, Mohammed al-Qahtani, was an al Qaeda operative who had planned to be the "20th hijacker" on 9/11 but failed to board United Airlines Flight 93, which crashed in rural Pennsylvania.

Al-Qahtani was captured near the border of Afghanistan in December 2001 and was transferred to the Guantanamo Bay detention facility in February 2002. After his capture, al-Qahtani was imprisoned, tortured by the US government and -- when charges against him were dropped in 2008 -- left to languish behind bars.

But in February, the Periodic Review Board -- a government entity established during the Obama administration to determine whether detainees at the facility were guilty -- recommended repatriating al-Qahtani to a mental health facility in Saudi Arabia. The board "determined that continued law of war detention of the detainee is no longer necessary to protect against a continuing significant threat to the security of the United States," according to public documents.

"The United States appreciates the willingness of Saudi Arabia and other partners to support ongoing U.S. efforts toward a deliberate and thorough process focused on responsibly reducing the detainee population and ultimately closing of the Guantanamo Bay facility," the Defense Department said in a statement Monday.

CNN previously reported that al-Qahtani's lawyers had said he is severely mentally ill, battling schizophrenia, depression and post-traumatic stress disorder as a result of his torture.

While his lawyer, Ramzi Kassem, who has been representing al-Qahtani for over a decade, does not believe al-Qahtani's repatriation means that "justice was done," he is glad his client will be able to receive the care he needs back in Saudi Arabia, Kassem said in a statement. Kassem is a law professor at the City University of New York and has represented al-Qahtani in collaboration with the Center for Constitutional Rights.

"It would not be right to say that justice was done with Mohammed's repatriation because nothing can make up for the torture of a sick man and his incarceration without trial over two decades," Kassem said. "For Mohammed, this is about survival. The end of his long nightmare at Guantanamo means that he finally has a chance to receive the medical attention he desperately needs in Saudi Arabia, with the support of his loving family."

Biden has said publicly that he wants to close the detention facility, and the National Security Council is undergoing a review of the facility.