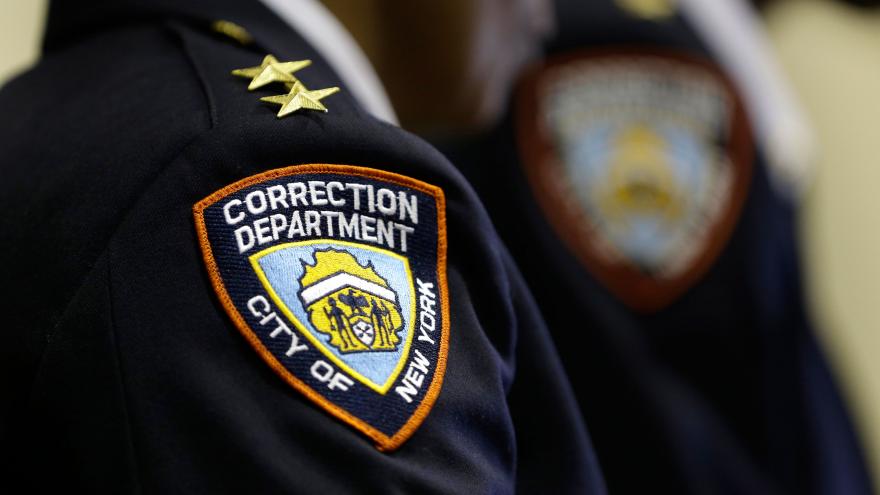 In this March 12, 2015, photo corrections officers listen to a news conference in an enhanced supervision housing unit on Rikers Island in New York.

Correction Commissioner Cynthia Brann said in a statement to CNN that her department is investigating and she referred the incident, which happened November 28, to the city's Department of Investigation which is conducting an independent inquiry.

Brann was responding to a report that at least five corrections officers did not act for seven minutes while the inmate tried to hang himself, according to the New York Times, which cited four people with knowledge of the matter.

Some of the corrections officers watched the suicide attempt, according to the New York Times.

The inmate was hospitalized and put in a medically induced coma on Tuesday, the Times reported.

The incident was captured on video that officers are supposed to periodically monitor, the Times reported, according to four people who spoke to the newspaper on the condition of anonymity because they were not authorized to speak about the matter publicly.

"The claims being made here are extremely troubling and we are taking them seriously. The safety and wellbeing of those in our custody is our number one priority and an investigation into this incident is underway," Brann said about the Times report, adding "if the outcome of the investigation warrants we will take appropriate disciplinary action up to and including termination."

The Department of Correction told CNN it could not release the inmate's name, citing privacy rules.

CNN has also reached out to the Department of Investigation and the Bronx District Attorney's Office for comment.