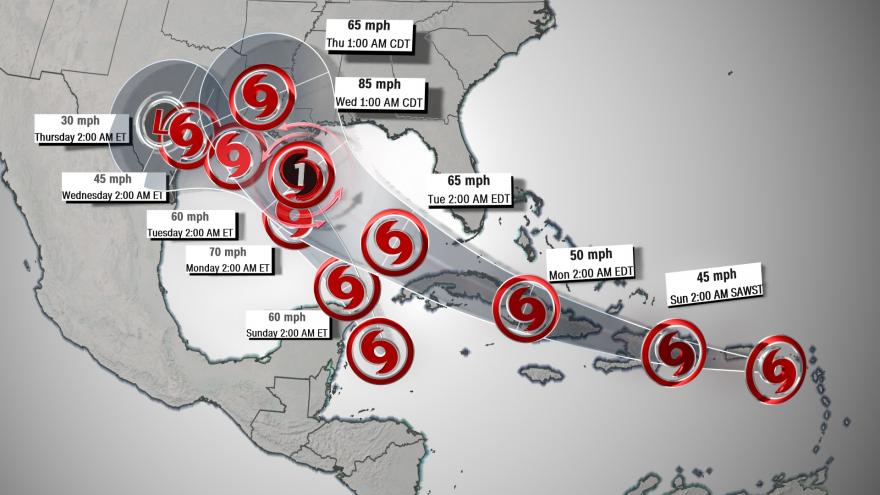 (CNN) -- Tropical Storm Marco strengthened significantly on Saturday and could hit Louisiana as a hurricane by Monday, according to the latest National Hurricane Center forecast.

Marco, which could reach hurricane status as soon as Saturday night, is one of two tropical systems expected to impact the Gulf Coast in the coming days.

The storm marched past the Yucatan Peninsula earlier on Saturday and is moving north into the Gulf of Mexico, according to the hurricane center.

A hurricane watch has been issued from Intracoastal City, Louisiana, to the Mississippi-Alabama border, including Lake Pontchartrain and New Orleans. Much of the Alabama coast is under a tropical storm watch.

Meanwhile, Tropical Storm Laura is moving away from western Puerto Rico and is expected to move over the island of Hispaniola Saturday night into Sunday, according to the hurricane center's latest advisory.

A tropical storm watch has been issued for the Florida Keys from Ocean Reef to Key West and for the Dry Tortugas, as Laura is expected to pass just south of the Keys on Monday, forecasters said.

Laura is expected to strengthen to a hurricane in the warm waters of the Gulf of Mexico by Tuesday and make landfall in Louisiana on Wednesday. The storm could become a Category 1 hurricane but that prediction might be conservative as the warm Gulf waters could allow for rapid strengthening of the storm, according to the weather service.

While it's unclear how the storms will develop, forecasters say two potential hurricanes could make landfalls in Louisiana within a few days.

Authorities in Grand Isle, Louisiana, have called all campers, RVs and boaters to voluntarily evacuate due to the potential impact of the storms. A state National Guard unit was placing sand sacks along the town and officials were preparing generators and pumps, the Louisiana Coastal Protection and Restoration Authority tweeted.

Residents are advised to bring all vehicles, boats and campers to higher ground.

"We want to make sure residents are safe as these storms approach so we are taking all the necessary precautions to be fully prepared," said Jean Lafitte Mayor Tim Kerner in the release.

Mandatory evacuations have been issued in Plaquemines and Lafourche parishes starting Sunday evening. Lafourche Parish has evacuation orders that begin at noon Sunday.

"This is unlike anything we have seen, with two hurricanes expected to impact our state nearly back to back," Edwards said in the release. "This may mean that people will have to shelter in place for more than 72 hours and that there may not be time to do things like restore lost power between the two storms."

Having two systems so close to the US at the same time complicates things to say the least.

"It's always tough to predict hurricanes, especially their intensity," CNN meteorologist Dave Hennen says. "In this case, it's tough to say at this point which storm will be the strongest. The storms could potentially interact with each other and that makes this forecast (or two) even more complicated."

Two tropical storms head to the Gulf of Mexico

Both systems are headed to the Gulf of Mexico. This is a rare occurrence as only twice in recorded history have two systems that were tropical storm strength or stronger been in the Gulf simultaneously.

Right now, both storms could possibly intensify to hurricane strength as they move through the Gulf.

"We have never had two hurricanes in the Gulf of Mexico simultaneously," said Phil Klotzbach, a tropical researcher for Colorado State University.

As of now, these systems are still several days away from impacting the US, so there is a lot that could change. However, since there are two systems at play here, essentially everything from Texas to Florida is an option.

"Near the end of the period, (Tropical Storm) Marco's track and intensity could be influenced by Tropical Storm Laura, which is also forecast to be over the Gulf of Mexico," according to the hurricane center, although the details on that interaction are still unclear.

Not to mention evacuations.

"The Gulf of Mexico is very warm and conducive to very rapid intensification," said CNN meteorologist Chad Myers. "Two landfalling hurricanes in close proximity to each other make evacuation plans that much more difficult."

Power companies may also encounter a prospect they've never dealt with before: restoring power after two storms hit amid a global pandemic.

We are still weeks away from peak of hurricane season

The statistical peak of Atlantic hurricane season is September 10, which is still several weeks away. What's more concerning is that 85% of major hurricanes (Category 3 and above) occur after August 20, but 2020 has been quite an active season already.

When Tropical Storm Laura was named on Friday it set a record for the earliest "L" named storm. That has happened eight other times so far in 2020, as Cristobal, Edouard, Fay, Gonzalo, Hanna, Isaias, Josephine, and Kyle achieved this same record for their respective letters. Tropical Storm Marco quickly followed suit Friday evening becoming the earliest 13th named storm.

There are a lot of comparisons out there to the record-breaking 2005 Atlantic hurricane season. Not only is this year's hurricane season currently on pace to match the number of named storms in 2005, it also happened to be a year where La Niña developed in the autumn.