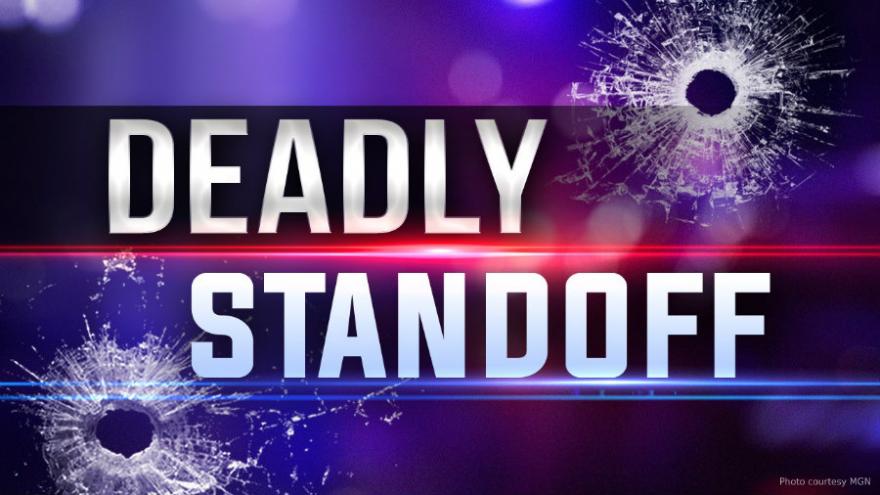 (CNN) -- A former client at the Veterans Home of California and three women he held hostage during an apparent hourslong standoff on Friday have been found dead, authorities said.

Hostage negotiators spent hours trying to contact the gunman at the facility in Yountville until shortly before 6 p.m. they found him and three women dead, said Chris Childs, assistant chief of the California Highway Patrol's Golden Gate Division.

The suspect was identified as 36-year-old Albert Wong of Sacramento, the Napa County Sheriff-Coroner's Office said.

Wong was a client of The Pathway Home, a counseling program for veterans who suffer post-traumatic stress disorder (PTSD), which is on the property. He left the program two weeks ago, according to State Senator Bill Dodd.

The victims were identified by the coroner's office as Christine Loeber, 48; Jennifer Golick, 42; and Jennifer Gonzales, 29.

Loeber was the executive director of The Pathway Home and Golick worked there as a staff psychologist. Gonzales was a clinical psychologist with the San Francisco Department of Veterans Affairs Healthcare System.

"These brave women were accomplished professionals who dedicated their careers to serving our nation's veterans, working closely with those in the greatest need of attention after deployments in Iraq and Afghanistan," a spokesperson with The Pathway Home said in a statement.

It's unclear if the women were chosen at random or had a connection with the gunman.

Investigators are working to determine when during the standoff the deaths occurred.

The Yountville facility is the largest veterans' home in the country, according to the California Department of Veterans.

"Our hearts go out to their families and loved ones and the entire community of Yountville," Brown said in a statement.

The governor has ordered flags in the state's capitol to fly at half staff in tribute to the victims and their families.

'He just walked in with his rifle'

"They were having cake and toasting, apparently he just walked in with this rifle," Kamer said. He said his wife and some other employees managed to escape, though he didn't say how.

Authorities didn't give a motive for the gunman's actions.

As the man held three people hostage in a room inside the building, authorities tried to make contact and at some point exchanged gunfire with the gunman.

"We've tried numerous times and been trying since 10:30 this morning to contact him by his own cell phone and also the phones in the dorm area," Robertson said.

Largest veterans home in the US

Marlon Harrison was one of the family members who gathered outside the gates to the home as dozens of residents and staff remained on lockdown.

"I'm waiting for a phone call from my daughter," Harrison said. "It's considered a lockdown building, you can't go in unless authorized."

About 70 students who were inside a theater on the grounds of the veterans home were also safely evacuated, Robertson said.

The Northern California facility was founded in 1884 and houses about 1,000 aging veterans.

The veterans home is an important part of the Napa Valley Community, with the 1,200-seat Lincoln Theater, a golf course and a large library, CalVet said.

Yountville is a town of about 3,000 residents in the north San Francisco Bay area.