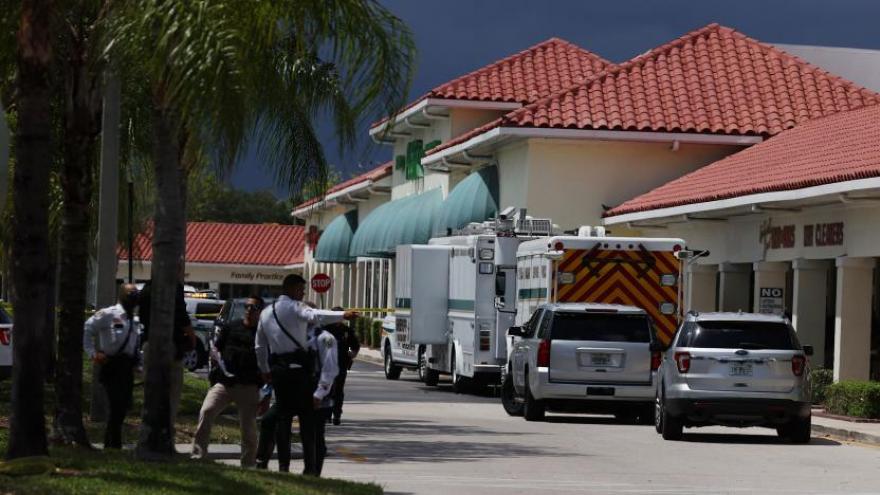 Authorities stand outside of a Publix supermarket where a woman, child and a man were found shot to death on June 10, in Royal Palm Beach, Florida. The sheriff's office has identified the gunman in a fatal shooting at a Publix supermarket as 55-year-old Timothy J. Wall.

(CNN) -- The gunman who opened fire in a Florida grocery store Thursday first fired one shot that killed a 1-year-old boy before struggling with the boy's 69-year-old grandmother and then fatally shooting her, authorities said.

The shooter, identified as 55-year-old Timothy J. Wall, then killed himself, according to the Palm Beach County Sheriff's Office.

The motive in the shooting remains unknown. The Palm Beach County Sheriff's Office has said there is no known relationship between the shooter and the victims, who will remain unidentified after their families invoked Marsy's Law.

Palm Beach Sheriff Ric Bradshaw indicated in a news conference Friday that Wall had expressed on social media a desire to "kill people and children."

Sheriff Maj. Talal Masri said authorities received the first call about shots fired at 11:35 a.m. By the time they arrived at the Publix Supermarket in Royal Palm Beach, they found both victims and the shooter dead.

Based on a review of video from inside the store, Masri said investigators determined the victims had arrived at 11:07 a.m.

Wall entered the store at 11:29 a.m., Masri said, carrying a golf putter like a walking stick. At 11:30 a.m., the grandmother and her grandson entered the produce section. Wall followed a minute later and was looking toward the victims, Masri said.

At 11:34 a.m., Masri said, Wall approached the victims, pulled out his gun and fired a single round, killing the child in the shopping cart. A struggle ensued between Wall and the grandmother, who was eventually thrown to the ground. Wall then shot her, too, Masri said.

Wall then killed himself.

The investigation remains ongoing, Masri said. Detectives have so far interviewed more than 30 people who were inside the store who either saw or heard the shooting happen.

Bradshaw said he was "angry" no one had reported Wall's Facebook activity prior to the shooting. CNN cannot corroborate Bradshaw's assertions.

"The real sad part of this, other than the fact that two people are dead, is that there was a chance that this could be stopped," Bradshaw said.

If someone had notified authorities, Florida's red flag law might have allowed authorities to take away Wall's firearm, Bradshaw said. He later added authorities are still investigating who the gun was registered to and how Wall obtained it.

Palm Beach County Commissioner Melissa McKinlay issued a statement asking for thoughts and prayers for the victims' family and painted the shooting as yet another example of the scourge of American gun violence.

"Tomorrow we must step up and engage in a very honest conversation about why this happened and what we can do specifically to prevent this violence," she said. "Inaction is not an option."

A spokesperson for Publix told reporters Friday the store had been disinfected and rearranged.

"We discarded any product that was impacted and we also redesigned the layout of our store," said Maria Brous, Publix Supermarkets director of communications.

The employees impacted are being offered grief counseling, Brous said. The store will reopen at 7 a.m. on Saturday, Brous told CNN.