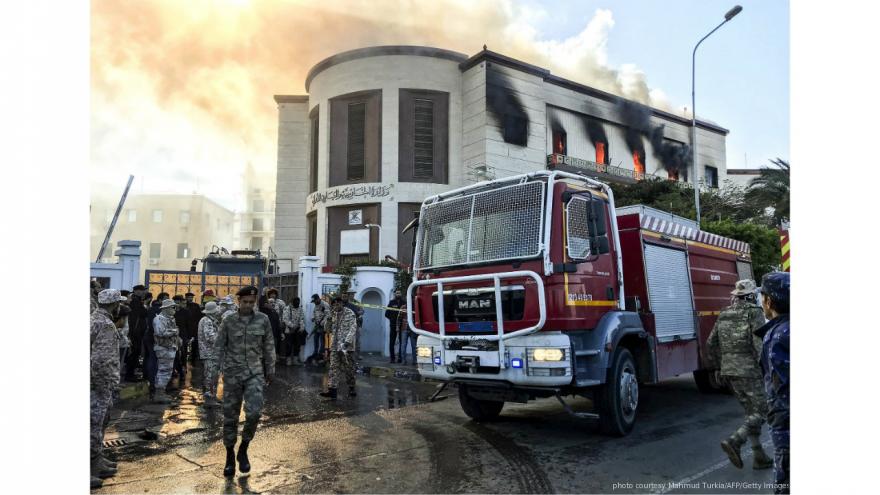 (CNN) -- Gunmen armed with machine guns stormed the foreign ministry of Libya's internationally recognized government in Tripoli on Tuesday, killing three people who worked there, a spokesperson for the United Nations-backed Government of National Accord told CNN.

One of the victims was a high-ranking official, the spokesperson added. 18 others were injured, according to the Health Ministry.

Three gunmen died in the attack that happened at around 9.30 a.m. local time. One of the gunmen is believed to have been killed after an explosion was heard in the top floor of the building, politician Guma El-Gamaty who was in the area said.

"The top floor was totally engulfed in fire; you can still see smoke coming from the building," he said.

Gamaty added that emergency services and security forces were on the ground dealing with the situation, which he believed was under control.

Related: Week of chaos a reminder that Libya is still broken

Libya's Foreign Minister Mohamed Siala addressed the attack during a news conference in which he called on the international community to lift the UN partial arms embargo.

"Such attacks will not undermine the determination of Libyans to build their state of democracy and law," Siala said. "This attack will not discourage the ministry staff from serving Libya and the Libyan people."

"Terrorism will not triumph over the Libyans' decision to move forward towards building their state and renouncing violence. We will not accept any attack on a state institution, especially one committed by a terrorist group," said Ghassan Salamé, the Special Representative of the Secretary General in Libya.

"We will work with the Libyan people to prevent terrorist groups from turning Libya into a haven or an arena for their crimes."