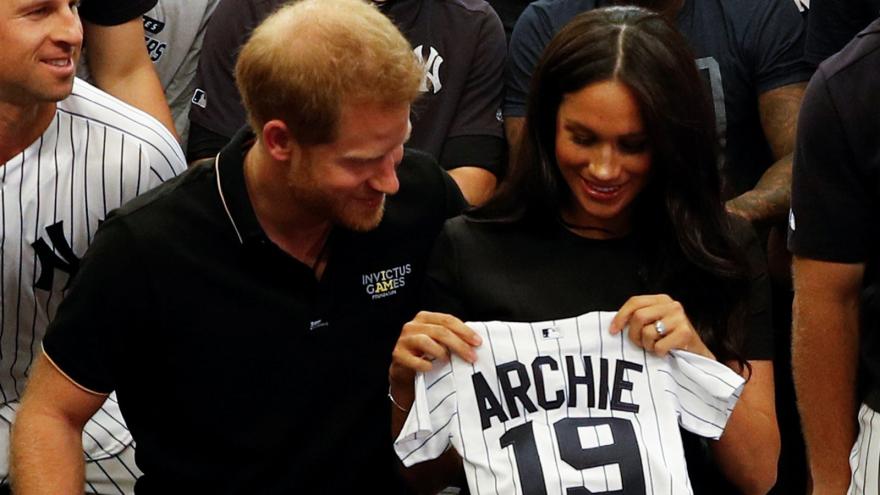 The Duke and Duchess of Sussex greeted both teams just ahead of game one of their two-game series in London, the first in Major League Baseball to be played in the UK.

The royal pair, both dressed in team-neutral black, visited the Red Sox's temporary clubhouse first, where they were gifted a red team onesie and matching miniature baseball bat for their month-old son Archie.

Meghan generously accepted a hug from outfielder Mookie Betts, who's believed to be her distant relative -- a Boston Globe reporter traced their lineage back to the same small town in Alabama.

Not to be outdone by their New England rivals, the Yankees opted to give the couple an infant-sized jersey embroidered with Archie's name and the number 19 for his birth year.

Clearly, the gift won Harry over.

"You guys have beaten next door's present, by the way," he told the team.

Harry threw out the first pitch of the series, hosted in partnership with the Invictus Games Foundation. The charity benefits the titular sporting event for wounded veterans, which Harry founded in 2014.

London is the MLB's latest international locale, following two spring series in Mexico and another in Tokyo earlier this year.

Officials had three weeks to overhaul London Stadium, famous for its use for track and field in the 2012 Summer Olympics, into a proper ballpark. The league said it imported nearly 142,000 square feet of artificial turf from France and constructed new clubhouses and dugouts for the series.