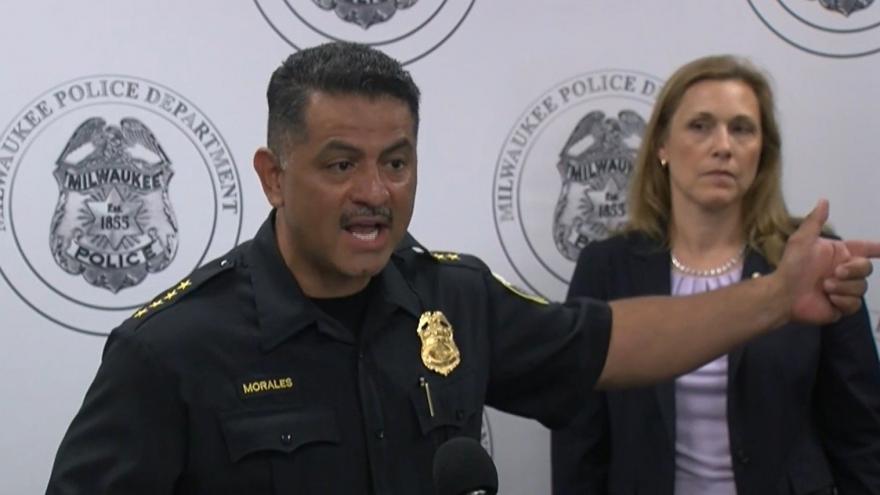 MIWAUKEE, WI (WDJT ) -- During an announcement of a federal arrest made in the last week, Milwaukee Police Chief Alfonso Morales got defensive during a news conference on Friday, June 5.

Morales spoke out against the threat police officers face on the job, saying the city needs to do better toward police.

"I’m angry because a political figure approached me yesterday and said the rumor amongst us in the political group, here in the City of Milwaukee, we’re told that that officer shot himself. There was a person in an auto that fired three shots at that officer. I'm angry because we're not being believed that a police officer was shot,"Morales said. "PEOPLE ARE TRYING TO KILL POLICE OFFICERS. We have officers that are being followed home, the Madison sheriff had his house surrounded. Why are our families, why are our families now being targeted? You talk about crucify, what are we going to get by doing that? That has to stop."

"Something happens in another city, another state, and it’s very, very easy to jump on the bandwagon and say Milwaukee can do better. Shame on those, that’s an easy narrative, it’s a very easy narrative to jump on," Morales said.

"2,000 years ago, an angry mob came before people to say, 'Crucify that man', that man being Jesus Christ. What are angry mobs doing today? We say we’re civilized, but are we really? Let’s think about that -- and that includes you, media – you play a big role in changing the perceptions that are out there." he added.

When asked who he was saying was crucified by an angry mob, Morales said law enforcement.

"Law enforcement throughout our nation is being crucified. That’s what they want, that’s what these angry mobs are doing. There’s several different types of groups out there protesting. There’s peaceful protesters that are angry for what happened in Minnesota and we get that, we’ll work with that," he said, "but there’s also people taking advantage to loot our cities, to burn our cities, and make no mistake, throughout the nation, there’s individuals or groups out there that want to burn a police station down. That is not going to fix anything."

"He's upset about police being crucified, no, what happened instead is Mr. Floyd was suffocated with somebody's knee," said State Senator Lena Taylor, who was with protesters Friday night.

"If right now, Jesus was here, he would be with the people, that's where he always found himself to be," she said, "And who is the person, the individuals, who are out here normally doing this work, blocking the streets? The police."

She said she believes the department can move forward in a way that shows solidarity to humanity.