Haiti President Jovenel Moise assassinated in attack on his residence 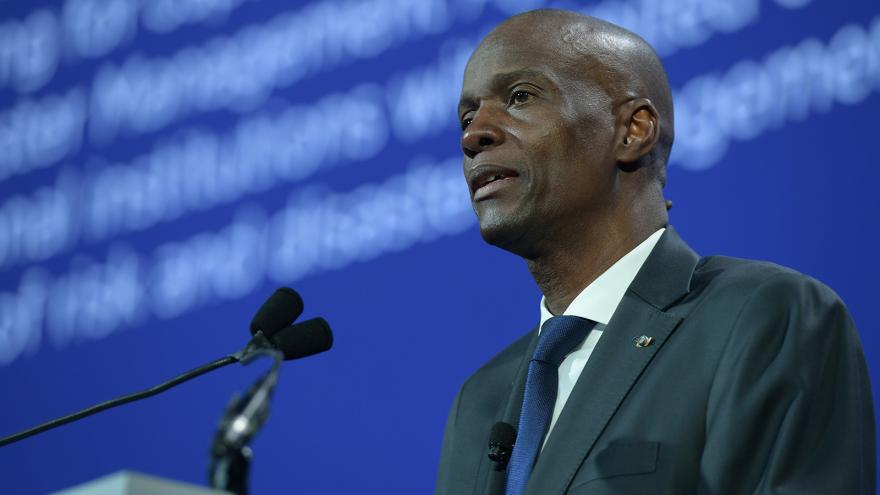 (CNN) -- Haiti's President Jovenel Moise was killed during an attack on his private residence early on Wednesday, according to the country's acting Prime Minister Claude Joseph.

Joseph said in a statement that a group of unidentified individuals attacked Moise's home at around 1 a.m. and fatally wounded the head of state. The statement does not specify how the President was killed. Haiti's first lady was shot and is receiving treatment, he added.

The Prime Minister called the assassination a "heinous, inhumane and barbaric act" and called for calm.

"The security situation in the country is under the control of the Haitian National Police and the Haitian Armed Forces," the statement added. "All measures are being taken to guarantee the continuity of the State and to protect the Nation."

It isn't immediately clear who will replace Moise. Judge Jean Wilner Morin, President of the National Association of Haitian Judges, told CNN that the line of presidential succession in the country is now murky.

Haiti's President of the Supreme Court would normally be next in line, but he recently died of Covid-19. For the acting Prime Minister Joseph to formally replace the President, he would have to be approved by Haiti's parliament, said Morin. But without recent elections, the parliament is effectively defunct.

Moise was 53 years old. The former banana exporter was a controversial figure and spent most of the past year waging a political war with the opposition over the terms of his presidency.

Many in the country were disputing his right to continue serving in the presidency this year.

While the United States, United Nations and Organization of American States supported his claim to a fifth year in office, critics say he should have stepped down in February 7, 2021, citing a constitutional provision that starts the clock once a president is elected, rather than when he takes office.

Moise claimed his five-year term should end in 2022 because he wasn't sworn in until February 2017. His inauguration was delayed over allegations of voter fraud during the 2015 election, which led to a presidential runoff that was postponed twice over what authorities called threats and "security concerns."

Throughout his presidency, Moise had repeatedly failed to hold elections at local and national levels, leaving much of the country's governing infrastructure empty.

A constitutional referendum originally scheduled to be held last month was postponed and is now set to be held in September, alongside the presidential and legislative elections, authorities said, blaming the Covid-19 pandemic for the delay.

The country's electoral council said in a statement that the country would implement health measures to curb the spread of the coronavirus so that Haitians could cast their votes safely.

Municipal and local elections have been scheduled for January 16, 2022, the official electoral calendar also showed.

Moise's death takes place against a background of extreme violence in Haitian capital Port-au-Prince that has claimed the lives of many citizens and escalated notably in June.

The US Embassy in Haiti issued a security alert following the news of the assassination. It said in a statement that it would be closed on Wednesday due to the "ongoing security situation."

White House press secretary Jen Psaki called the attack a "tragedy." "It's a horrific crime," Psaki told CNN. "We stand ready and stand by them to provide any assistance that is needed ... it's important that people of Haiti know that." She added that the White House was assessing the situation and gathering information.

Rival groups have battled with one another or the police for control of the streets, displacing tens of thousands of people and worsening the country's humanitarian crisis. Infamous ex-police officer Jimmy Cherizier last week vowed before local media to carry out a "revolution" in the city.

Meanwhile, the coronavirus pandemic has been worsening in Haiti in recent weeks. Last month, Dr. Carissa Etienne, director of Pan American Health Organization, warned that the response in the country must be scaled up dramatically to cope with sharply escalating cases, hospitalizations and deaths.

Haiti has reported more than 19,000 Covid-19 cases and 462 deaths, according to the Johns Hopkins University tally.

At the same time, the country -- the poorest in Latin America -- is facing a dire economic situation. Its economy had been contracting even before the pandemic and shrunk further 3.8% in 2020, with about 60% of the population now living in poverty, according to the World Bank.

UNICEF, the United Nations' children's agency, said in May that severe acute childhood malnutrition is expected to more than double in Haiti this year as it deals with rising violence, Covid-19 and a lack of access to essential services.