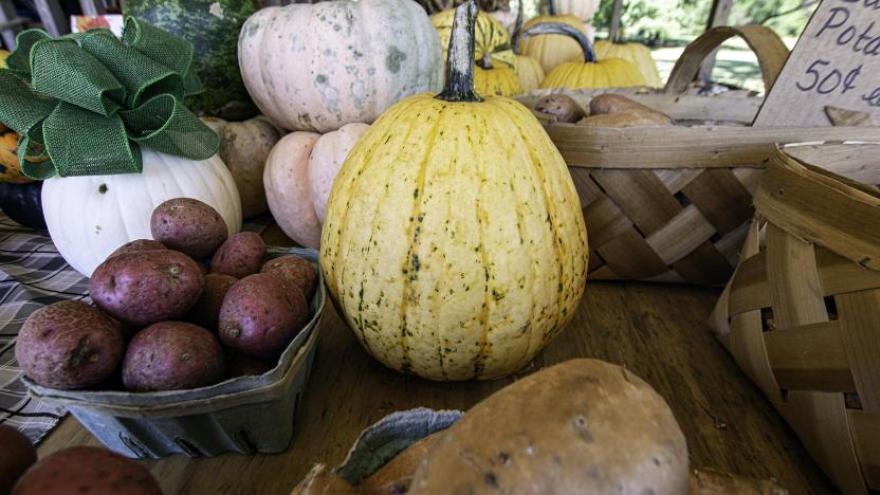 Before pumpkins, people carved scary faces into turnips and potatoes.

(CNN) -- Halloween is a time for families to carve pumpkin lanterns. It's a time for people of all ages to passionately debate about the value of candy corn. And it is, of course, a time for children to go from house to house as they trick-or-treat for their favorite candy bars.

But Halloween candy is a relatively new staple of the holiday -- only first becoming popular and widely distributed in the 1920s and 1930s and not becoming a major player until the 1950s. So what treats did people enjoy before that?

Halloween is believed to have derived from the pre-Christian feast day Samhain, which was celebrated by Celtic peoples. On Samhain, during which bonfires were lit, it was believed that the spirits of the dead were granted access to the otherworld. During Samhain, a common practice was mumming, in which troupes of amateur actors would go from house to house and perform in exchange for food and drink.

Samhain was then appropriated into the Christian holiday of All Saints' Day -- or All Hallows Day -- celebrated on November 1. Fittingly, All Hallows Eve, or what later became Halloween, fell on October 31. Halloween traditions came to the US via Irish immigrants around the mid-19th century, amid the Irish potato famine.

Early on, people continued the millennium-old tradition of baking soul cakes, small round cakes that resemble a shortbread biscuit. These cakes were given out to "soulers," who were mainly children and the poor. They sang and said prayers on behalf of the dead while going door to door.

Around this time, Americans would carve jack-o'-lanterns out of potatoes and turnips. The tradition, which began in Ireland and Scotland, involved carving scary faces into these tubers and placing them by windows or doors to scare off wandering evil spirits such as Stingy Jack, who was said to have invited the Devil to have a drink with him.

Apples and nuts were major treats

Although candy apples are now a popular treat during Halloween season, apples had a much more prophetic -- and menacing -- purpose almost 200 years ago. In the mid-19th century, many Halloween celebrations involved apple bobbing -- a tub was filled with water and apples, and players would try to catch one with their teeth. Young unmarried people would compete to be the first to bite into an apple, which signaled that they would be the next to be allowed to marry.

Some regions of the US held Snap Apple Night parties, a comparatively risky tradition in which an apple was put on one end of either a stick or string with a lit candle fixed at the other end. Participants tried to take a bite of the apple while the stick was spun around, trying to avoid the hot candle wax.

Apple bobbing was a popular activity a few decades later in 1914 at a massive Halloween party in Kansas arranged by Elizabeth Krebs. Tired of seeing her garden destroyed by young people celebrating Halloween each year -- since it was often common for pranksters to wreak havoc on people's property at that time -- Krebs helped pioneer parades and costume contests in an effort to provide less destructive outlets for marking the holiday.

In another apple tradition, young women would peel apples and throw the peels over their shoulders in hopes that the peels would form the pattern of their future husband's initials.

Americans would also occasionally get together on Halloween for Nut Crack Night festivities, in which people ate freshly harvested hazelnuts and chestnuts. In some cases, a young man would assign names to each nut -- the one that burned brightest in a fire could signify his future sweetheart. Another tradition involved a young couple putting two nuts in the fire and seeing if they jumped apart or stayed together, as described in Mary E. Blain's 1912 book "Games for Hallow-e'en."

Candy corn is perhaps one of the oldest Halloween candies still eaten today, dating back to the 1880s. It was first supposedly invented by George Renninger, a candymaker at Philadelphia's Wunderle Candy Company. In 1900, the Goelitz Candy Co. began making it in large quantities. Candy corn was designed to look like chicken feed, since at the time candy corn first emerged, about half of Americans worked on farms.

Halloween candy became quite popular around the turn of the 20th century. Hershey's Milk Chocolate bar was first produced in 1900, with Hershey's Kisses following seven years later. Chocolate was previously considered a luxury item rarely consumed by the average American, but Hershey's chocolate factory in Pennsylvania allowed the chocolate to be mass produced for significantly cheaper prices. An advertisement from 1906 in the New York Times boasted of homemade buttercups, caramels and Waldorf Chocolates for 25 cents per pound, or about $7 today.

Although candy companies produced candy such as the Milky Way bar and Snickers bar in the 1920s and early 1930s, candy was not yet the definitive Halloween treat it is today. Sugar became more affordable around this time, which made candy cheaper to produce, but trick-or-treating often involved the distribution of cookies, fruit, nuts and even toys and money.

Organized trick-or-treating grew in the 1930s partially in response to dangerous pranks on Halloween during the Great Depression, but this was suddenly halted when World War II broke out. Sugar rationing meant that only a few had access to candy, so people needed to get creative with Halloween food traditions. In the 1950s, candy manufacturers promoted their delectable goods for Halloween, especially during the height of the baby boom.

In the 1970s, all this changed. Wrapped candy produced in a factory was considered one of the only goods that could be handed out, since many parents feared that their children's candy would be tampered with. The Halloween candy scare likely began with a 1970 New York Times op-ed suggesting that strangers could use trick-or-treating as a way to poison children, citing two unconfirmed incidents in upstate New York speculating that an apple might have a razor blade hidden inside. Halloween candy sales in 1982 dropped by 20% to 50%, and 40 American cities canceled Halloween entirely, according to Eater's "Gastropod" podcast.

A number of deaths among children on or after Halloween, which were believed to be unrelated to poisoned candy, sparked widespread panic, with some communities banning trick-or-treating outright. Despite this hysteria, a comprehensive 1985 study did not find even a single confirmed incident of a child's death or serious injury from Halloween candy, as CNN previously reported.

This year, the National Retail Federation predicted that consumers will spend a record $10.14 billion on Halloween -- including $3 billion on candy. But while munching on your KitKat bar this Halloween, remember that 150 years ago, you may have been chowing down on chestnuts and finding a future spouse.