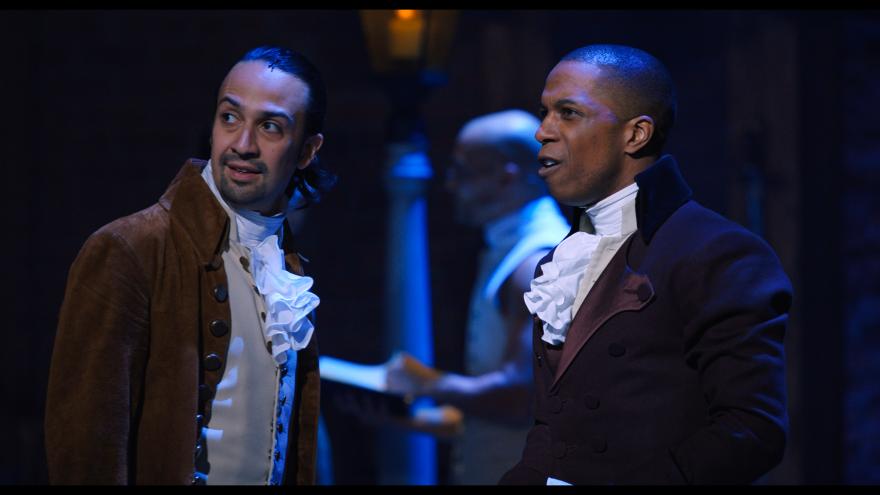 Lin-Manuel Miranda, Leslie Odom, Jr. in \'Hamilton.\' In honor of the Fourth of July, here are four things to know about the show. Credit: Disney+
By Lisa Respers France, CNN

By now, most people have heard of the Tony Award-winning musical "Hamilton," which centers on Founding Father Alexander Hamilton. And it used to be super-difficult -- and often super-expensive -- to see the Broadway production.

But thanks to Disney+, you can now not only sing along, but also schedule your own intermission. The filmed version of the show started streaming Friday, which seems right on time for the Independence Day weekend.

So, in honor of the Fourth of July, here are four things to know about the show:

Filmed in 2016 at the Richard Rodgers Theatre on Broadway, the recording was directed by Thomas Kail, who won a Tony for the stage version.

Miranda said Goldsberry and Okieriete Onaodowan would be the ones busting the hardest moves in backstage dance parties during the show.

"There's whole sections of the backstage traffic I never saw because I was onstage," Miranda said. "I would look over and be like, 'What's happening stage right?' "

And Odom hosted the dance party during intermission, Miranda said.

There actually is an intermission

Of course, you are free to take a break whenever you want to, but there is a one-minute intermission timer during the 161-minute film.

Not everyone is a "Hamilton" fan

While the musical uses a diverse cast, some have questioned having people of color play men who owned slaves or were not opposed to slavery.

The musical debuted in 2015, and a year later Slate published a Q & A with historian Lyra Monteiro, who asked: "Is this the history that we most want black and brown youth to connect with—one in which black lives so clearly do not matter?"