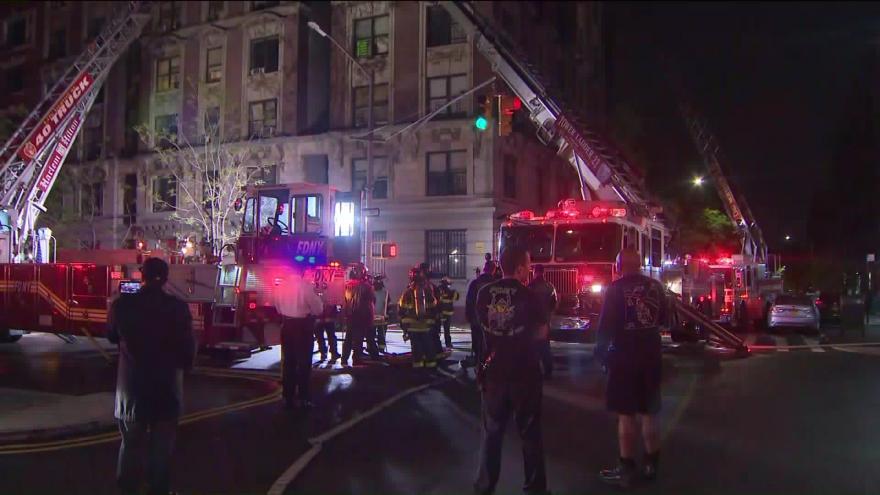 (CNN) -- A fire that began in the kitchen of a fifth-floor Harlem apartment killed a family of two adults and four children overnight Wednesday, New York City officials said.

Police responded to a 911 call of a fire at about 1:40 a.m. early Wednesday morning at the Frederick Samuel Houses in Harlem on Adam Clayton Powell Jr. Boulevard. After firefighters put out the blaze, responding officers found six people unconscious and unresponsive in the rear bedrooms, police said.

Emergency responders pronounced six people dead at the scene, including a 45-year-old woman and a 33-year-old man. Two girls ages 11 and 6 and two boys ages 8 and 3 were also dead.

"This is a gut-wrenching moment for all of us," de Blasio said. "At this point, all signs point to a horrible, terrible accident."

Three others suffered minor smoke inhalation and were taken to area hospitals, said Brian Fitzgerald, spokesperson for FDNY. Not all of the tenants were displaced, and the Red Cross was called to the scene.

Fire Commissioner Daniel Nigro said that when firefighters arrived the fire stretched out the windows on two sides of the building. The bodies were found in two bedrooms in the six-room apartment.

The fire began in the kitchen and eventually spread to every room in the apartment, Nigro said. The kitchen is the closest room to the front door, and the fire escapes were on the opposite end of the apartment from the rear bedroom, so the family was not able to get to an escape, Nigro said.

New York City Housing Authority interim chair and CEO Kathryn Garcia said the housing complex had 62 units and 129 families. The smoke alarm and carbon monoxide detector in this apartment was most recently tested in January.

The cause of the fire will be determined by the city's fire marshal, but there does not appear to be any signs of criminality, police said.

'They were always happy'

Eric Allen, a neighbor who has lived in the building for more than 10 years, said he and his wife smelled smoke early Wednesday. When he went out to see what was going on, he saw the floors above him on the opposite section were on fire, so he got his wife and children and evacuated the building.

"It could easily have been us in that apartment," he said.

Almost all of the apartment building tenants were standing out front, including some who were half-dressed. After about half an hour, he could see that firefighters were putting the fire out, he said.

Allen said he remembered seeing the family of six around the building and that their kids interacted with his kids.

He said the family had lived in the building for at least five years.

"You would see the family come and go, and you're not gonna see them anymore," he said. "It's such a horrific event, you can't imagine anything like that."