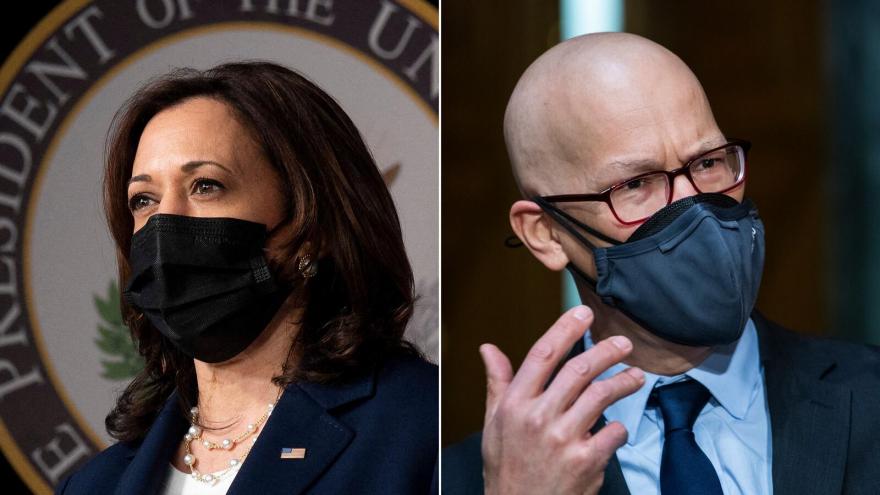 Vice President Kamala Harris cast her first tie-breaking vote, voting to advance the nomination of Colin Kahl to be the Pentagon's undersecretary for policy.

(CNN) -- Vice President Kamala Harris cast her first tie-breaking vote related to a Biden administration nominee on the Senate floor Wednesday evening, voting to advance the nomination of Colin Kahl to be the Pentagon's undersecretary for policy.

The Senate deadlocked 50-50 on a straight party-line procedural vote to discharge Kahl's nomination from the Armed Services Committee, requiring Harris to break the tie. She'll likely have to cast two more tie-breaking votes on Kahl's nomination before he is confirmed to the No. 3 civilian position at the Pentagon.

Wednesday was the first time Harris had to cast a vote in the Senate on a Biden nominee. She has previously cast three tie-breaking votes on legislation, including during the Senate's late-night budget debate in February.

Harris was already on Capitol Hill earlier Wednesday in anticipation of a potential tie-breaking vote on another nominee, until GOP Sen. Lisa Murkowski of Alaska joined Democrats to support the nomination of Vanita Gupta to be associate attorney general. Gupta was confirmed by the Senate by 51-49.

But Republicans were unified in their opposition to Kahl. In a contentious confirmation hearing, they criticized Kahl over his tweets during the Trump administration, including statements that the "Republican party has debased itself at the altar of Trump" and the GOP was the party of "ethnic cleansing," in response to a story about Syria. Kahl apologized to the Republican senators for using "sometimes disrespectful" language in tweets.

"Republicans on the committee did not vote against Dr. Kahl simply because we disagreed with his policy views," said Sen. Jim Inhofe of Oklahoma, the top Republican on the Senate Armed Services Committee. "Good and kind people can disagree with each other — they don't have to resort to name calling, ad hominem attacks and accusations of war crimes."

Democrats, however, have dismissed the GOP concerns and moved forward with Kahl's nomination. And unlike the nomination of Neera Tanden to be President Joe Biden's budget director -- which was sunk thanks to opposition from Sen. Joe Manchin -- the West Virginia Democrat supported Kahl's nomination in committee, all but sealing his confirmation.

Manchin told CNN last month that Kahl's tweets weren't as "pointed" at specific individuals and senators and were focused much more on policy.

Kahl's nomination deadlocked in the Armed Services Committee, 13-13, which is why Wednesday's procedural vote was needed to discharge the nomination from the committee to the Senate floor.