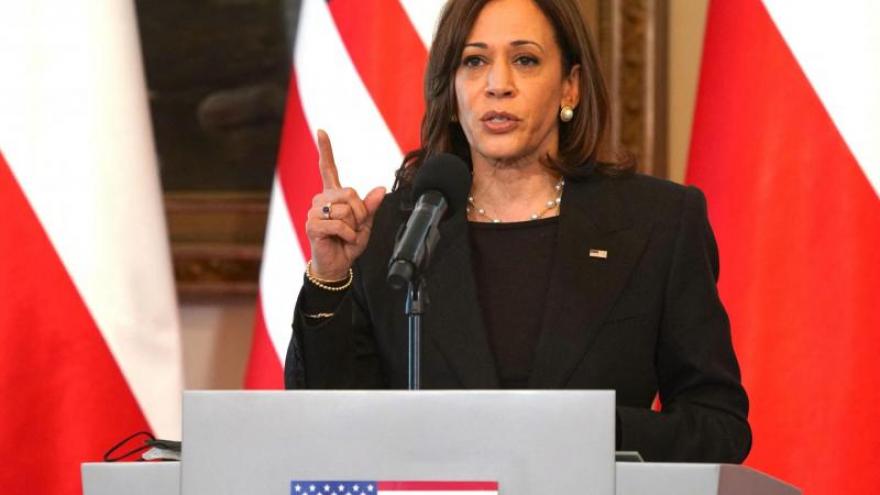 Vice President Kamala Harris ventured farther toward NATO's eastern edge Friday with a stop in Romania, a country suddenly thrust into priority position for the United States as fighting rages over its border in Ukraine.

(CNN) -- Vice President Kamala Harris on Friday described the United States' commitment to defending NATO members as ironclad during remarks following a meeting with the Romanian President as she looks to reassure allies along NATO's eastern edge.

"We take very seriously our role and the relationships that we have within the NATO alliance," Harris said at a joint news conference with Romanian President Klaus Iohannis. "We take seriously and are prepared to act on the words we speak when we say an attack against one is an attack against all."

"We are firm in our commitment," she added. "When I say and we say over and over again, President Joe Biden says: We will defend every inch of NATO territory."

Harris said responding to the Russian invasion of Ukraine means reaffirming the NATO commitment, and said, "America's commitment to Article 5 is ironclad. We take very seriously our role and the relationships that we have within the NATO alliance." Article 5 is the principle that an attack on one NATO member is an attack on all the nations in the alliance.

"We are clear that the work that is to be done in response to Putin's war includes standing strong within the alliance to support the needs of our partners," she said.

She said the US would commit more funding to help alleviate the humanitarian crisis in Europe.

Harris met with Iohannis on Friday afternoon on her second and final stop on her trip to Europe. She is set to return to Washington later in the day.

In short remarks ahead of their sit-down talks, Harris and Iohannis said they wished they could be meeting under difference circumstances.

"Difficult times," Iohannis observed. "Your visit here gives us strength and is living proof of our strong partnership."

Harris said reaffirming US commitment to Romania and NATO was the reason for her trip, which is the highest-ranking visit to the region since the war in Ukraine began.

"That is why I am here," she said. "To reaffirm our commitment to this partnership, to the friendship and also to the NATO alliance as a whole and everything that the United States has been and is prepared to do going forward, it terms of the strength of that relationship and its endurance."

Her trip has been a test both of her diplomatic abilities and the resolve of the broader Western allies to forcefully confront Russian President Vladimir Putin for launching the largest ground invasion in Europe since World War II.

Biden has already dispatched 1,000 troops to Romania and pledged support for the country as it accommodates a major influx of migrants fleeing the war next door. But a visit by his number two is meant to demonstrate American commitment at a deeply uncertain moment for the region.

Unlike Ukraine, Romania is a member of NATO, and an attack on the country by Russia would trigger the alliance's collective defense treaty, which says an attack on one is an attack on all.

But even the protection of NATO, a system of alliance bases and a missile defense system can't entirely calm nerves in this former Soviet satellite state that's been invaded by Russia repeatedly over the course of its history.

European anxiety over Putin's next steps were on display in Bucharest, when Harris was asked what the chances are of the war extending into Romania.

"As it relates to what might be the future conduct of Putin, I cannot speculate," Harris said. "But we are clear in our position, which is that as a member of NATO, an attack against one is an attack against all."

Iohannis sought to downplay fears that Putin could have his sights set on Romania next.

"We do not have information that Romania would represent a target of aggression," he said, through a translator. "On the other hand it is very clear it is very clear that this Russian action, this war started against Ukraine, definitely created a difficult to produce result, a visible firm, a clear result. And it's represented by the unity of NATO."

Even as Russia and Ukraine engage in halting talks aimed at ending the war, Harris said Putin isn't interested in "serious diplomacy." She said the United States is committed to finding a diplomatic solution, but didn't sound optimistic that Moscow was currently seeking one.

"From the beginning, the United States has been attempting sincerely to engage in diplomacy," she said. "From everything that we know and have witnessed, Putin shows no sign of engaging in serious diplomacy."

She said Russia was engaging in "lies" and "misinformation," a playbook she said the US had long identified, and added that as efforts at diplomacy proceed, Russia should be held accountable for its actions.

"We maintain that diplomacy is the way to resolve these issues," she said, saying that should "coexist with our commitment to ensure that our alliances are strong, and that there must be serious consequence and accountability for what Russia is doing."

Harris on a critical diplomatic trip

Harris arrived in Bucharest from Poland, where she reinforced American commitment to another NATO ally that is watching warily for Putin's next move. She met with American and Polish troops Friday morning and said the US was committed to protecting "every inch" of NATO territory.

She announced the US had fulfilled a delivery of Patriot missiles to Poland and promised to support the country as it grapples with its own surge of migrants, which has strained public resources, despite an overwhelming welcome from the Polish people.

Still, her visit also underscored the limits to American or NATO willingness to protect civilians in Ukraine. A plan that had been considered to supply Ukraine with Polish fighter jets was deemed impossible by the Pentagon before she arrived, and she offered little indication it may be revived in the future.

Instead, Harris underscored the military support the United States is already providing Ukraine short of air power, including anti-tank missiles, which the country's president, Volodomyr Zelensky, has deemed insufficient.

"We're making deliveries every day in terms of what we can do," Harris said. Asked what more Ukraine could expect, she said, "That is an ongoing process and that is not going to stop to the extent there is a need."

Harris also amplified atrocities that she said are underway in Ukraine, though she stopped short of calling them war crimes. She called on the United Nations to investigate.

In Bucharest, her answer to a similar question was brisk.

"We are clear that any intentional attack or targeting of civilians is a war crime. Period," she said.

The administration has said that before an official designation on war crimes can be made, an investigation must proceed. But officials have been clear that Russia is targeting civilians, and made plain they believe such an action would constitute a war crime.

An official traveling with the vice president said her visit was intended as more than mere symbolism, designed to show the US was putting its "money where its mouth is" by sending additional troops to NATO's eastern reaches.

But the official also acknowledged that Harris' brand of reassurance diplomacy gained more significance because Biden is intent on avoiding direct conflict with Russia.

"The President's been pretty clear about not engaging in direct military conflict with Russia, not putting troops into Ukraine, but he's also been pretty clear ... about our determination to make Russia pay a price for that and to continue to provide assistance to Ukraine," the official said. "And that's why the vice president is here to make sure that we can do that in an effective way. And I think she has been very effective in doing it."

CLARIFICATION: This story has been updated to more precisely describe the political relationship between Romania and the Soviet Union.