Harris to focus on portfolio issues on trip to California 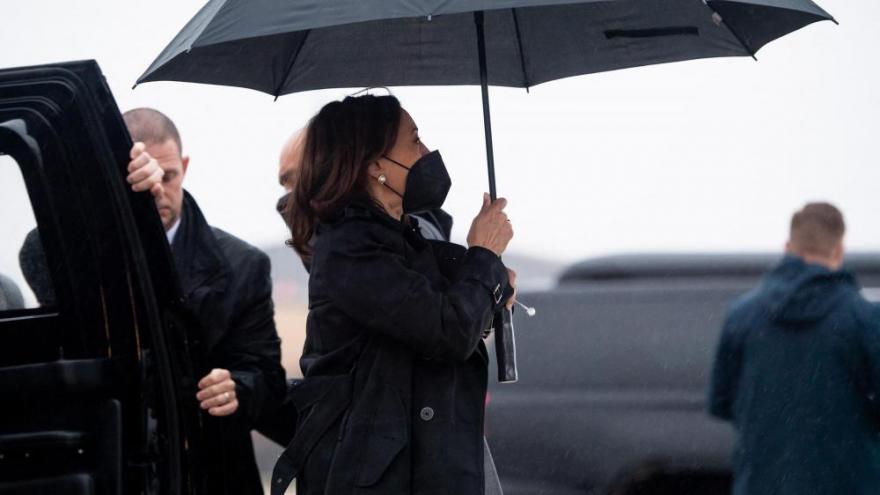 Vice President Kamala Harris, seen here in Maryland on March , will return to her native state of California on Monday.

(CNN) -- Vice President Kamala Harris is set to return to her native state of California on Monday for a series of events meant to showcase her leadership, as the White House struggles to reach an American electorate largely unconvinced of the Biden administration's progress.

"She is going home with the wind at her back," a source familiar with her trip told CNN. "She's getting to show her work a little bit and say, 'These are the issues that are important to me. I get to bring them home and show you what this administration is doing.'"

Both President Joe Biden and Harris have focused in recent days on their domestic agenda, as an avalanche of issues like rising inflation and sky-high gas prices threaten the Democratic Party's prospects in the fall's midterm elections.

Harris will fly Air Force Two directly to the Vandenberg Space Force Base, north of Santa Barbara, on Monday. While there she's expected to deliver remarks, the official told CNN, after meeting with members of the US Space Force and US Space Command. She will also receive briefings on the work to advance national security in space, a part of her duties as chair of the National Space Council.

"The vice president will be discussing our ongoing work to develop norms in space that advance US and international interests and preserve the security and sustainability of space," a White House official said. "One of her top areas of focus on the Space Council is advancing norms for peaceful and responsible behavior in space."

"I think it's a great opportunity for her to sort of reintroduce herself to her native state," Brian Brokaw, her campaign manager when she ran for the Senate, told CNN.

After a rocky first year, Harris and her team are trying to solidify the vice president's footing. Aides view the first few months of her second year as particularly successful for the vice president -- she recently made it through major foreign policy moments avoiding any discord, including high-profile trips to Munich and Poland amid Russia's invasion into Ukraine, that helped cement her place among Biden's top-ranking envoys to a continent thrust into conflict.

And domestically, Harris continues to carve out areas of policy focus that track with long-held passions. Recently, she ventured to Greenville, Mississippi, to talk about the administration's efforts -- which she is leading -- to prop up minority lending programs and small businesses. In Sunset, Louisiana, she spoke of the White House's efforts to expand broadband, a task Biden assigned her to lead under the bipartisan infrastructure bill passed last year.

Harris hosted Cabinet secretaries from the Departments of Health and Human Services, Housing and Urban Development, Agriculture, and Labor, as well as top officials from other relevant agencies for a meeting on maternal health last week to mark Black Maternal Health Week.

"This is the first time that any administration has at this level convened the Cabinet, the President's Cabinet, to address this issue as a priority not only for our administration but as a national priority," Harris said at the time.

Events this week serve as a continuation of those efforts and offer the vice president relatively low-risk opportunities to sharpen her message ahead of what's expected to be a tough midterm election for Democrats nationwide in the fall.

Harris will also host a fundraiser for the Democratic National Committee in Los Angeles on Monday in her role as a top cash procurer for her party.

The West Coast has not received the same number of trips as other places closer to Washington from Biden or Harris, another White House official noted, in part because of pandemic difficulties. That makes the trip another opportunity, they say, to "connect with a very big, important and diverse part of the country."

Biden is also set to head West this week, visiting Washington and Oregon to discuss the bipartisan infrastructure law, bringing down costs and clean energy.

But despite the focus on ways the administration has tried to help the American people, Biden has not seen a lasting bump in his approval numbers. CNN's April poll of polls -- an average of the last four national polls of Americans -- pegs Biden's approval at just 39% with 55% disapproving. Harris' national hovered around similar levels, among US registered voters, 40% approve, 56% disapprove, according to a Fox News survey conducted in late February.

Brokaw, who ran Harris' Senate campaign, said a prevailing sense of "anti-incumbent" sentiment in California and across the country, metastasized by a fatigue over high prices, are factoring into her numbers.

"I don't think poll numbers are necessarily reflective of deep, you know, long held antagonistic views towards her," Brokaw said. "I think they're just a reflection of where we are at this time, and no better way to right the ship than by going back home."