Harry Reid, a longtime US senator from Nevada and former Democratic leader, dies at 82 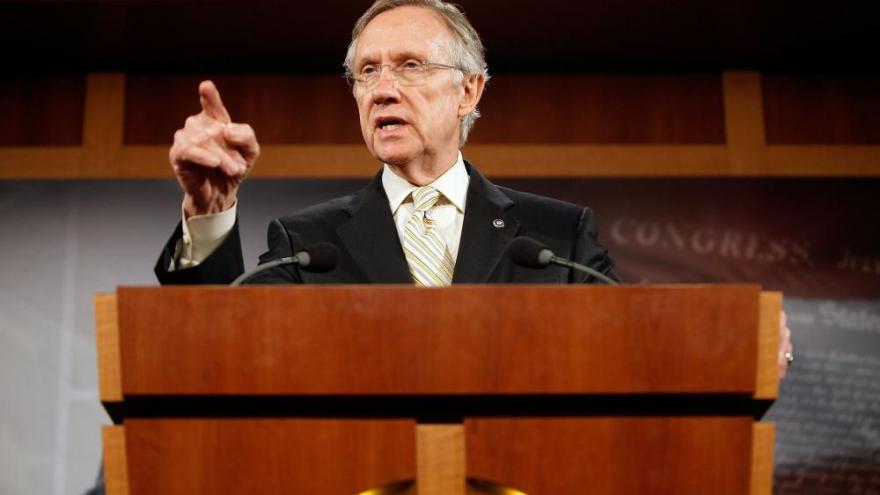 (CNN) -- Harry Reid, the scrappy former Democratic Senate leader who spearheaded epic legislative battles through three decades in Congress, has died at the age of 82, according to a statement from his wife, Landra Reid.

"I am heartbroken to announce the passing of my husband, former Senate Majority Leader Harry Reid. He died peacefully this afternoon, surrounded by our family, following a courageous, four-year battle with pancreatic cancer," she said in a statement Tuesday.

Reid rose from humble beginnings in Searchlight, Nevada, to become the most powerful politician in Nevada history, capping off his political career as the Democratic leader in the Senate, including eight years in the majority.

"He was my leader, my mentor, one of my dearest friends," Senate Majority Leader Chuck Schumer, a New York Democrat, said in a statement Tuesday evening. "He's gone but he will walk by the sides of many of us in the Senate every single day."

Former President Barack Obama released a letter he had written to Reid before his death in lieu of a statement. "I wouldn't have been president had it not been for your encouragement and support, and I wouldn't have got most of what I got done without your skill and determination," Obama wrote.

Reid underwent surgery for pancreatic cancer in 2018 and said less than a year later that he was in remission. At the time, he told CNN's Dana Bash that he felt "very good" and that he was "doing fine." But Reid responded to his cancer diagnosis with his usual bluntness, telling The New York Times in 2019: "As soon as you discover you have something on your pancreas, you're dead."

From modest beginnings to the US Senate

The beginning of Reid's life didn't hint at his political future. Born in 1939 in a modest home with no running water, his mother once earned money by doing laundry for local brothels, he wrote in his memoir, "The Good Fight," while his father worked as a hard-rock miner. He attended high school in Henderson, Nevada, often hitchhiking the 45-mile route.

A boxer in his youth, Reid later attended Utah State University before moving to Washington, DC, and working his way through law school at George Washington University by working as an officer for the United States Capitol Police.

"I think I am the only former Capitol policeman here that is a senator," Reid said in 2011. "I have such great respect for the work that they do."

After law school, Reid returned to Nevada and served as lieutenant governor from 1971 to 1975, the youngest person elected to that role in the state. After losing reelection, Reid served as chair of the Nevada Gaming Commission, a powerful position that oversees and regulates the state's casino industry. The job made Reid and his family a target of the mob: After he left that post, his wife found a bomb in the family's car, Reid wrote in his memoir.

Reid's political career grew with Nevada. When the state went from one congressional district to two after the 1980 census, Reid ran for a newly created congressional district around Las Vegas in 1982 and won the general election. He was reelected in 1984. He then successfully ran for Nevada's open Senate seat in 1986.

He rose through the leadership ranks there, serving as the chamber's Democratic whip from 1999 to 2005. From 2005 through his retirement in 2017, he served as his party's leader in the Senate, through Democrats' time in both the minority and the majority.

As the chamber's Democratic leader, Reid was a polarizing figure. Republicans argued much of the congressional gridlock stemmed from his hard-ball tactics, but Reid often reveled in playing the political bad guy -- even calling then-President George W. Bush a "loser" and a "liar." (Later, when Donald Trump was in the White House, Reid told CNN's Bash that he wished for Bush "every day.")

Reid is often blamed for deepening an era of political polarization with irascible rhetoric about Republicans and the use of controversial Senate procedures that left traditionalists worried that the consensus that once made the chamber special had vanished forever.

He brought those same tactics to electoral politics, too. During Obama's reelection bid in 2012, Reid accused Republican nominee Mitt Romney, with no evidence, of not paying his taxes. Asked by CNN in 2015 whether he regretted the attack, Reid said, "I don't regret that at all."

As much as he irked Republicans, he was often cheered by Democrats for being the last line of defense to Bush and other Republicans. He was a staunch defender of social programs and, reflecting wishes of the large Latino community back home, a proponent of immigration reform.

Reid shepherded the centerpieces of Obama's liberal political legacy into law, and he said one of his proudest accomplishments had been encouraging then-Sen. Obama to run for president.

"I did call him into my office and told him he should take a look at it. And he was stunned because I was the first one that ever suggested that to him," Reid told CNN in 2015.

"When he was reelected, (that was) one of the most moving phone calls I've ever received because he said, you know, 'You're the reason I'm here,'" Reid recalled.

Obama reiterated that sentiment in the letter he sent to Reid released Tuesday evening. "Here's what I want you to know. You were a great leader in the Senate, and early on you were more generous to me than I had any right to expect," Obama wrote.

"As different as we are, I think we both saw something of ourselves in each other - a couple of outsiders who had defied the odds and knew how to take a punch and cared about the little guy. And you know what, we made for a pretty good team," he added.

In the darkest hours of the Great Recession, Reid ushered a nearly $800 billion economic stimulus plan through the Senate despite insurmountable rows with most Republicans who said it was too expensive and racked up too much debt.

Later, he piloted the Affordable Care Act, known as Obamacare, through the Senate using a controversial budget maneuver known as reconciliation to bypass a Republican filibuster, and he told the GOP to "stop crying" about it.

In modern-day Washington, the former senator's impact is perhaps most present in his 2013 change to the Senate rules to prevent filibusters of most executive branch nominations.

He told CNN last year that he "absolutely" doesn't regret changing the rules at the time, saying: "I have no regret. It was the right thing to do. And by the way, it's not the first time the rules have been changed. They've been changed lots of times. It was time to do it again."

Broad use of the filibuster has soared in recent years in an increasingly polarized Congress. The shift prompted Reid to pen an opinion piece in the New York Times in 2019 calling for an end to the filibuster altogether.

Despite his blunt political style, Reid inspired fierce respect from many of his long-time aides, as well as fellow lawmakers -- even those across the aisle.

"I'm telling you, there is no one, no one, no one better to have in your corner than Harry Reid," Schumer said when a portrait of Reid was unveiled before he left the Senate in 2016.

Reid told CNN earlier this year that he has "a lot of respect" for John Boehner, the former Republican House speaker from Ohio with whom he sparred for years, as he reacted to excerpts of Boehner's memoir and lambasted the Republican Party's more recent "tribal" turn.

"The deal is this. John Boehner and I got a lot done, but we didn't mince words," he said.

Despite Reid's reputation as a hard bargainer with no qualms about scrapping with his opponents, he was also known as a romantic and the most influential person in his life was his wife, Landra. The two met in high school when Reid was 15. Her father was so opposed to the two dating that Reid and his would-be father-in-law got into a fist fight early in their courtship.

Reid, who was raised agnostic, told Bash in 2015 that their opposition was that they wanted their daughter to marry someone Jewish. They eloped in 1959 during college, converting to Mormonism a year later. Her parents finally came around on him.

"I am a blessed man to have this 5-foot tall woman with me all these years," said Reid.

The former Senate majority leader credited one thing for his political success over the years: Hard work.

Reid's most lasting legacy is likely to be felt in Nevada, where the senator not only remade the Western state, but turned it into a Democratic stronghold that last backed a Republican president in 2004.

"The little boy from Searchlight has been able to be part of a changing state of Nevada," he said in his farewell address in 2016.

Reid was instrumental in pushing Democrats to make Nevada one of the first nominating contests in the country, a move that focused Democratic attention in Nevada and was a catalyst to its leftward shift. He often pushed Democrats to make Nevada even more important, urging the party, because of the state's diversity, to move the state before Iowa and New Hampshire, the first two states in the nominating process.

Reid reflected on his life -- and the role he played in changing Nevada -- when he received a lifetime achievement award from the Nevada Democratic Party in 2019.

"It's a long way from Searchlight to Washington," he said. "But I didn't get there alone. I got there because of you, Nevadans."