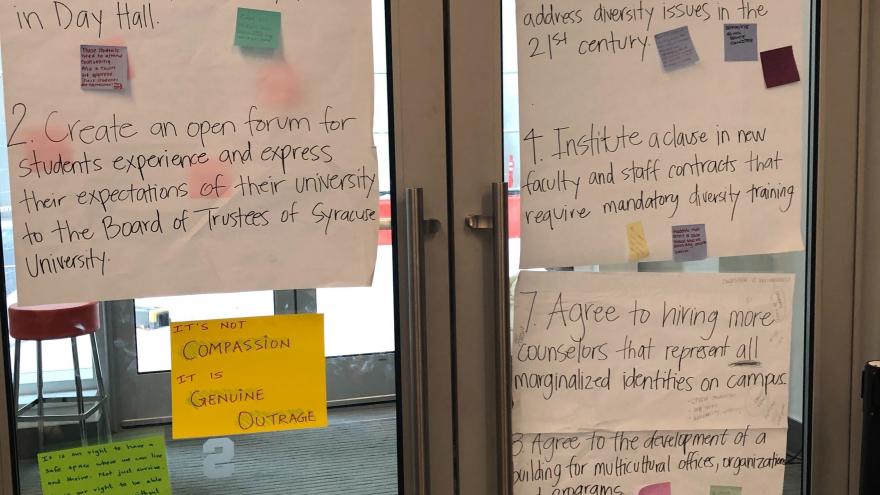 (CNN) -- A series of racist and anti-Semitic incidents have rattled college campuses nationwide as educators struggle to stop them from spreading.

This week alone, at least five incidents have been reported on college campuses hundreds of miles apart from one another.

At the University of Georgia, student Ariana Dinberg said someone tore off her historically Jewish sorority's letters from her residence hall door twice in September. At the time, she wasn't sure it was someone targeting Jews.

Later, someone wrote on the white board on her door, "All Heil" with a swastika underneath it. "They knew I was Jewish and then chose to attack me for it. It's definitely shocking to me," she said.

The University of Georgia confirmed Thursday that someone drew swastikas on placards and message boards at two campus residence halls. It's unclear who the second victim was.

University President Jere W. Morehead said the behavior has no place on the campus.

"I am appalled by such offensive and outrageous displays of hate," Morehead said in a statement to the university community.

In an email to students and faculty, the president of Iowa State University addressed the latest racist incidents reported on campus.

A swastika was etched into a door of a dormitory community room and racist stickers and posters were found on light poles and bus stop signs, President Wendy Wintersteen wrote Wednesday. The email was signed by the president and Iowa State University Police Chief Michael Newton.

"We want to again emphasize that we denounce racism, white supremacy, anti-Semitism and all bigoted rhetoric and actions," the email says. "We are appalled that people continue to spread hate on our campus."

Just last month, students gathered at the president's office to protest earlier racist incidents. They included a picture of the student government adviser in blackface and neo-Nazi writings on campus, according to the student newspaper.

A spate of racist and anti-Semitic incidents, and what students describe as the university leadership's slow response to it, have sparked protests on campus.

In addition, four students have been suspended for participating in a verbal assault directed at an African-American student last week, Chancellor Kent Syverud announced Wednesday.

The University of Wisconsin-Eau Claire is investigating five students after a string of racist social media posts from a private Snapchat discussion became public.

The posts use of an image of a burning cross at an apparent Ku Klux Klan rally and direct hateful comments at the university's black male empowerment group, according to a statement from James Schmidt, the school's Chancellor.

"I want to personally condemn the social media posts. They were despicable and disgusting," he said in the statement.

The messages were discovered by school officials on Twitter organically, not reported by students to officials or police, assistant chancellor Michael Rindo said.

The student group targeted by the messages said it was appalled.

"This group was designed to help change the perception of African American males on a predominantly white campus," its statement said. "It is very disturbing to see the backlash we get from the people in our own backyard," the statement adds.

Additionally, the five students were suspended from the football team pending the outcome of formal investigation. Their names have not yet been released.

Auburn University: A noose in a residence hall

An extension cord tied as a noose was left Wednesday in the common area of campus residence hall, Auburn University's Department of Campus Safety & Security announced on social media. The noose was "quickly removed."

"A noose is linked to racial violence in our nation. Intolerance, intimidation and threatening behavior have no place on Auburn's campus. We condemn this action as antithetical to the values of the Auburn Family," the department tweeted Wednesday.

The individual responsible was identified Friday, though the school did not release a name or reveal whether the person was a student. The school does not comment on individual conduct matters, the school said.