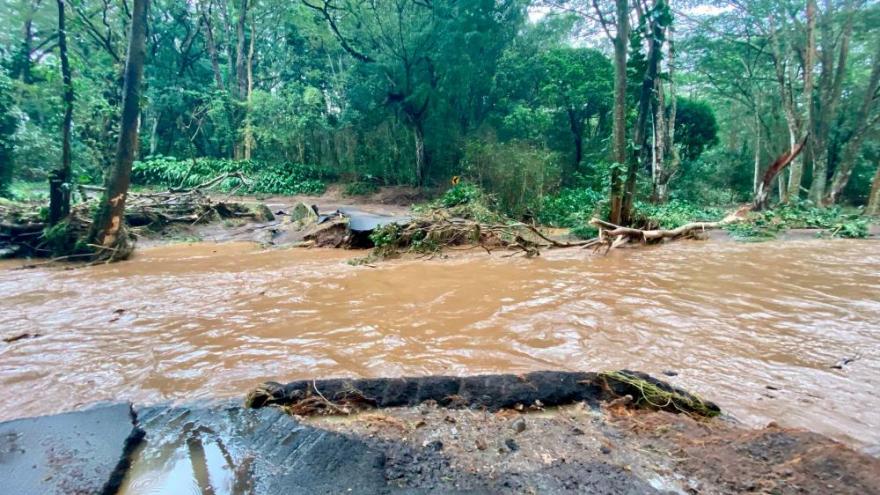 The state of Hawaii is under an emergency proclamation as the state struggles with widespread damage from flooding.

(CNN) -- The state of Hawaii is under an emergency proclamation as the state struggles with widespread damage from flooding.

Gov. David Ige signed the proclamation Tuesday to free up state funds to assist those impacted by the heavy rains and flooding that has reached all islands, according to a post on Twitter.

The severe weather is expected to continue through Friday, but residents are already reporting widespread damage.

At least half a dozen homes on the island of Maui were reported to have been heavily damaged or destroyed. And two bridges in Wong's Village, Oahu crumbled as a cement truck drove over it, according to CNN affiliate KGMB. Residents say the floodwaters from the stream below had almost reached the road on the bridge when it gave out.

Maui resident Mark Alexander said he found himself with water up to his chest in a matter of minutes at his home in Haiku. The family's dog, Legend, was swept away by the water, but found a way to climb out and onto the roof of the home for safety, KGMB reported.

The floodwaters were so furious they knocked his daughter's bedroom off the foundation, Alexander told the outlet, as he with family members and friends began shoveling feet of mud out of their home.

The entire state is under a flash flood watch until 6 a.m. local time Wednesday.

The mayor of Maui says homes and bridges have been severely damaged in the community's ongoing flooding emergency. "This has been unprecedented flooding, and we will be making damage assessments today," Mayor Michael Victorino said in a written statement Tuesday.

On Monday, Victorino said that residents told him it was the worst flooding they've seen in over 25 years.

For a time, officials worried about water cresting over the Kaupakalua Dam in Haiku and ordered residents downstream to evacuate.

On Tuesday, a flash flood emergency was also issued for Haleiwa, on the north shores of Oahu in Honolulu county 6:15 p.m. HST, according to National Weather Service, and the community was ordered to evacuate.

Oahu Emergency Management issued a flash-flood advisory that could lead to life-threatening catastrophic flooding in Oahu until 9:30 p.m. Wednesday and residents were warned to move to higher ground, according to an emergency alert issued by the City and County of Honolulu. County officials identified short-term evacuation sites for residents affected by the flooding on the North Shore.

"My caution to anyone watching is please heed that warning and evacuate. We don't do those kind of orders capriciously, we do those with purpose, they are most serious," Mayor of the City and County of Honolulu Rick Blangiardi said in a video address on Tuesday.

Meantime, assessments of the damage in Maui also started Tuesday.

"When you see flood damage in the light of day, it's a reminder of the sheer power of fast-moving water," said Victorino, who visited flooded areas. "We are so fortunate there were no reported deaths or injuries. I want to publicly thank our first responders who did heroic work under very dangerous conditions."

The mayor said the flooding had wiped out Peahi Bridge and at one time power was knocked out for more than 1,300 customers.

The Maui Fire Department reported it received more than a dozen calls for help from residents who were trapped in their homes because of rising floodwaters, according to an update from the County of Maui.

On Monday, Ana Paula DeCarlo told CNN her family was stuck at home due to the roadway washing out. She recorded video that showed water rushing over the roadway that used to have a small stream under it.

"Yes, it's like a bridge, small one over a stream," she said of the road. "It hasn't stopped raining one second. We are about 15 minutes away from the dam."

"This is our street right now. We can't go anywhere. The street disappeared, it's gone!," she posted on Instagram.