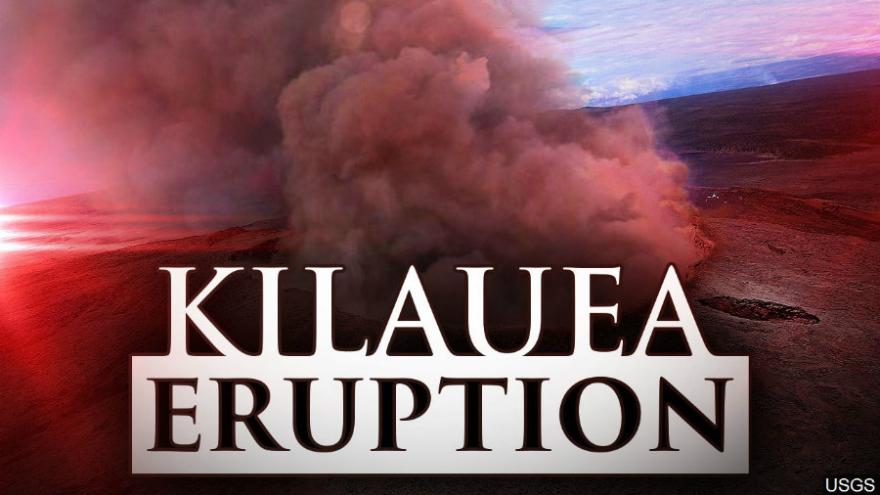 (CNN) -- At least 9 homes have been destroyed after the Kilauea volcano on Hawaii's Big Island erupted, spewing molten rocks and high levels of sulfur dioxide into neighborhoods.

The eruption drove hundreds of people from their homes Thursday. It was followed by a magnitude 6.9-magnitude quake Friday -- the most powerful on the island since 1975, the US Geological Survey said.

At least eight volcanic vents have opened in Leilani Estates, according to the USGS.

All residents of Leilani Estates, a community of about 1,700 people near the Big Island's eastern edge, and nearby Lanipuna Gardens have been ordered to evacuate.

"The area continues to be unstable with volcanic venting and related hazards of earthquake and poisonous gases ongoing," the Hawaii Civil Defense Agency said Saturday night.

New photos released by the USGS showed a wall of molten lava from the seventh fissure in Leilani Estates and a new crack in one of the subdivision's roads.

"Vents continue to open up, so we lost a few more structures," he said. "I'm pretty happy that we did evacuated the whole neighborhood and unfortunately some people are still in there and we need to get them out. The gases are still high."

Magno said authorities are working on a plan that would allow residents temporarily back in to retrieve additional belongings if conditions allowed.

The Hawaii Volcanoes National Park said on Twitter Saturday that "if volcanic and seismic activity remain at current levels," some areas of the park could reopen Sunday afternoon.

Timothy Trun was among a dozen who evacuated from his farm Thursday as he and others were about to sit down to a goodbye dinner for a friend.

"It's been a real shocker," he told CNN on Saturday. "We're about to enjoy eating dinner, and the cops show up and tell us you have to go, and everything changes in an instant. You have five minutes to pack your bags with what you think you're going to need and you're off."

Neil Valentine and his family also left their home Thursday night in Leilani Estates. He later saw a video on social media showing lava splashing and bubbling a few feet from his home, he told CNN affiliate KITV.

"Just basically heartbreak," he said of the scene. "My wife and I have been married going on 26 years. It was pretty much our dream home that we've been looking for all this time. Just knowing that we're not going to have a house, my wife is still in tears."

Harry Kim, mayor of Hawaii County, said the government will support residents who want to go back to their homes to pick up some belongings.

Cracks in Kilauea volcano's rift zone -- an area of fissures miles away from the summit -- erupted Thursday and early Friday, spurting lava near the island's eastern edge.

Sulfur gas levels in some areas are too high, which can be life-threatening, according to the federal Agency for Toxic Substances and Disease Registry.

Volcanic eruptions can release the gaseous compound, and Hawaiian fire department personnel have detected high levels of it in the evacuation area, the civil defense agency said.

Breathing large amounts of sulfur dioxide can result in burning of the nose and throat, and breathing difficulties. Senior citizens, the young and people with respiratory issues are especially vulnerable to the gas, the state's Emergency Management Agency said.

"The officers and firefighters that were out there on the first night, the gasses were really high," he told the affiliate. "Usually it's not long lasting. You can recover from it, but they went home with headaches and so forth, but that's part of the exposure."