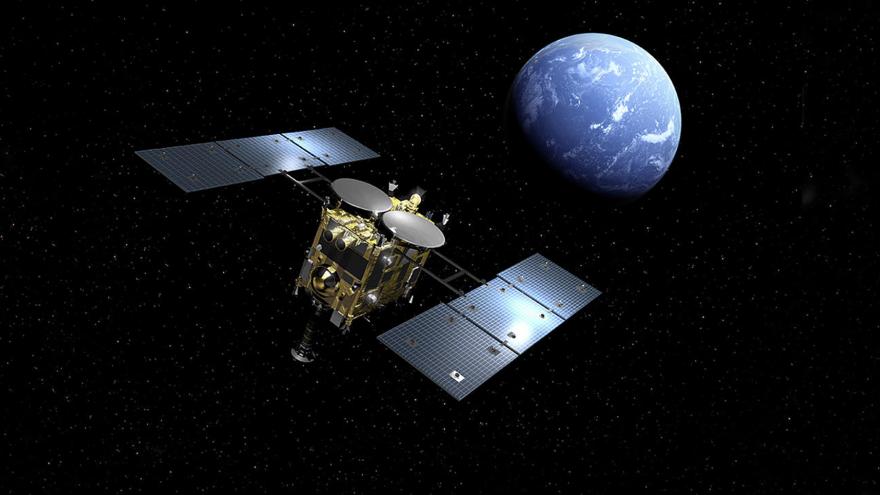 (CNN) -- The first sample collected from material beneath the surface of an asteroid has landed on Earth.

The Japan Aerospace Exploration Agency's Hayabusa2 mission dropped off its sample collection capsule before moving on to the next part of its extended mission: visiting more asteroids.

The capsule appeared like a small fireball streaking across the early morning sky of the Australian outback Sunday as it re-entered Earth's atmosphere. The fireball was witnessed about 12:30 p.m. ET Saturday -- 4:30 a.m. Australian time Sunday.

The mission team used the capsule's beacon to estimate its landing site and searched for it using a helicopter.

They located it in the projected landing site, along with the parachute, around 2:47 p.m. ET. The capsule has been collected and moved inside the team's temporary "headquarters" in Woomera.

Hayabusa2 launched on December 3, 2014, and arrived at the near-Earth asteroid Ryugu in June 2018. The spacecraft collected one sample from the asteroid's surface on February 22, 2019, then fired a copper "bullet" into the asteroid to create a 33-foot wide impact crater. A sample was collected from this crater on July 11, 2019.

Then, Hayabusa2 departed the asteroid in November 2019 and journeyed back to Earth.

Altogether, the mission's science team believes 1 gram of material was collected, but they can't be sure until they open it.

"One gram may sound small, but for us, one gram is huge," said Masaki Fujimoto, deputy director general of the department of solar system sciences at JAXA, during an online briefing hosted by the Australian Science Media Centre. "It is enough to address our science questions."

The agency's first Hayabusa mission returned samples from the asteroid Itokawa to Earth in June 2010, but scientists said that due to failure of the spacecraft's sampling device, they were only able to retrieve micrograms of dust from the asteroid.

"Ryugu is linked to the process that made our planet habitable," Fujimoto said. "Earth was born dry; it didn't begin with water. We think distant bodies like Ryugu came to the inner part of solar system, hit Earth, delivered water and made it habitable. That's the fundamental question we're after and we need samples to solve that."

Since Hayabusa2 isn't returning to Earth, it ejected the 35-pound sample return capsule as it swung by our planet at a distance of 136,701 miles. Then, the spacecraft changed its course to travel beyond Earth and move along with its extended mission.

Imagery helped confirm separation of the capsule of from the spacecraft.

The Australian government granted JAXA permission to land its capsule in the Woomera Prohibited Area in South Australia. This remote area is used by Australia's Department of Defence for testing.

The Japanese space agency previously used this site for the Hayabusa landing in 2010. Its partnership with Australia, the large, flat and open nature of the land and the fact that the team can quickly move the sample from Australia to Japan appealed to JAXA.

The large landing zone stretches 124 miles north to south and 62 miles east to west. The agency designated this large area to compensate for any uncertainty created by local wind speed when the capsule deploys its parachute.

Once the capsule was located, a helicopter will took the sample team scientists to the landing site so they could collect it. The capsule will be placed in a protective box, and they will bring it back to headquarters, a temporary facility they built.

This clean room will allow the team to check the capsule and allow for degassing. It's possible that the capsule collected gases from the asteroid -- which are likely emitted by the sample the spacecraft collected. Any detection of gas in the gas sample container is a good sign they successfully collected a sample of material from the asteroid.

An official announcement about the amount of material collected from the asteroid will be made once the samples are returned to Japan and opened, Fujimoto said.

Hayabusa2 will fly by three asteroids between 2026 and 2031, eventually reaching the rapidly rotating micro-asteroid 1998 KY26 in July 2031 millions of miles from Earth. It will be the first flyby of this type of asteroid.

What's in an asteroid sample?

Asteroids are like leftovers from the formation of our solar system, preserving information about the origins of planets as well as the vital elements that allow life to exist on Earth.

Ryugu is shaped like a diamond and is just over half a mile in diameter.

"I anticipate that the Hayabusa2 samples of asteroid Ryugu will be very similar to the meteorite that fell in Australia near Murchison, Victoria, more than 50 years ago," said Trevor Ireland, professor in the Australian National University Research School of Earth Sciences and a member of the Hayabusa2 science team in Woomera, in a statement.

"The Murchison meteorite opened a window on the origin of organics on Earth because these rocks were found to contain simple amino acids as well as abundant water. We will examine whether Ryugu is a potential source of organic matter and water on Earth when the solar system was forming and whether these still remain intact on the asteroid."

Ryugu is also a near-Earth asteroid that has an orbit that takes it between Earth and Mars. It will make a close approach to Earth in December 2076. Understanding these potentially hazardous asteroids could enable planning by space agencies for how to deflect them.

The NASA OSIRIS-REx mission recently collected a sample from another near-Earth asteroid, Bennu, that is similar in composition to Ryugu. In fact, based on early data from both missions, scientists working on both missions believe it's possible these two asteroids once belonged to the same larger parent body before it was broken apart by an impact.

The Bennu sample will be returned to Earth by 2023.

Patrick Michel, director of research at the French National Centre for Scientific Research in Paris, is an investigator for both missions.

"It is really important to realize that no two asteroids are the same," Michel told CNN in October. "Even if Bennu and Ryugu share some intriguing similarities and belong to the same category (primitive), they also have some very interesting differences. And these samples will occupy generations of researchers as a large amount will be kept for future generations that will benefit from the increase in technology and accuracy of the instruments used to analyze them."