'Healthy debate,' but no breakthroughs in Biden's critical talks with China's Xi Jinping 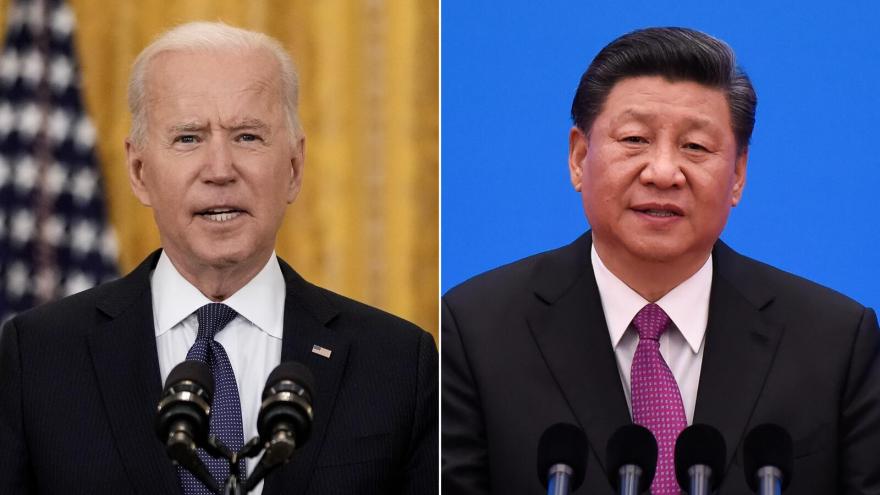 US President Joe Biden and Chinese President Xi Jinping will meet Monday for a virtual summit.

(CNN) -- When Chinese President Xi Jinping beamed into the White House on Monday evening for a virtual summit with President Joe Biden, the two men needed no introduction.

"We've spent an awful lot of time talking to one another, and I hope we can have a candid conversation tonight as well," Biden said as the talks got underway, sitting at the head of the Roosevelt Room table as Xi's visage was broadcast on a pair of television screens.

From his seat in a cavernous room inside the Great Hall of the People in Beijing, Xi was just as friendly.

"Although it's not as good as a face-to-face meeting," Xi said as the summit got underway, "I'm very happy to see my old friend."

It was an auspicious start to some of the most critical talks of Biden's presidency, given the deteriorating ties between Washington and Beijing and the reality, acknowledged by administration officials, that managing the US relationship with China will amount to Biden's most critical international objective.

The affable greetings eventually turned more serious as Biden raised concerns about human rights, Chinese aggression toward Taiwan and trade issues. Throughout, the leaders engaged in a "healthy debate," according to a senior administration official present for the discussions.

Officials said the three-and-a-half hour summit, which stretched longer than planned, allowed the two men ample opportunity to diverge from their prepared talking points. The tone remained "respectful and straightforward," the officials said.

But the highly anticipated summit yielded no major breakthroughs -- none were expected ahead of time -- and officials dismissed the notion the summit was intended to ease what has become an increasingly tense relationship.

"I don't think the purpose was particularly to ease tensions, or that that was the result. We want to make sure the competition is responsibly managed, that we have ways to do that. The President's been quite clear he's going to engage in that stiff competition," the senior administration official said afterward.

Biden is fond of citing the dozens of hours and thousands of miles he clocked with Xi when both were serving as their country's vice presidents. He's claimed to have spent more time with the Chinese president than any other world leader.

But things have changed since Biden, as he likes to recall, was dining with Xi on the Tibetan Plateau and describing the United States in one word: "possibilities."

Now, the world's two largest economies are engaged in fierce tensions on trade, military aggression and human rights. And Biden, who initiated Monday evening's virtual summit, finds himself in a high-wire act with China's most powerful leader in decades.

During the summit, each man recounted stories from their time traveling with each other, sometimes quoting each other's words from that era, the senior administration official said.

As the talks were getting underway, Biden said he was expecting to discuss a wide-ranging and substantive agenda.

"As I've said before, it seems to me our responsibility as leaders of China and the United States is to ensure the competition between our two countries does not veer into conflict, either intended or unintended. Just simply straightforward competition," he said, speaking to Xi through a translator.

"It seems to me we have to establish some common sense guardrails, to be clear and honest where we disagree and work together where our interests intersect," Biden went on, asking to communicate "honestly and directly" over the range of topics up for discussion.

"We never walk away wondering what the other man is thinking," he said.

Afterward, the White House said Biden raised concerns about human rights abuses against the Uyghur minority in the western Xinjiang Provence and in Tibet.

Taiwan, which has been a source of increased tension in recent months, was a topic of extensive discussion during the summit. Biden stressed the importance of the "One China" policy, and was direct in his concerns about Chinese behavior that threatens stability in the Taiwan strait. But he did not set any of the new "guardrails" referenced at the start of the talks.

On Covid-19, Biden reaffirmed the importance of transparency in preventing future outbreaks of disease, a nod to China's unwillingness to allow an international investigation into the origins of the current pandemic.

And he raised areas where the US and China can cooperate, including on climate change. The two countries recently surprised observers at the COP26 climate talks in Scotland with a joint pledge to cut emissions.

After speculation Xi might use the meeting to invite Biden to the upcoming Beijing Winter Olympics, officials said the topic did not arise.

White House officials had hoped a large South Lawn signing ceremony for a massive new public works package, which occurred a few hours before Biden's virtual summit, would help signal progress on the main underpinning of his foreign policy: proving democracies can deliver more effectively than autocracies like China. He planned to detail the new infrastructure package to Xi.

The fact the bill was passed with help from some Republicans -- fulfilling Biden's promise to work across party lines -- helps sustain his pledge to prove democracies can work, according to the officials.

Yet he still entered the talks at a politically weakened moment. His party fared poorly in off-year elections this month in Virginia, and polls continue to show his approval rating at some of the lowest levels of his presidency.

That is in sharp contrast to Xi, whose consolidation of power in China was cemented last week when the Chinese Communist Party adopted a landmark resolution elevating him in stature to his two most powerful predecessors -- Mao Zedong and Deng Xiaoping. Officials said the upgrading of Xi's status only enhanced the imperative of a face-to-face with Biden.

Nearly every issue Biden is focused on, domestically and internationally, has a nexus to China. Supply chain issues that are driving inflation at home can be traced in part to shortages in Chinese plants. Combatting climate change requires buy-in from Xi, who has shown some willingness to partner with Biden on the issue. Managing global trouble-spots like North Korea and Iran each involves coordination with Beijing.

Biden is a fan of in-person meetings and complained early in his presidency that virtual summits -- where foreign leaders are patched in on video screens -- could not replicate the chemistry of sitting face-to-face. American officials say leader-to-leader meetings are even more important with Xi, whose inner circle has become smaller and smaller and who now wields a historic level of power.

Over the summer, aides were hopeful of setting up a meeting between the two men on the sidelines of this year's Group of 20 summit in Rome. But Xi has not left China in nearly two years, partly over Covid-19 concerns. So Biden settled on a virtual summit instead as a way to advance his two previous phone conversations with Xi.

"There is something different about actually seeing someone physically, about the depth of the conversation you can have, versus just on a regular phone line," the senior administration official said earlier, describing different ways of preparing for a video conference compared to just a phone conversation.