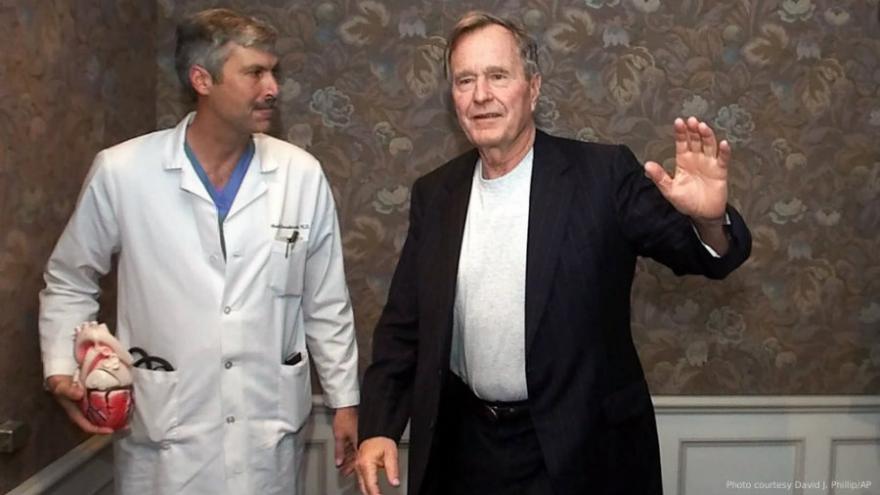 Hausknecht, 65, was biking north when he passed the shooter going in the other direction, Finner said. The shooter turned, fired two shots at Hausknecht and rode away on his bike, Finner said.

Hausknecht was taken to a hospital, where he was pronounced dead, Finner said.

Finner said investigators didn't know if the shooting was targeted, random or caused by road rage. He said a few people witnessed the shooting and video may become available.

In an updated description, the suspect is said to be a white or Hispanic male, about 30 years old, wearing a tan baseball cap, gray warmup jacket, khaki shorts and riding a light-colored mountain bike bicycle.

Jim McGrath, spokesman for the 94-year-old former President, issued this statement: "President George HW Bush was deeply saddened by the tragic circumstances surrounding the untimely passing of Dr. Mark Hausknecht, and 41 sends his most sincere condolences to the Hausknecht family, his colleagues at Houston Methodist, and his friends."

"Mark was a fantastic cardiologist and a good man," President Bush said in the statement. "I will always be grateful for his exceptional, compassionate care. His family is in our prayers."

"I'm very sorry to inform you that Dr. Mark Hausknecht, a cardiologist who was an important member of the Houston Methodist staff and the DeBakey Heart & Vascular Center, was tragically shot and killed this morning while riding his bicycle to work. Mark was a leader in the Houston Cardiovascular Associates and specialized in cardiovascular disease. He received his medical degree from Baylor College of Medicine and completed his residency and fellowship at The John Hopkins Hospital. He is a longtime Houston Methodist-affiliated physician and has been in practice for almost four decades."