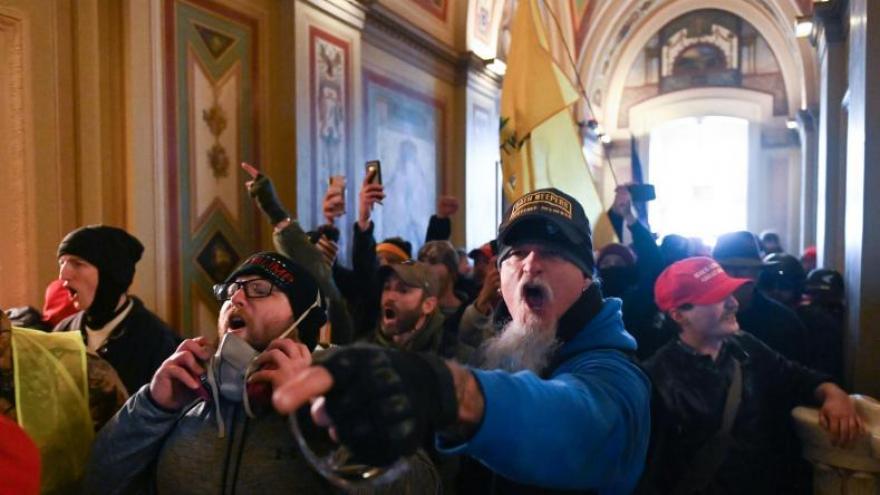 A man wearing an Oath Keepers hat yells in the hallways of the Capitol during the invasion by rioters on January 6.

(CNN) -- A heavy metal guitarist with ties to the Oath Keepers pleaded guilty Friday to two crimes related to the US Capitol insurrection, making him the first rioter to do so.

Jon Ryan Schaffer pleaded guilty to obstruction of an official proceeding and entering a building with a dangerous weapon. He admitted to carrying bear spray into the Capitol complex during the formal certification of the Electoral College votes.

One hundred days after the January 6 attack, Schaffer is now the first pro-Trump rioter to plead guilty and admit his crimes.

In his plea deal, Schaffer is described as a "founding lifetime member" of the Oath Keepers, though his lawyers previously claimed in court that he didn't know much about the paramilitary group.

As part of the deal, Schaffer also "admits his belief that the Electoral College results were fraudulent is not a legal justification" for storming the Capitol complex.

Prosecutors and Schaffer's attorneys agreed to recommend that he get between 3.5 and 4.5 years in prison, based on how fruitful his cooperation is with the government. The sentencing decision will ultimately be made by federal Judge Amit Mehta, who is overseeing the case.

Many of the Capitol riot defendants have expressed interest in pleading guilty and attempting to move on with their lives. But those plea deals -- and potential cooperation deals -- have been slowed down while prosecutors waited for sign-off from senior Justice Department officials.

Schaffer's plea was made official during a hastily arranged hearing Friday in DC District Court.

As part of the plea deal, Schaffer agreed to cooperate with investigators and potentially testify in related criminal cases, according to the court proceedings. In return for Schaffer's assistance, the Justice Department might later urge the judge to show leniency during his sentencing.

Investigators likely asked for information about the Oath Keepers, the far-right paramilitary group with a dozen members facing conspiracy charges. Schaffer wore an "Oath Keepers Lifetime Member" hat inside the Capitol, but his defense attorneys said he bought the hat from a fan.

Some laws being used against Capitol rioters have never been used like they are now, to target individual members of a mob on federal grounds. Some defendants are disputing the Justice Department's interpretation of these laws, and Mehta alluded to potential "legal challenges down the road" while questioning prosecutors about the specifics of Schaffer's landmark plea.

Schaffer was initially charged with six federal crimes. He was ordered to stay in jail while his case moved through the court system, because a magistrate judge was alarmed by his potential ties to Oath Keepers extremists and by the fact that he brought bear spray inside the Capitol.

Some members of his Indiana-based band reportedly quit in protest of his role in the attack.

The Justice Department heralded the guilty plea on the 100-day mark of the Capitol attack.

"The FBI has made an average of more than four arrests a day, seven days a week since January 6th," acting Deputy Attorney General John Carlin said in a statement on Friday. "I commend the hundreds of special agents, prosecutors and support staff that have worked tirelessly for the last 100 days to bring those who committed criminal acts to justice."

This story has been updated with details of the plea agreement.