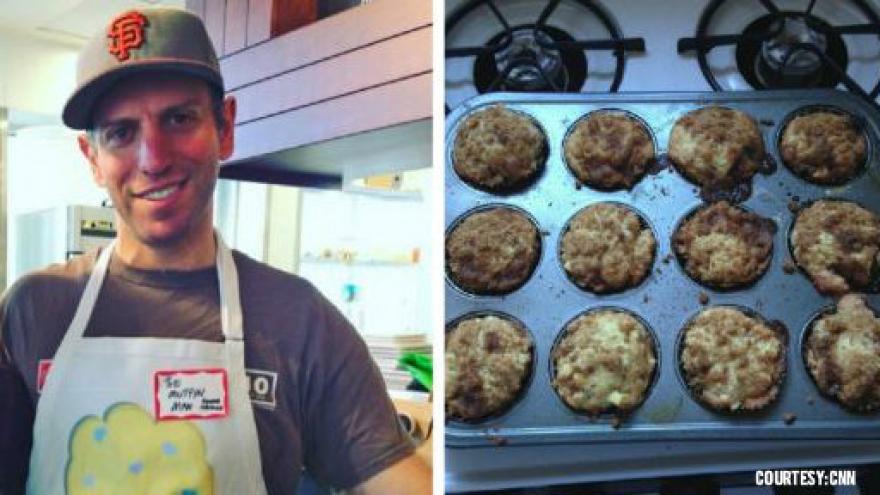 (CNN) -- When Jacob Kaufman first stumbled upon the art of muffin baking, he never imagined he'd turn into the "Muffin Man."

"I was just looking for a easy breakfast for my mornings before work," Kaufman told CNN.

It was sundown after Yom Kippur, and Kaufman was standing in his uncle's kitchen watching him whip up a creamy, muffin batter. Kaufman had never made muffins before, so he decided to give it a try. He found a recipe online, and voila. A dozen apple cinnamon muffins were made.

Later, as he walked down the streets of San Francisco, he noticed a few people who were homeless and offered some of his muffins.

The second week, he made two dozen. By the time he made it to work, Kaufman was out of muffins.

"It wasn't so much that more people were becoming homeless, but I was training myself to see more homeless people," he said. "Most of the time, you train yourself almost not to see homeless people. It's unsightly. It's uncomfortable."

But Kaufman understood that he was giving these people more than just muffins. He was acknowledging them as people worthy of our attention.

"Actually handing them the muffins was the most important, special part because it gave us a time to connect," he said.

Fast forward five years, and Kaufman, 36, on his own has baked more than 4,500 muffins.

And along the way, he's met some new friends, like 34-year-old Julia Levy, who heard about Kaufman's story and wanted to get involved -- even if she was on the East Coast in New York.

Together, through several FaceTime video chats and long text message threads, Kaufman and Levy created National Muffin Day, which falls on January 28 this year. Since 2015, they've encouraged people around the country to bake muffins for the homeless people in their community.

With the hashtag #givemuffins, Kaufman and Levy tally the number of bakers participating. They first started with 72 bakers, then 115 and last year inching up to 161 bakers.

Beyond their families and friends, others are stepping up to bake - even Caribou Coffee & Einstein Bros.

Caribou's CEO Sarah Spiegel and former "Food Network Star" top finalist Emma Frisch told CNN they plan on baking at home. More than 15 cities are hosting baking parties -- from Atlanta to Seattle -- and the list continues to grow. Based on their records from years' past, Kaufman and Levy hope to have at least 200 bakers.

For every person who bakes and gives, Kaufman, his parents and his former law firm will donate $30 to Project Homeless Connect, a San Francisco organization for the homeless.

Levy and Kaufman insist that the muffin fun doesn't have to stop once National Muffin Day is over. If anything, they hope the day inspires them to pursue bigger ambitions.

For Levy, she has dreams of her and Kaufman making a cookbook with some of their favorite muffins recipes and maybe one day having their own cooking show, reminding people that philanthropy doesn't have to be giving money. It can be something special -- like a muffin.

"This is more than just muffins," she said. "We're educating people about homelessness. Watching my friends teach their kids about nutrition and how to bake. It's beautiful."