Here are the 2020 Democratic candidates who qualify for CNN's debate 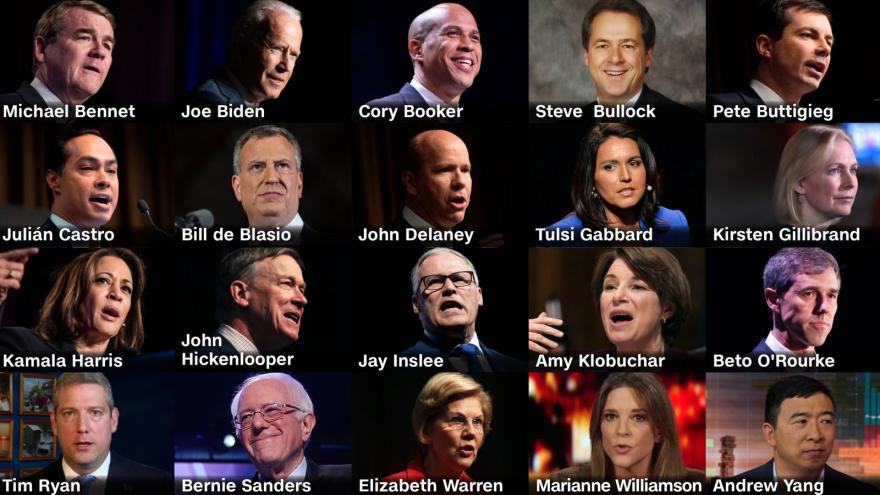 (CNN) -- The field is set for CNN's Democratic primary debates later this month.

CNN will conduct a live, random drawing to determine the candidate lineup for each night. The drawing will air on Thursday at 8 p.m. ET during a special edition of Anderson Cooper 360.

The only change to the pool of qualifying candidates is that Bullock, a candidate who was left out of the first Democratic debates in June, will now be on the stage, replacing California Rep. Eric Swalwell, who dropped out earlier this month.

Massachusetts Rep. Seth Moulton and Miramar, Florida, Mayor Wayne Messam, two candidates who did not make the first debate stage, will also miss the second debate after failing to qualify.

Billionaire investor Tom Steyer and former Pennsylvania Rep. Joe Sestak, two candidates who recently got into the presidential contest, also failed to qualify for the second round of debates.

Candidates had until 11 a.m. ET Wednesday to certify with the DNC that they have either achieved at least 1% support in three polls from an approved list of pollsters or received campaign contributions from 65,000 unique donors, including 200 donors each from 20 different states.

But based on public information, it had been clear for days that Moulton, Messam, Steyer and Sestak were the four candidates likely to miss the debate stage.

Bullock publicly complained about the DNC before the first debate, arguing that he was being penalized for doing his job as governor of Montana, something that kept him from announcing a 2020 bid earlier. Now, Bullock is celebrating that he will make the second contest.

"I'm going to be in the second debate in two weeks," Bullock said Wednesday morning on MSNBC. "I'm really excited about it."

Moulton's campaign complained to the DNC on Wednesday about the thresholds set to determine who makes the debate stage.

"The online donor debate qualification is an important measure of the strength of a campaign, but so is longevity -- and we believe our fundraising numbers are evidence of our staying power in this race," Marie Harf, a Moulton aide, wrote in a letter to DNC Chairman Tom Perez. The letter noted that Moulton out-raised de Blasio, Delaney, Hickenlooper, Ryan and Swalwell, all of whom made the first debate stage.

Moulton has not announced what he will do when all of the other candidates are at the debate. For the Miami contest, Moulton traveled to the city for the media exposure.

Evan O'Connell, a Sestak spokesman, said the campaign is confident in its strategy and is "now building up the online and offline media operation and aiming for the 5+ Fall debates."

And Steyer's campaign brushed off the fact that they missed the debate stage, since they got into the race this month.

"Given that we entered the race just days before the deadline, we never expected to make the July debates. Since launching the campaign, our focus has been qualifying for the September debates in Houston. We are confident that Tom will be on that stage," Steyer spokesman Alberto Lammers said.