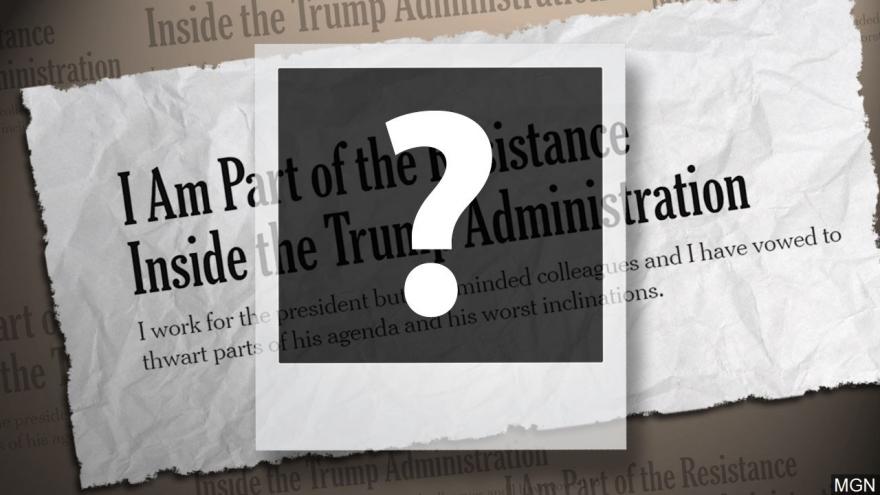 (CNN) -- The highest-ranking officials in the Trump administration are publicly denying they or their offices authored the infamous anonymous op-ed in The New York Times, an indication of how deeply the episode has shaken the White House.

Among the officials to speak out are Vice President Mike Pence, Secretary of State Mike Pompeo, Director of National Intelligence Dan Coats and Defense Secretary James Mattis. The op-ed is written by a senior Trump administration official who says they are part of an internal "resistance" working to thwart parts of Trump's agenda and block his worst impulses, and was published amid questions of President Donald Trump's fitness and his control over his administration.

Trump loves a strongly worded denial, and he is closely watching the string of statements, a top White House official tells CNN, adding that they are being printed out and delivered to the President as they come in.

The official added that there has not been a formal request for the statements, but by this point in the administration, Cabinet members are well aware of how he appreciates these messages of support. On Wednesday, Trump praised Mattis and chief of staff John Kelly for strongly pushing back against assertions in Bob Woodward's book that they were critical of the President.

A US official who works in an agency that issued a denial said there was no real internal debate or perceived downside over issuing a statement.

An administration official said White House aides were struggling Thursday morning to get ahead of the op-ed as the Cabinet and other top officials were releasing their own statements. The official said the White House "wanted a more coordinated response."

The essay prompted a hunt in the White House, with the President intent on knowing who wrote the words he suggested could be treasonous, one administration official told CNN.

Aides are following leads based on the way the op-ed is written, looking at key words used in the editorial that stand out, according to a source close to the White House.

Despite the internal interest and the President's demand to smoke out the author, White House press secretary Sarah Sanders on Thursday slammed the media's "wild obsession" with figuring out the identity. She also blamed the newspaper's opinion desk for being "complicit in this deceitful act" from a "gutless loser."

"The media's wild obsession with the identity of the anonymous coward is recklessly tarnishing the reputation of thousands of great Americans who proudly serve our country and work for President Trump. Stop," Sanders tweeted.

In the wake of the op-ed's publication, speculation arose online that it could be someone in Pence's office -- or Pence himself -- who wrote it, given the op-ed's inclusion of the word "lodestar" and several speeches Pence gave using the unusual term. In the op-ed, the official also claimed there were "early whispers within" Trump's Cabinet of invoking the 25th Amendment, which would require a majority of Cabinet officials to declare to Congress they believe the President is "unable to discharge the powers and duties of his office" and thus leave the vice president in charge.

"The Vice President puts his name on his Op-Eds. The (New York Times) should be ashamed and so should the person who wrote the false, illogical, and gutless op-ed. Our office is above such amateur acts," Pence's deputy chief of staff and communications director Jarrod Agen tweeted Thursday.

Taking questions from reporters in India, Pompeo said the op-ed is "not mine." He also suggested that the author should quit their job instead of staying to "undermine what President Trump and this administration are trying to do."

The op-ed coincided with details being reported from Woodward's new book "Fear: Trump in the White House," in which Mattis is quoted as saying Trump has the understanding of a "fifth- or sixth-grader." Mattis personally denied the quotes attributed to him, saying they were "a product of someone's rich imagination."

Asked if Mattis wrote the essay, Pentagon spokesperson Dana White told CNN, "It was not his op-ed."

Attorney General Jeff Sessions: A Justice Department spokesman told CNN that Sessions was not the author.

Treasury Secretary Steve Mnuchin: ".@stevenmnuchin1 is honored to serve @POTUS & the American people. He feels it was irresponsible for @nytimes to print this anonymous piece. Now, dignified public servants are forced to deny being the source. It is laughable to think this could come from the Secretary," tweeted Tony Sayegh Jr., a spokesman for the department.

Director of National Intelligence Dan Coats: "From the beginning of our tenure, we have insisted that the entire (intelligence community) remain focused on our mission to provide the President and policymakers with the best intelligence possible," Coats said in a statement, adding that any speculation that he or his principal deputy Sue Gordon wrote the op-ed is "patently false."

Homeland Security Secretary Kirstjen Nielsen: "Secretary Nielsen is focused on leading the men and women of DHS and protecting the homeland -- not writing anonymous and false opinion pieces for the New York Times. These types of political attacks are beneath the Secretary and the Department's mission," the agency's press secretary Tyler Q. Houlton said in a statement.

Department of Housing and Urban Development Secretary Ben Carson: HUD spokesman Raffi Williams told CNN that Carson "didn't write the op-ed" and also denied writing the piece himself. Williams said he has not gone around asking other officials in the department but doubts it would be someone else at HUD.

US Ambassador to the UN Nikki Haley: In response to a CNN question about whether she wrote the op-ed, Haley said, "no."

Secretary of Agriculture Sonny Perdue: Asked if Perdue was the author, Tim Murtaugh, a department spokesman, said "no" and referred to Sanders' tweet lambasting the media.

Labor Department Secretary Alexander Acosta: "The Secretary does not play these sophomoric Washington games. He is definitely not the author," a Department of Labor spokesperson told CNN.

Director of the Office of Management and Budget Mick Mulvaney: Spokespersons for the OMB and Consumer Financial Protection Bureau both denied that Mulvaney wrote the Times op-ed.

Environmental Protection Agency Administrator Andrew Wheeler: "That's a no ... Acting Administrator Wheeler supports President Trump 100% and is honored to serve in his Cabinet. He also believes whoever wrote the op-ed should resign," spokesman John Konkus said.

CIA Director Gina Haspel: "No," agency spokesperson Timothy Barrett told CNN when asked if Haspel was behind it.

Transportation Secretary Elaine Chao: "For those who have inquired, this is to confirm that Secretary Chao is not the author of the op-ed," Marianne McInerney, a spokeswoman for the department, said.

Energy Secretary Rick Perry: "I am not the author of the New York Times OpEd, nor do I agree with its characterizations," Perry tweeted. "Hiding behind anonymity and smearing the President of the United States does not make you an 'unsung hero', it makes you a coward, unworthy of serving this Nation."

Commerce Secretary Wilbur Ross: "I did not write and am thoroughly appalled by this op-ed. I couldn't be prouder of our work at Commerce and of @POTUS," Ross said in a tweet that referenced Sanders' statement.

US Trade Representative Ambassador Robert Lighthizer: "I did not write it. It does not reflect my views at all, and it does not reflect the views of anyone I know in the Administration. It is a complete and total fabrication," Lighthizer said in a statement to CNN.

Small Business Administrator Linda McMahon: "I am not author of the anonymous @nytimes op-ed. @realDonaldTrump has a clear governing vision for the country and his record of results is remarkable," McMahon said Thursday on Twitter. "I am proud to serve as a member of President Trump's @Cabinet to advocate on behalf of America's 30 million small businesses.

Interior Secretary Ryan Zinke: "No, he did not," a spokeswoman told CNN when asked if Zinke authored the op-ed.

American Ambassador to Russia Jon Huntsman: "Come to find, when you're serving as the U.S. envoy in Moscow, you're an easy target on all sides. Anything sent out by me would have carried my name. An early political lesson I learned: never send an anonymous op-ed," Huntsman said in a statement tweeted by a spokeswoman.

Director of the National Economic Council Larry Kudlow: "Of course I didn't do it!" he said during a Friday press gaggle. "I've spent the last two-and-a-half years developing these policies and it's working."