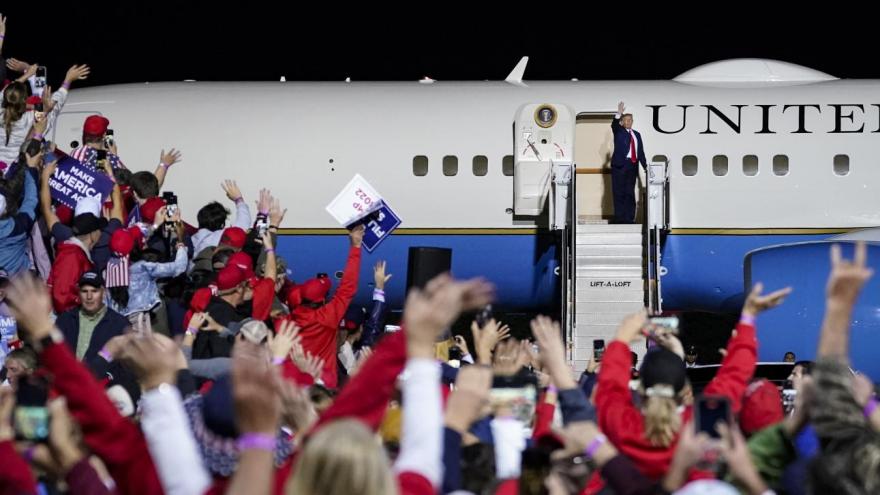 U.S. President Donald Trump boards Air Force Once at the end of a campaign rally at Newport News/Williamsburg International Airport on Sept. 25 in Newport News, Virginia.

(CNN) -- President Donald Trump's positive coronavirus diagnosis has raised questions about the health of those around him, including members of his cabinet and his Vice President.

Here is the testing status of family members and senior government officials around him:

Treasury Secretary Steven Mnuchin, who has had in-person meetings with House Speaker Nancy Pelosi, tested negative on Friday morning, according to a tweet from his spokesperson Monica Crowley. He will continue to be tested daily.

Barr will be tested Friday morning, a Justice Department spokesperson said. He is not experiencing any symptoms and was last in the same room as the President on Saturday.

According to the Department of Homeland Security Deputy Assistant Secretary Chase Jennings, "Acting Secretary Wolf has tested negative three times in the past seven days for COVID-19. He has not been in close contact with President Trump or the First Lady recently." Additionally, he "consulted with the White House physician this week after a DHS employee tested positive for COVID-19 and has been cleared for duty."

General Mark Milley, Chairman of the Joint Chiefs of Staff

Azar told reporters Friday morning he was tested "out of an abundance of caution."

The Office of the Director of National Intelligence declined to comment on Ratcliffe's recent interactions with the President, or on any recent briefings.

Pompeo told the press pool traveling with him in Dubrovnik, Croatia, that both he and his wife tested negative on Friday morning. He said that he has not been with President Trump since the signing of the Abraham Accords at the White House on September 15, adding he's been traveling for the majority of the past 17 days.

The 14-year-old son of Trump and first lady Melania Trump has tested negative for coronavirus, according to Stephanie Grisham, Melania Trump's chief of staff.

"Barron has tested negative and all precautions are being taken to ensure he's kept safe and healthy," Grisham said.