Here's the robotaxi Amazon wants you to ride around in 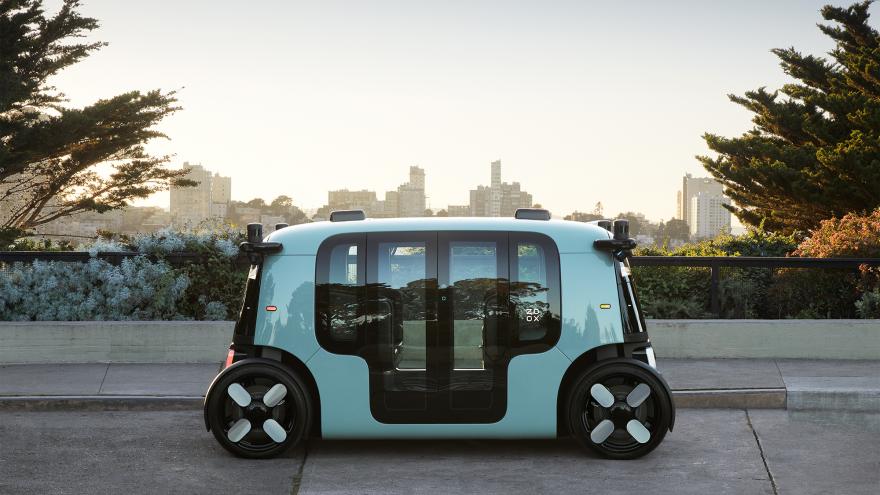 (CNN) -- Zoox, Amazon's self-driving vehicle startup, revealed a prototype of its robotaxi Monday that could one day spend 16 hours a day offering rides in cities.

But if you're hoping for a trip anytime soon, don't hold your breath. Zoox won't say when the public will be able to ride in the vehicle, nor even when Zoox will first test it on public roads. Zoox also didn't say if the vehicle will ever carry Amazon packages.

Zoox's vehicle is a departure from most self-driving vehicles, which resemble the cars of today. It's gotten rid of the steering wheel and brake pedal, saying these features are unnecessary when there's no human driver. Zoox's vehicle seats four, with passengers facing each other to make conversation easier. The doors on Zoox's vehicle slide open, similar to the Origin from Cruise, the self-driving arm of GM.

Zoox's vehicle is a few feet shorter than small sedans like the Honda Civic and Toyota Corolla, to allow for easy maneuvering in cities. It also has an unusually large battery — 133kWh — roughly twice the size of many electric vehicles sold today.

"You want a robotaxi driving as much as possible, and idle as little as possible," Zoox chief technology officer Jesse Levinson told CNN Business, adding that Zoox envisioned charging its robotaxis in the middle of the night. The large battery also contributes to its hefty weight for its size, 5,401 pounds.

Zoox won't be selling its vehicle and instead intends to operate a ridehailing service to complement public transportation in cities. Zoox CEO Aicha Evans declined to say if the vehicle is wheelchair accessible, but said the company has started some concept work on that front.

Zoox is currently testing its vehicle on private roads, but declined to say where. It has a fleet of Toyota Highlanders that it's testing in California and Nevada, and it's targeting to launch its service in Las Vegas and San Francisco. Because Zoox's vehicle doesn't have a steering wheel or brake and accelerator pedals, testing it is more complicated. Other companies, such as Google's Waymo, have already driven millions of miles on public roads. Human test drivers sit behind the wheel of those vehicles and take over if needed.

Zoox was founded in 2014 and purchased by Amazon earlier this year. Like all self-driving vehiclecompanies, it's faced with the huge challenge of developing self-driving software that's safe enough to allow on public roads. The industry has consolidated recently as companies struggle to commercialize the technology. Last week Uber sold its self-driving team to the startup Aurora. Both GM-ownedCruise and Waymo, Google's self-driving car company, raised funding from outside investors. Ford and Volkswagen teamed up to invest in Argo AI, a self-driving vehicle startup.

Levinson said that Amazon has the financial resources to help Zoox fulfill its mission of making transportation safer, greener and more fun.

He declined to say if interested Zoox riders would need an Amazon Prime subscription.