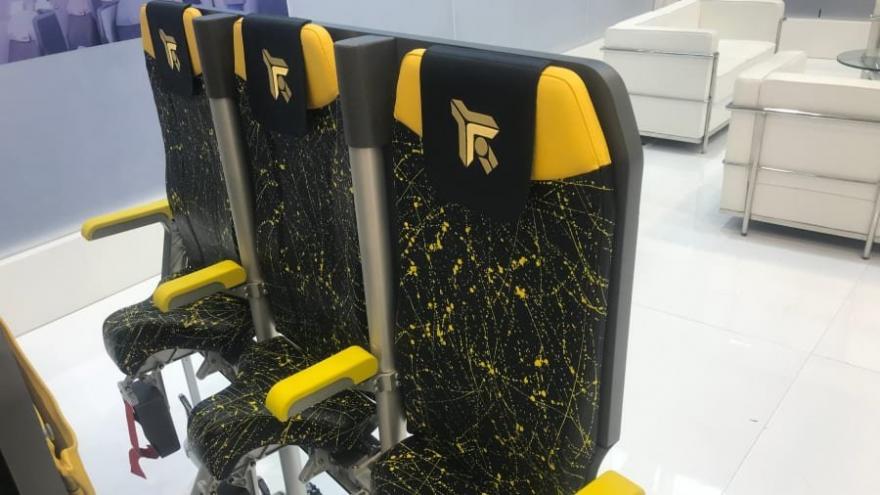 This is Aviointeriors Skyrider 3.0 -- the latest version of its \"standing seat\" concept.

(CNN) -- Perched on a bicycle-like seat, my back's pushed upright and my legs just about fit in the space in front of me.

Last year, at the same conference, Aviointeriors made headlines with its Skyrider 2.0. Now it's back, with version 3.0, ready to rock the world of aviation once again.

First things first: Gaetano Perugini, engineering adviser at Aviointeriors, is keen to stress that the concept's not about creating "cattle class" and cramming in as many passengers in as possible.

"The message is, we do not want to put thousands of people in the cabin, we want to offer a multi-class configuration, which is nowadays impossible if you want to reach the maximum load of passengers," Perugini tells CNN Travel.

Usually, the only way for an airline to reach maximum capacity is outfitting their aircraft entirely with economy seats. The Skyrider takes up way less space than the average economy seat -- just 23 inches -- so the idea is airlines could cram in their economy seats, and still allow other passengers to book other kinds of tickets on the same flight.

"So that means that in the same cabin, you will have standard economy, premium economy or business class and ultra-basic economy -- which is an innovation for the airline and the passenger," Perugini explains. "This is the true reason for the Skyrider."

The design was first proposed back in 2010, but had some structural issues that prevented it from taking off.

The second version, which premiered in 2018, evolved the design, featuring a pole to keep the seat in place.

This new edition is pole-free; Perugini says 2.0 and 3.0 present two different ways in which the seat could be installed and put into practice.

So what's the likelihood of that actually happening?

Perugini says there's been a lot of interest in the seat, although no one has bit the bullet just yet and ordered them.

There's one final hurdle for the manufacturers to overcome -- other than passengers' reactions, that is.

So for now, the Skyrider's tiny size flouts aviation regulations. Could this change?

"When we have behind us a strong customer [...] we can sit around with Airbus or Boeing and explain," says Perugini.

CNN Travel's verdict on the Skyrider sitting experience? Well, it's not as uncomfortable as you might expect -- but as my expectations were low, that's not saying much.

Sitting on the mock-ups at AIX feels a bit like sitting on a bike saddle: fine for a bit, but I'm only there for a few minutes and I can't imagine much longer.

Plus, it doesn't seem well suited to every body type -- or really any body type; whether you're tall or short, you're going to ache and be uncomfortable.

Even Perugini acknowledges it's not necessarily an enjoyable experience, but he reckons for short haul, say a brief hop across Europe, it might work.

"I will be honest, I don't think that somebody is happy to stay eight or ten hours in this configuration," he admits.

"In the short haul, if you want to save money [...] you can hold this -- not fully comfortable position -- for a couple of hours. I think the majority of the people will accept this on a couple of hours flight, a three-hour flight."

I suspect that what you might save on money for your airline ticket you could find yourself coughing up for physio when you land. Plus, it's one thing testing it out on your own, it'd be another being in elbow-jostling distance of a couple of strangers.

Nevertheless Peruguni thinks the seat could take off -- and maybe if it was super-cheap and as comfy as possible, it might be appealing.

"There's an appreciation for this kind of possibility of multi-class arrangement," he says.

"I hope that someone would consider this kind of opportunity -- this is something new. You do not have background for this, you cannot base judgment on previous experiences. We are exploring a new world."