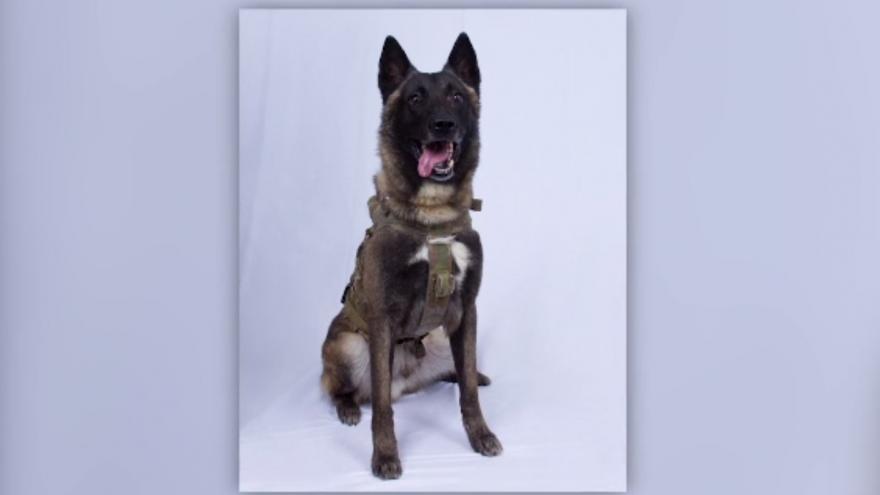 (CNN) -- The heroic dog who helped chase down ISIS leader Abu Bakr al-Baghdadi goes by the name Conan and he'll be making an appearance at the White House soon, President Donald Trump tweeted.

Trump on Thursday declassified the name of the US military dog who was injured in the raid against Baghdadi. Trump also shared that Conan, a Belgian Malinois, will be leaving the Middle East next week and then visiting the White House.

The Pentagon previously declined to reveal the canine's name to protect his identity.

On Wednesday, Trump shared an edited photo, created by the Daily Wire, that showed him awarding the Medal of Honor to Conan.

"Thank you Daily Wire. Very cute recreation, but the 'live' version of Conan will be leaving the Middle East for the White House sometime next week!" Trump tweeted.

On Sunday, when Trump announced that Baghdadi had been killed by US special operation forces in Syria, he revealed that a dog had been part of the operation. Trump said the "talented dog" was injured while chasing Baghdadi down a dead-end tunnel.

"We're not releasing the name of the dog right now. The dog is still in theater," Chairman of the Joint Chiefs of Staff Mark Milley said at a Pentagon news conference Monday.

Milley said the dog was "slightly wounded and fully recovering," but had returned to duty with its handler.

The President later declassified a photo of the dog on Monday afternoon.