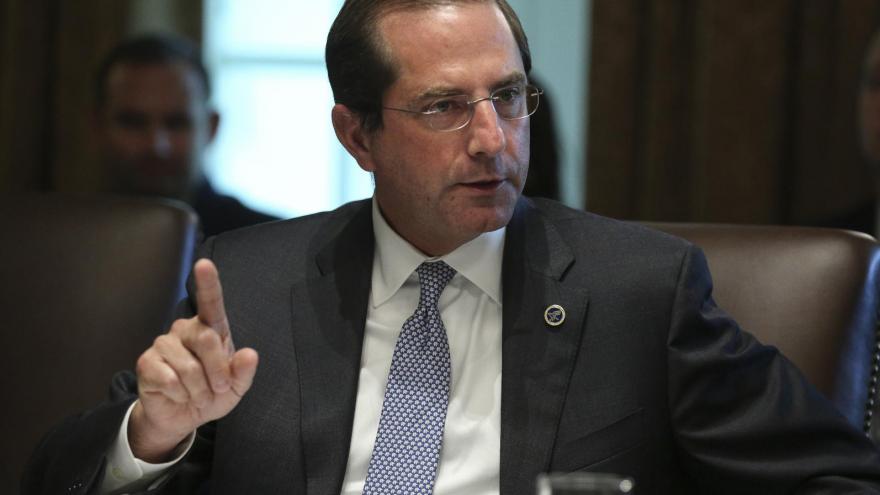 (CNN) -- The Health and Human Services Department will not work with President-elect Joe Biden's team until the General Services Administration makes a determination that he won the election, Secretary Alex Azar said Wednesday, even as public health experts stress that a smooth transition is a critical part of the government's response to the worsening coronavirus pandemic.

"We've made it very clear that when GSA makes a determination, we will ensure complete, cooperative professional transitions and planning," Azar said at a briefing. "We follow the guidance. We're about getting vaccines and therapeutics invented and get the clinical trial data and saving lives here. That's where our focus is as we go forward with our efforts."

Azar was referring to a process known as "ascertainment," a routine recognition by the GSA in the face of a clear presidential victory that would allow the official transition to begin. But although major news networks called the election for Biden nearly two weeks ago, President Donald Trump's campaign has launched long-shot legal challenges in several states, even though they have little chance of overturning the results.

Sources have told CNN that Emily Murphy, the Trump appointee leading the GSA, is working to interpret vague agency guidelines and follow what she sees as precedent to wait to sign off on the election result. But she has not publicly said what the definitive line will be, and states are still in the process of working to certify their results.

Meanwhile, an administration official tells CNN that HHS staffers have been informed that if anyone from Biden's team contacts them, they are not to communicate with them and should instead alert the deputy surgeon general of the communication.

It's not clear how widely the instructions were disseminated at the department, and HHS referred a request for comment to the GSA. A spokesperson for the agency described the instructions as routine said the direction is "given for every transition prior to an ascertainment."

Biden criticized the Trump administration on Wednesday for not officially declaring him the winner, and warned that vaccine distribution could lag as a result of his transition team not being able to work with the administration.

"Soon, we're going to be behind by weeks and months being able to put together the whole initiative relating to the biggest promise we have with two drug companies coming along and finding 95% effectiveness, efficiency in the vaccines, which is enormous promise," he said.

Some leading health experts, including Dr. Anthony Fauci, have emphasized the need for greater cooperation between the Trump administration and Biden's team. Co-chairs for the President-elect's Covid-19 advisory board have stressed that their lack of real-time access to data and information on the supply of therapeutics, testing supplies, personal protective equipment, ventilators, hospital bed capacity or the Strategic National Stockpile is hampering their efforts.

"We haven't been able to sit down with the Trump administration at all, to be able to understand what plans are already in place, where the gaps are, where help is needed, and how we can make sure there's a smooth hand-off after January 20, where the bulk of these vaccines will be administered after that date," Dr. Rick Bright, a member of Biden's Covid-19 Advisory Board, told CNN's John Berman on "New Day" Wednesday.

Trump has repeatedly refused to recognize his election loss, even though Biden won by the same margin in the Electoral College that the President did four years ago and handily won the popular vote. Trump's administration has so far refused to cooperate in other areas, including national security, where Biden has been blocked from receiving intelligence briefings that are customary during a transition.